The NPR News article NASA: Debris From India's Anti-Satellite Test Raised Threat To Space Station discusses last week's antisatellite test by India described further in answers to India just shot down a satellite from the ground. At what altitude range is the resulting debris field?, and yes, as Jonathan McDowell's Public Service tweet tells us, "shoot down" is not what really happens. Instead, a compact object becomes "diversified" into many little pieces, each on its own new orbit and each capable of taking out a spacecraft or possibly even an astronaut.

China has performed such a test and there is still a large group of space debris objects being tracked as a result of that test.

Near the end, the article says:

The U.S. has also used its own satellites for target practice, shooting one down in 1985. It did so again in 2008, when a highly classified reconnaissance satellite malfunctioned shortly after reaching orbit. All of the debris from those tests is believed to have eventually fallen safely out of orbit.

In the new NASA video of the Town Hall with NASA Administrator Jim Bridenstine starting at 07:40 the topic is raised. While India's test and the 2007 test by China are described, the US' 2008 event isn't compared nor even mentioned so I thought I would ask here.

Question: How do the resulting debris fields produced by the US in 2008 and by China in 2007 compare to the one produced last week by India? Comparison should be in terms of risk to other satellites in LEO and/or the ISS.

There are some great excerpts from the ODPO (Orbital Debris Program Office) at NASA Johnson that describe the results of ASAT operations by China (Fengyun-1C in January 2007) and the U.S. (USA-193 in February 2008).

USA-193 was engaged on 21 February (UTC) at an altitude just below 250 km and was severely fragmented via a hypervelocity collision. The majority of the debris fell to Earth within an hour of the break-up, and the remaining debris were left in short-lived orbits [...] By the end of March only a small percentage of the original debris were still in orbit, and the reentry of the last fragment was expected this summer.

U.S. Space Surveillance Network has cataloged nearly 3400 distinct debris from the former meteorological satellite. These debris range in size from 5 cm to nearly a meter [...] Numerous spacecraft have already been forced to execute evasive maneuvers to avoid potentially catastrophic collisions with debris from Fengyun-1C. The International Space Station conducted such a maneuver in January 2012, as have NASA’s Terra, Aqua, and Cloudsat satellites and many other satellites.

As of early 2014, 90% of cataloged Fengyun-1C debris remained in orbit. Today that percentage seems closer to ~75%, based on the FENGYUN 1C DEB TLEs from NORAD. 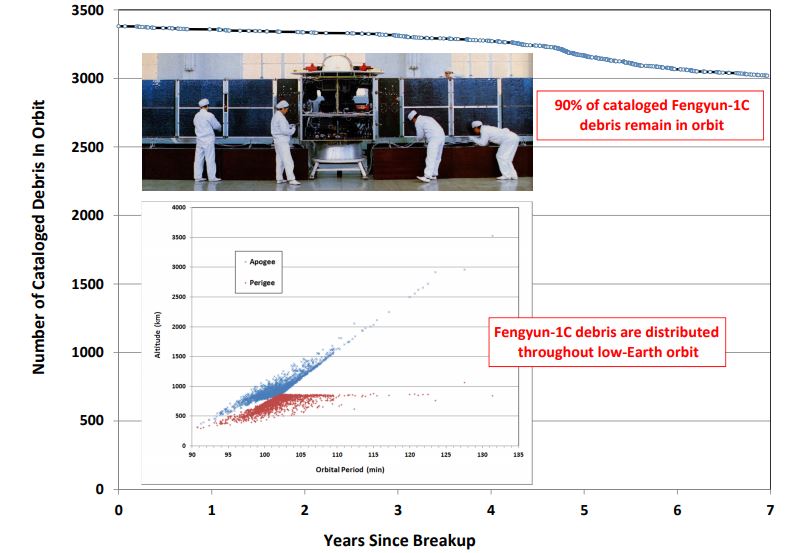 I can't speak for the recent Indian ASAT test as the debris field is still being tracked and cataloged, but this answer suggests an outcome similar to USA-193.

Not the answer you're looking for? Browse other questions tagged debris military china united-states india or ask your own question.

34
India just shot down a satellite from the ground. At what altitude range is the resulting debris field?
4
How much could a full-blown Starlink constellation contribute to a future Kessler scenario? What would be the worst-case scenario?
6
How many of these six military "orbital threat" techniques have been demonstrated in a (more or less) publicly recognized way?

9
How much of the space debris around Earth is man-made?
11
How does QUESS, China's quantum communications satellite experiment, relay entangled signals?
2
How do satellites remain safe from space debris and meteorites?
34
India just shot down a satellite from the ground. At what altitude range is the resulting debris field?
5
What did India's recently tested ASAT vehicle really look like?
3
What is Space Policy Directive 3 and how does it relate to the Space Fence?
7
Does the US Navy guard SpaceX drone ships and make sure bad actors don't abscond with critical technology on the high seas?
4
How many spy satellites could be destroyed before the debris field would be too massive to launch moon or mars manned missions?
10
Is India having the military capability to "take out" a satellite in orbit still in question?
12
How did the Mercury Seven compare in military seniority?