This question asks if this type of steam engine would work: Could a steam Engine outperform other electric producing devices in space? this not a sterling engine since it has far less moving parts.

Would this rotating device in orbit wobble in orbit or stay in place? Could momentum be produced from the movement the liquid boiling from 1 side to the other in order to gain forward momentum through quadropole moment? 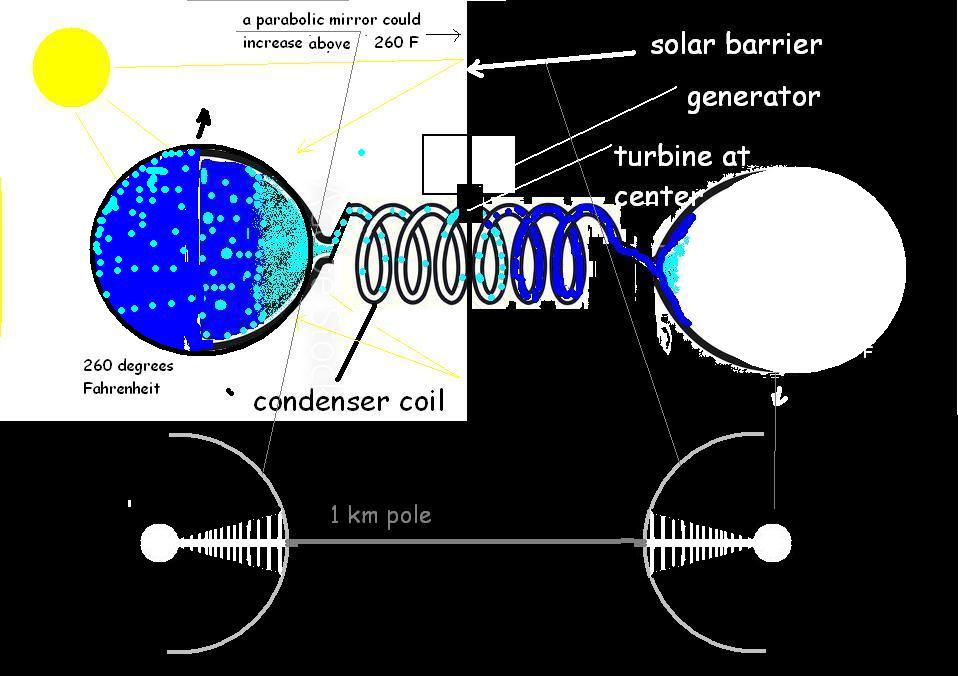 Related Could a satellite in LEO "pump" or change mass distribution to gain forward momentum?

This is a partial answer.

The question is a good one, and it's quite a hard one to answer. I don't have the know-how to fully answer it yet, but I'll try get the ball rolling at least.

We like to mentally separate a satellite's position from it attitude, and treat them as separate problems, because it makes solving the math for each one easier if it can ignore the other one.

However, remember that in the early days of satellites, gravity gradient stabilization was used, and this is based on coupling between a satellite's position and its attitude. The boom ended up pointing in the nadir direction, and for an orbiting satellite that direction is always changing. 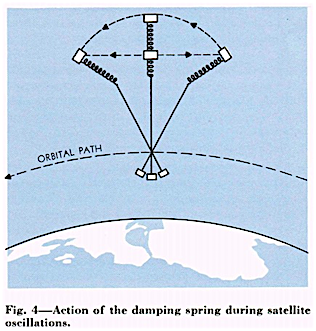 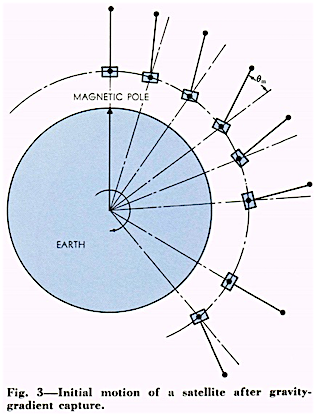 above: Borrowed from the "story of Spaceman Spiff" in this answer and sourced from Gravity Gradient Stabilization of Earth Satellites by R. E. Fischell.

Now with attitude control based on thrusters and momentum wheels and a complicated algorithm written by some people off in a room by themselves, or simply purchased, it's easy to forget that position and attitude are coupled.

This question brings that fact back to visibility for two reasons:

This means that the center-of-mass (CM) and center-of-gravity (CG) are not the same point!

This will further complicate the coupling between position and attitude, and even make it a challenge to define what point would even be used to represent the spacecraft's position.

Would this satellite wobble in orbit...?

The main force on the spacecraft will be the Earth's gravitation, and the two largest terms will come from the central acceleration that we calculate from

and the part of the quadrupole term due to Earth's oblateness captured in $J_2$ as:

This is from this answer and ultimately from Wikipedia.

Both of these have gradients, and the shape of those gradients differ. This means that both the force and the torque on this extended spacecraft with moving internal mass will have a complicated time dependence.

That will lead to a complicated wobble in both spacecraft position (relative to how a compact craft would behave in a similar orbit) and in spacecraft attitude. In fact, it would be...

Would this satellite wobble in orbit... creating momentum?

If you could synchronize the mass exchange to be periodic and have some specific harmonic relationship with the orbital period, then you might be able to manage the wobbling and put it to good use. I don't know what that use would be yet, but I won't be surprised if one can be identified.

To that end, the similarly intriguing and (in my opinion as-yet inadequately answered) question Could a satellite in LEO “pump” or change mass distribution to gain forward momentum? addresses a kinematically similar situation. I think the answer is yes, this could probably change the orbital angular momentum in some way, either periodically, or continuously.

If only I remembered how to construct a Hamiltonian for this system and then put it to good use!

Not the answer you're looking for? Browse other questions tagged artificial-satellite propulsion engines physics design-alternative or ask your own question.

7
How to calculate the planets and moons beyond Newtons's gravitational force?
6
Could a satellite in LEO “pump” or change mass distribution to gain forward momentum?
4
Rotating in orbit?
3
Could a steam Engine outperform other electric producing devices in space?

11
Could Earth-lunar flybys be repeated consecutively without the use of propellant?
6
Could a satellite in LEO “pump” or change mass distribution to gain forward momentum?
3
Why is Angular Momentum of Satellite Rotating in ECI Frame?
4
Could a “nuclear turbo-jet” be built?
5
Could the helical engine work?
1
Could a horseshoe magnet help a satellite stay in orbit?
3
Could the kinetic energy in the Sun's solar wind power an ion propulsion system for an interplanetary spacecraft?