How far did Hayabusa-2 back off before the “bomb” went off?

The charge is carried on the Small Carry-On Impactor (SCI) device.

This is a 14kg conical container attached to Hayabusa-2 and packed with plastic explosive.

The SCI is due to separate from Hayabusa-2 at 01:56 GMT on Friday at an altitude of 500m above the surface of Ryugu. That will kick off a 40-minute countdown to detonation. When the device explodes, it is expected to punch a 10m-wide hole in the asteroid.

In the meantime, Hayabusa-2 should have manoeuvred itself to hide away on the other side of the asteroid, shielding the spacecraft from any flying debris.

The answer to How far will the debris cloud from Hayabusa-2's touch-and-go sample recovery travel around Ryugu? Will any have escaped to heliocentric orbit? makes it clear that even low-velocity projectiles produced near Ryugu's surface could travel in Ryugu-centric as well as heliocentric orbits. Of course since the Ryugu-centric (elliptical) orbits intersect the surface at one point, they'll intersect somewhere else as well, and either come gently to rest or scatter secondary additional projectiles.

So just because Hayabusa-2 will move to the other side doesn't mean it can't get hit by something.

I'm curious what kinds of debris Hayabusa-2 mission-planners at JAXA might have thought about ahead of time, so I'd like to ask: How far did Hayabusa-2 back off before the "bomb" went off?

Lower volume before playing video because it contains an Earth-shattering kaboom!!

The answer is that the Hayabusa-2 was 4.61 km from the SCI when it detonated.

The link provides a mission status briefing from JAXA which describes the entire sequence of events, including positions. Slide 10 has the relevant mission data laid out on a grid. 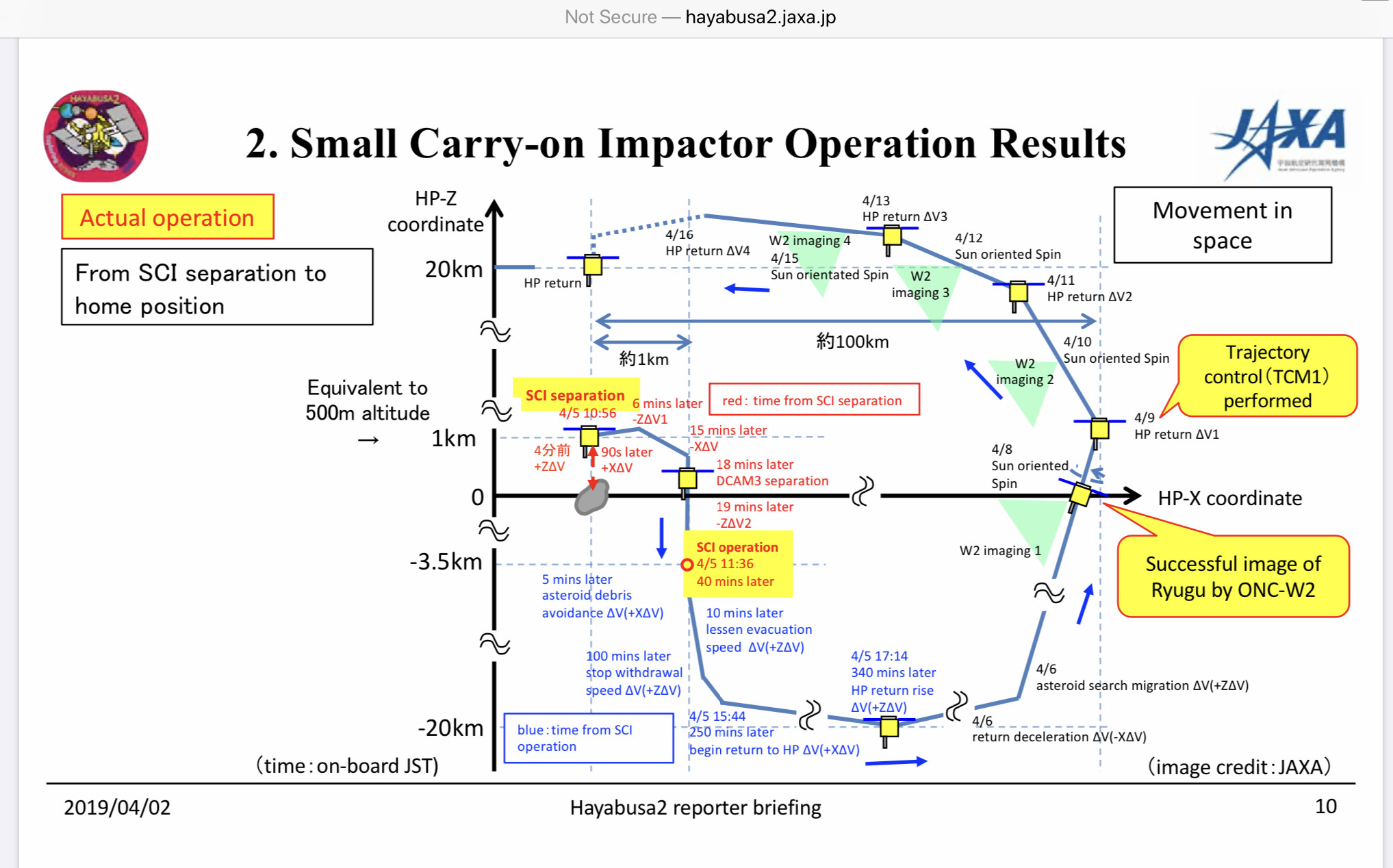 Before the bomb went off, I’m interpreting to mean explosive release of the copper impactor. 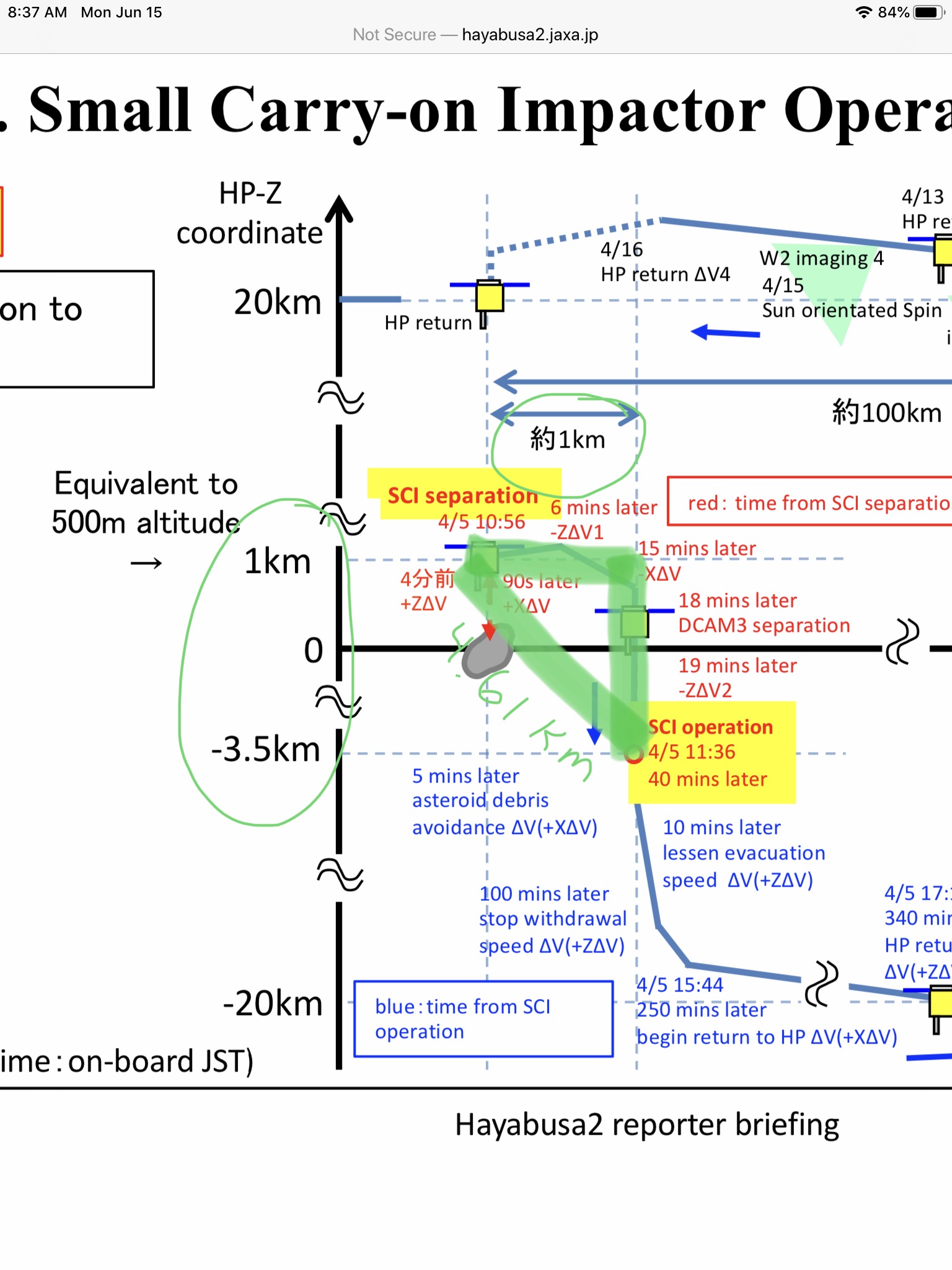 In a sense, another bomb went off again when the copper impactor struck Ryugu 500 M below the SCI. The answer for that is 4.12 km. 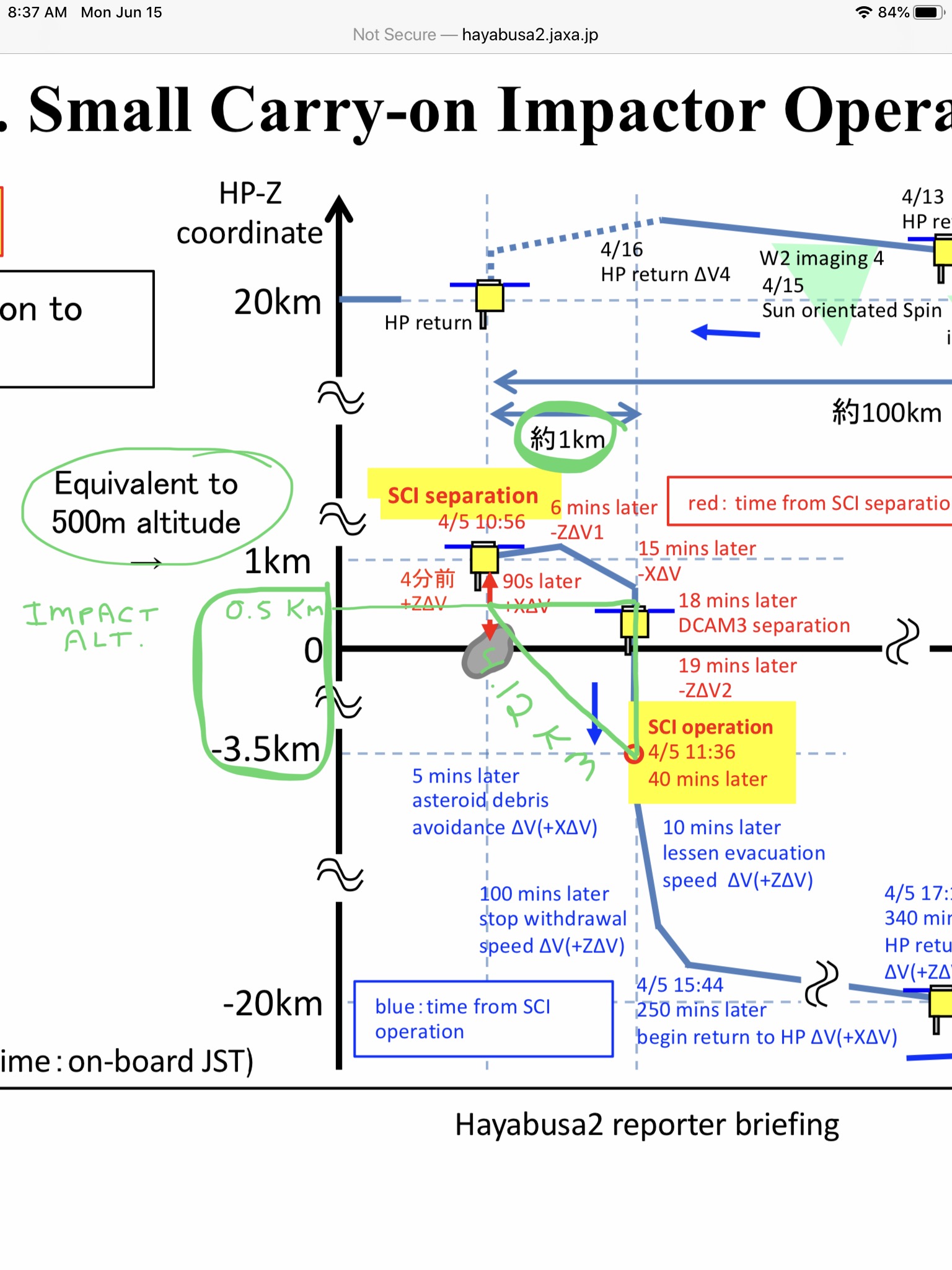 I obtained the chart from data I logged and reverse-engineered for Hayabusa OnBoardCamera and LIDAR; unfortunately telemetries feed broke right after SCI operation, for several days: 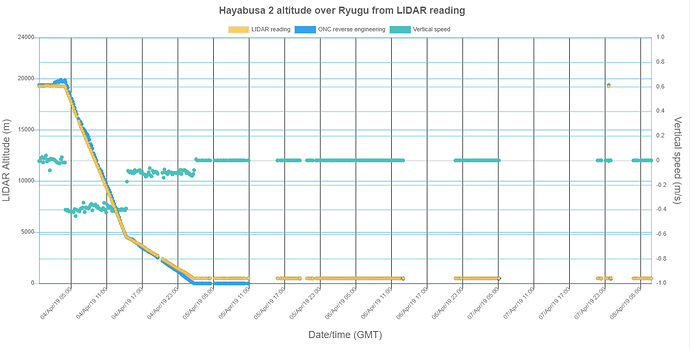 At the scheduled time for the SCI separation (01:56 GMT), the LIDAR reading was around 469 meters from surface; explosion was planned at 02:36 GMT , but all readings after 2:07:10 GMT stated "482 m" for several days, so it looks like this information is not available in my amateur log. 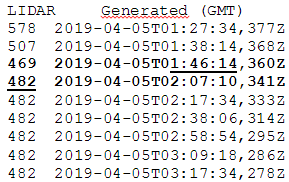 Data from JAXA site; although they don't cover SCI explosion timeslot, maybe other similar files are availble on the site:

Not the answer you're looking for? Browse other questions tagged debris jaxa hayabusa2 ryugu explosives or ask your own question.

9
How far will the debris cloud from Hayabusa-2's touch-and-go sample recovery travel around Ryugu? Will any have escaped to heliocentric orbit?
9
Was Hayabusa-2's plastic explosive charge the largest charge detonated beyond LEO?
2
Could ejecta from asteroid Bennu enter into temporary orbit around it? If so, how?
2
CesiumJS: Hayabusa 2 location w.r.t Earth

9
About how far was debris scattered from the Columbia incident?
9
How far will the debris cloud from Hayabusa-2's touch-and-go sample recovery travel around Ryugu? Will any have escaped to heliocentric orbit?
9
Was Hayabusa-2's plastic explosive charge the largest charge detonated beyond LEO?
4
How many spy satellites could be destroyed before the debris field would be too massive to launch moon or mars manned missions?