What does the core stage of a launch vehicle mean?

I have seen the use of the term 'core stage' in the context of space launch vehicles. I am not able to clearly understand what it exactly means? I have learnt about launch vehicles having multiple stages: first, second and so on. Is the core stage just a different name for the first stage itself?

I tried to google it but couldn't get a clear meaning for it. I had a look at the SLS core stage fact sheet by NASA which says a few things about core stage.

The information you found is specific to the SLS.

In general, the term 'core stage' is used when the rocket also uses boosters. Boosters complicate things when you talk about stages. The term "First stage" can include the boosters, for instance.

So a term was needed for a rocket stage that is started on the launch pad, which excluded the boosters. This is what 'core stage' is used for. 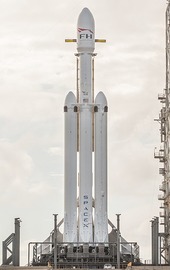 Here's another example, the Falcon Heavy. The boosters are the same size as the core stage, although the core stage has a stronger construction and uses a different burn profile, so it burns longer than the boosters.

In this case, the core stage and boosters both burn RP-1 and LOX.

The flight computers and avionics are usually installed in the last rocket stage, because then you only need one set of computers. When you install computers in the first stage or core stage, you have to hand over operations to another set of computers when the core stage separates.

Not the answer you're looking for? Browse other questions tagged launch-vehicle stages or ask your own question.

8
How can the same upper stage be optimal on a common core booster as well as on a single booster?
7
To what extent, if any, does the exterior paint color of a launch vehicle affect its propellant & vehicle thermal management?
5
Quantitative benefits of Atlas II's engine-dropping or 1.5 staging?
12
Highest stage count that are used one right after the other?
2
How common are "parallel stages" in a launch vehicle?
2
Need help understanding staging shown in infographic of Titan launch of Hexagon satellites
2
How many stages were used to put Iran's satellite NOUR 01 (45529) into its orbit?
5
About optimal staging and structure fractions
7
KARI's homegrown KSLV-II almost hit the target orbit on its very first launch. How many OLVs can boast success on the first flight attempt?