How thick does lunar regolith ever get? Has the thickness been measured and mapped by satellite?

Discussion in comments below the question Couldn't we just clear away the Moon Dust? have lead me to wonder if

My feeling is that it never gets more than say 20 cm and is usually a lot thinner, but I have no idea.

First, we have to define 'regolith'. NASA uses the term for all unconsolidated debris, including large boulders:

The lunar surface is covered by a layer of unconsolidated debris called the lunar regolith (fig. 53). The thickness of the regolith varies from about 5 m on mare surfaces to about 10 m on highland surfaces.

The stuff you're probably after is the fraction fine enough to be called "dust".

Lunar dust generally connotes even finer materials than lunar soil. There is no official definition of what size fraction constitutes "dust"; some place the cutoff at less than 50 μm in diameter, while others at less than 10 μm.

All of these categories are mixed together, with smaller particles filling the space between larger particles.

At the surface, you tend to get a layer of dust.

Since the Moon lacks any sort of an atmosphere, the upper few millimeters of the regolith is exposed to the bombardment of micrometeorites and to solar wind irradiation. The extensive bombardment by micrometeorites, which continues today, breaks up soil particles and melts portions of the soil.

Lunar dust builds up at a rate of 1 mm/1000 y. Impacts can break up rock, but can also consolidate particles by melting:

We have some data on regolith depth, but it's incomplete. The best data is the samples taken by the Apollo missions, but those are very localized. Whole-surface data relies mostly on photos and various estimation techniques. 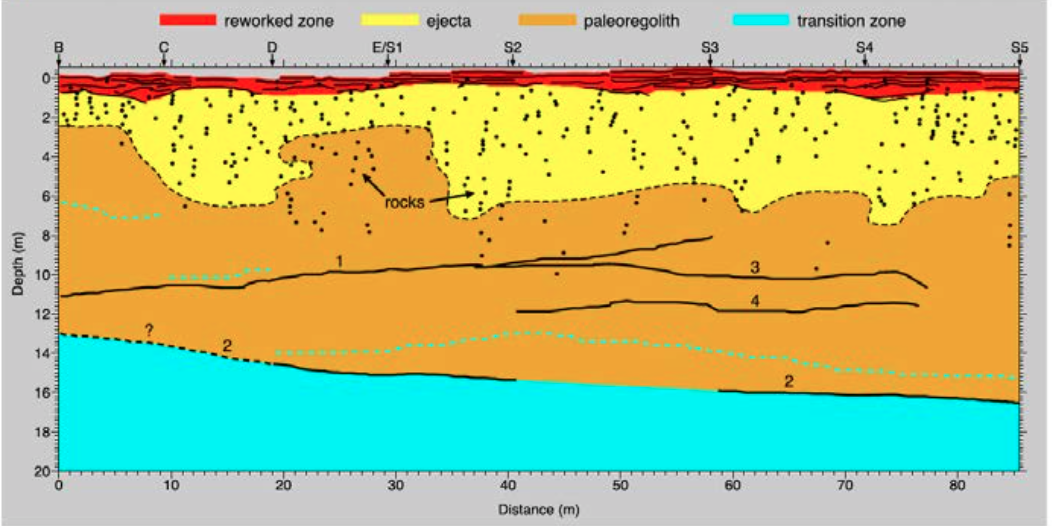 This is a Ground Penetrating Radar map made by Chang'e 3's rover Yutu.

Radar measurements from Earth can give an indication of surface grain size: 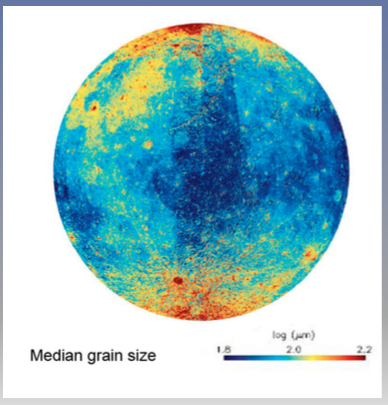 Not the answer you're looking for? Browse other questions tagged the-moon regolith or ask your own question.

14
Cubesats in lunar orbit and beyond - how does communication work?
3
How did the Apollo Moon rocks get away from NASA and into the public?
9
How does the ISS Transit Finder website get the position of the ISS so accurately?
3
How often does a geostationary satellite enter into a Lunar shadow?
2
How fast were the Lunar Command Module and Landing Module traveling around the Moon when they reconnected?
4
How does Lunar Gateway compare to ISS and MIR