I'm doing a lot of research on amateur sattelites and I am trying to understand everything.

What does the term "secondary payload" mean when referring to amateur sattelites?

We already have a similar question in How does a single rocket place multiple satellites into orbit? with answers that might help you get an overview of how secondary payloads can be deployed, but OSCAR (Orbiting Satellite Carrying Amateur Radio) satellites were actually piggybacked on rocket launches as ballast weight. Gulf of Maine Research Institute article explains it as:

It is simpler and cheaper to ballast a rocket with dead weight than to reduce the thrust. As a result, it is possible to add secondary payloads of homemade satellites to multimillion-dollar NASA missions at minimal costs.

I wasn't able to find any information on where exactly they were mounted and how did their adapters look like, but I'd presume they were mounted on some custom made secondary payload adapter and used some simple deployment mechanism, since these satellites wouldn't really be considered first class passengers. Perhaps they used something similar to this DemoSat design that was meant to deploy nanosatellites: 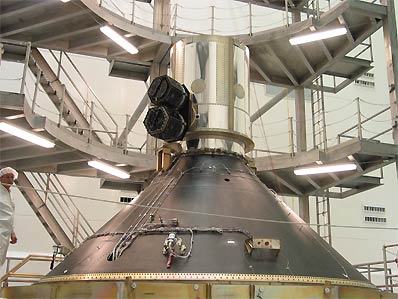 The craft are mounted atop the black cone-shaped adapter that mounts to the rocket
as seen in this image (Image credit: U.S. Air Force, Source: Spaceflight Now)

This deployment design mounts secondary payload nanosatellites on the primary payload adapter. They could be jettisoned with explosive bolts, compressed gas, or even by spring release or levers, and initiated by jettisoning the payload fairing, remote or onboard computer triggered, or simply by centrifugal force, if the primary payload or the launching vehicle are spin-stabilized.

These secondary / auxiliary payloads might even serve as primary payload ballasts for the duration of the launch by positioning them where needed and/or changing the length and weight of their adapters to balance the mass distribution of the whole payload along the long axis during spin testing. Or any combination of mentioned options, or perhaps something I didn't even think of here. For example, more complex launch adapter for nanosatellites could use multiple launch cassettes and might look like this: 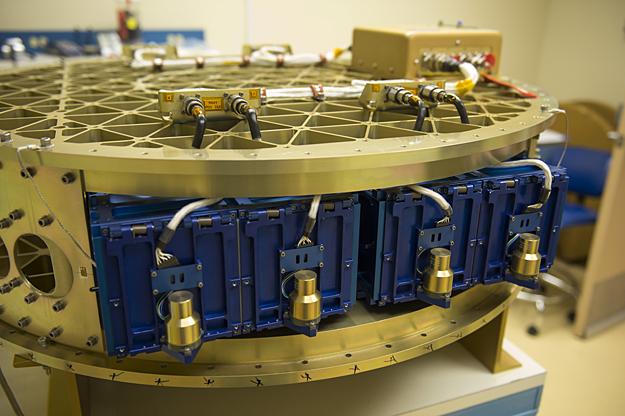 Or they could even be delivered in resupply vehicles to the International Space Station and deployed using JAXA's J-SSOD small satellite deployment system installed in the Kibo module's airlock, and of course when Space Shuttle was operational, they could be deployed from there too.

So there's probably thousands of ways to piggyback small, feather-weight micro- or nano- or femto-satellites on a launch vehicle into orbit. For example, NASA is running one such program under the name CubeSat Launch Initiative where you should find more information how these things are handled nowadays.

You're probably asking yourself by now, where am I going with all these broad descriptions of what constitutes an auxiliary payload? Well, I guess that's the point, that there isn't any simple definition for it. Perhaps the easiest would be saying that the major difference between main payloads (can be more of those, so I'll avoid calling them primary, secondary,...) and auxiliary payloads is that the latter don't cover the cost of launching a vehicle into orbit, and all subsequent differences stem from this fact.

Like, for example, that the launch vehicle design and main payload integration processes most certainly won't suffer huge additional costs to integrate auxiliary payloads, but they might be piggybacked if they either come useful (i.e. some dead weight would have to be used for ballast anyway), or adding them to the launch manifest costs less than the value they bring to the whole project (e.g. public exposure). Since value can be a subjective term, the definition for these auxiliary payloads will vary too.

Another term is 'piggyback payload': launchers usually have some performance margin. When this margin is comfortably large, it may be profitable to sell the opportunity to ride 'piggyback', or the paying agency may want to subsidize university research. The price is quoted sometimes as \$12K to \$18K per sub-1 kg payloads.

Secondary payloads will be deployed into the same orbital plane, often before separation of the main payload. Insertion accuracy is much inferior to normal payload's requirements.

Not the answer you're looking for? Browse other questions tagged artificial-satellite secondary-payload or ask your own question.

20
How does a single rocket place multiple satellites into orbit?
7
What is a "payload adapter"?

9
Was Hipparcos Satellite really necessary? Can't Hubble do everything that Hipparcos did?
7
How do the secondary payload abilities of different launchers compare?
4
Examples of short satellite durations?
17
When have secondary payloads damaged the primary payload of a launcher?
2
Launch cost of a small satellite
5
LAGEOS 1's time capsule's positioning in the sattelite
3
Why is Angular Momentum of Satellite Rotating in ECI Frame?
7
Why do rockets coast before secondary payload deployment?
3
How do I find my coordinates using x, y and z variables and trilateration?
5
Interplanetary secondary payload