Why was the image sensor design for Juno so… odd? [duplicate]

I attended the North Eastern Astronomy Forum this year and one of the speakers was mentioning that JunoCam will not be working because of the angle of the spacecraft. He was giving a lecture on what amateurs could do to replicate its functionality.

During this lecture he mentioned that JunoCam is using a very simplistic banding on its camera sensor. Instead of going the route that a lot of DLSR's go which utilizes Debayering they decided to do a banded sensor approach. I suppose this is analogous to having multiple monochrome cameras that detect different wavelengths of light. The wavelengths that they chose were, red green and blue with 2 additional NIR spectrum filters. So, basically, their camera takes single shots capturing: 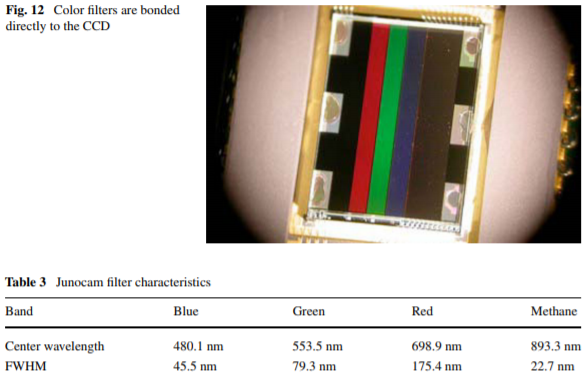 The end result of capturing each of these spectrum in monochrome is an image like this:

So, essentially, to get a full-color image, you need to slice these images on the lines multiple times and put the data into the correct channels. Then you need to stitch each channel back together to get the full image and proceed to do additional processing on each piece to correctly align them. I'm not even mentioning planetary derotation and orbital motion compensation as this is already a decently complicated process.

Why did they choose such a complicated methodology of image capture, when they could've used an easier method? The whole banding of channels is really bizarre for a camera, I've heard of nothing quite like it before (let me know of other instances where they've done this). I understand JunoCam was indeed an afterthought, but if you know why this specific design choice was made I'd love to hear more about it.

Also, if you're interested in helping out the JunoCam project, head over here to see what NASA needs from amateurs during the JunoCam downtime.

update: There is a much better explanation in @DavidHammen's answer to How is JunoCam different from a normal CCD camera?

Why did they choose such a complicated methodology of image capture, when they could've used an easier method?

That is probably false premise, you certainly haven't demonstrated how they could.

To get the best, single pixel resolution, you don't mess with Bayer filters. And a Bayer-like filter with five colors is a nightmare.

Look at GAIA's sensor arrangement, which works on a somewhat similar principle.

both below: Gaya's CCD array, from Spaceflight 101, image credit: ESA and Astrium respectively.

Not the answer you're looking for? Browse other questions tagged imaging juno or ask your own question.

14
How is JunoCam different from a normal CCD camera?
5
Given that JunoCam is mainly for outreach, how bad is it as a scientific instrument?

10
What makes materials on the Moon look so different when the sun is high?
4
Will there be joint observations from earth and the Juno spacecraft when it reaches Jupiter?
8
When can we (public) expect to see the first optical images of Jupiter from the Juno spacecraft?
35
Why are photos from Juno such low resolution?
1
How could the recently explained “glints” seen by DSCOVR appear so compact considering the finite size of the sun?
8
What exactly is the interaction that blocked Juno's data downlink near solar conjunction?
3
What causes Hyabusa-2's close-up images of Ryugu to be dark in the corners?
4
Did any lander or rover photograph the sun rising or setting during a Martian dust storm?
1
Does the Juno spacecraft have an “open signal, by design”?