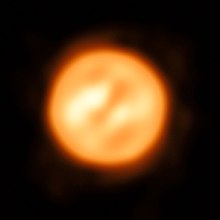 35
When will we have the technology to directly observe an exoplanet with significant clarity?
1
Future plans and advances for improved extrasolar planet imaging; has anything changed since 2019?

8
Can we detect atmosphere on exoplanets?
5
Can image-stacking allow this 0.25 m satellite telescope achieve 0.65m resolution?
10
What might the first deep space telescope using the Sun or Jupiter as a gravitational lens be like?
2
What will (likely) be the first separately-orbiting coronagraph to be deployed in space?