What have been the most common causes of mishaps or failures with various cubesat mechanisms & components?

I am keen to know more about common CubeSat mechanisms & components (antenna / solar array deployments / thruster / momentum wheel / robotic arm problems) that have worked well in the past and those that a fairly risky or unreliable etc. based on past experiences? Eg: thermal knife mechanism (ISIS) for CubeSat antenna deployments seems to have been flight proven so it looks reliable Also keen to know about other factors that may have contributed to failures or mishaps? Eg. not all space environmental factors considered etc.

This graph shows the common failure modes experienced during the first 100 cubesat missions.

Note the large fraction of failed missions that never made contact with the ground after launch; no failure analysis on those. 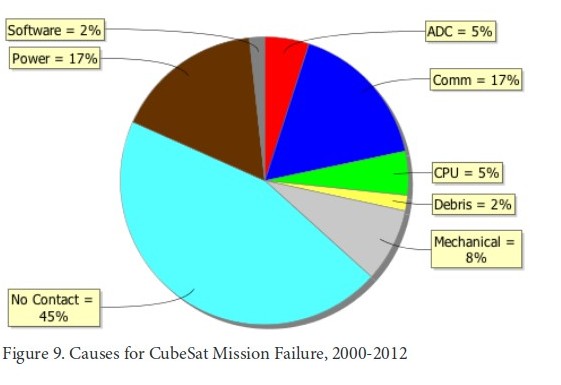 I assume ADC is Attitude Determination and Control, but it doesn't say so in the paper.

This question mixes up a few concepts.

First, something being "flight proven" in a cubesat is far different from being "flight proven" in a traditional large spacecraft. It is not being successful in space once that makes a device reliable, but rather the quality control of the production facility and the extensive testing done on ground, both prior to integration on the final satellite.

So if tell me that a star tracker flew on a commercial geostationary satellite from a traditional manufacturer, I'm pretty sure it is very reliable! Even then I'll ask for documentation about the past tests conducted on engineering and qualification units, and should there be any change on the design or the production method, I'll ask for delta-qualification tests, to ensure the change will not introduce failures. Also, I'll check statistical reliability studies so I can estimate the likelihood of failure over time. These testing and documentation process is costly, expensive and (AFAIK) done only for operational missions. (i.e. commercial, military or scientific, but not tech demonstration).

Meanwhile, it is already praiseworthy if a cubesat team has conducted thermal analysis properly. Maybe they did some basic testing such as putting into a vibration or thermal chamber, maybe they didn't. If they did, I really doubt that every component underwent a qualification campaign at equipment level, yet the cubesat got launched. This doesn't mean that every piece will fail, but rather tells that you can't assume that all the care taken on a large mission was also taken for a cubesat, which effectively lowers the value of a piece of hardware having being "flight proven" in a cubesat. I would also not be so sure you would hear about a cubesat failing, so maybe a given component was flown on a mission that never made first contact as is often the case, yet detailed information on the failure would be hard to find.

Usually, if you need figures for the reliability of a component you'd have to ask your supplier. Because the cubesat market is not that mature yet, no manufacturer can boast large reliability figures, and is working on improving their practice and methods. This means that you'd need at least an NDA to receive such information (which would be subject to change without prior notice). Even then, I'd expect you to receive inconclusive information, and only after a purchase order is signed.

Keep in mind however that the mentality around small satellites is that one is better building multiple satellites such that the loss of a few of them can be afforded. I.e. launch three cheap, small and unreliable satellites for less than the cost of one big expensive and reliable one.

Not the answer you're looking for? Browse other questions tagged artificial-satellite robotic-missions robotics robotic-arm or ask your own question.

8
What are the common space application adhesives used in Earth orbiting satellites?
47
What would be the (most difficult) challenge to make a 10,000 year satellite?
11
What is the most popular programming language in space?
2
How many robots have been at, in, or on the ISS?
8
What is the most aerodynamic Satellite?
1
what are various best practices/processes associated with orbit change manoeuvres of LEO / GEO satellites?
2
What are the top most used satellite control system, flight dynamics solution at the moment ? Approx costs?
1
What is the most likely range of orbits for on-orbit servicing satellite?
35
Have any satellites been lost or damaged on their way to the launch site (ground/sea transport)?