Going to the Lunar gateway during the upcoming solar maximum! What will the radiation environment be like?

EarthSky.org's What will the sun do next? says:

On December 6, 2018, the Center of Excellence in Space Sciences India (CESSI) reported that two of its scientists have made a prediction for the upcoming sunspot cycle. Solar physicist Dibyendu Nandi and his Ph.D .student Prantika Bhowmik devised a new prediction technique, which simulates conditions both in the sun’s interior, where sunspots are created, and on the solar surface, where sunspots are destroyed.

Earlier predictions (like this one) have suggested the coming sunspot cycle 25 will be weaker than the current cycle 24. But, based on their model, Nandi and Bhowmik believe cycle 25 might be similar to or even stronger than 24. They expect the next cycle to start rising about a year from now and to peak in 2024. Their work was published December 6, 2018, in the peer-reviewed journal Nature Communications.

There are plans to build a Lunar Orbital Platform or Gateway around the Moon for astronauts to visit, and use to travel to the Moon's surface.

The goal of this within five years has been mentioned, though it might take a little longer. Either way this will be happening during a period of increases solar activity, possibly even near solar maximum!

Bhowmik and Nandi prediction for sunspot cycle 25 compared with the current sunspot cycle 24. The work suggests the coming sunspot cycle will be similar to or slightly stronger than the activity levels that are just ending. Image via CESSI. 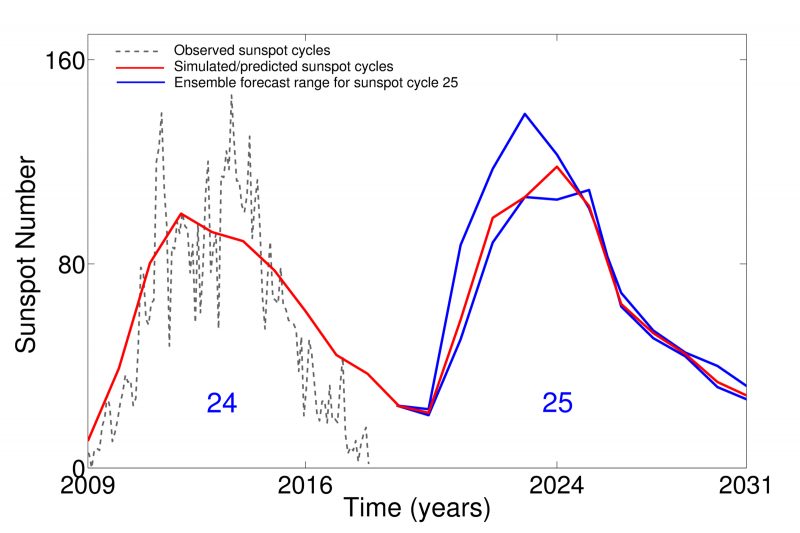 How this is managed is a bit complex. The short answer is there may well be some clever ticks but weight constraints mean an effective radiation shield is not really a feasible option and apollo-style steel/aluminum capsules are near guaranteed, with the addressing being left to management things like returning crews near their limit of exposure.

As for the total time, it's a stats thing, not an absolute time. This is because earth-facing CMEs are not frequent enough to be smooth over the time periods considered. However, in terms of orders of magnitude:

The number of CMEs varies with the solar cycle, going from about one per day at solar minimum, up to two or three per day at solar maximum. So significant, but not a game changer, even if these where the only source of radiation. However radiation doses are pretty borderline for long moon missions so that factor of 3 might be pretty important.

NASA estimates for the Apollo missions were that: a 9-day mission to the Moon which led to 11.4 mSv was about the worst to date. They also consider 2.50 Sv a cutoff for the max lifetime exposure for a male 35 year-old of which only 0.5 Sv is permitted annually. So in theory the time span is of-the-order-of stay being limited by the lifetime limit not the annual limit. There the astronaut turns out to be more of a deal for them than solar weather: a 25yo female is only permitted to be exposed to 1 Sv, but a 55yo male 4 Sv.

Not the answer you're looking for? Browse other questions tagged the-moon radiation safety health lunar-gateway or ask your own question.

15
How big of a problem is the Lunar eclipse in April 2014 for LADEE?
9
How quickly do the Van Allen radiation belts degrade solar panels?
4
When estimating radiation doses inside a lunar habitat, what assumptions are made as to shape?
6
What data was used to estimate accumulated radiation dose for the Apollo astronauts?
14
Why is the US building a Lunar Orbital Platform-Gateway (LOP-G)?
4
How will the Lunar Gateway go to L2 and L1; how much delta-v is needed?
5
How do I calculate the characteristic energy for a rocket to near rectilinear halo orbit where the Deep Space Gateway is going to orbit the Moon?
4
Question about orbital mechanics and trajectories for a space infrastructure project/climate adaption idea
10
Will Soyuz spacecraft be able to visit the Lunar Gateway?
2
What does lunar dust smell like?