How good is Stratolaunch vs Falcon9 as a first stage?

With the Stratolaunch flying this week I was interested in seeing how good it was compared to a Falcon9. I figured comparing energy contribution would make sense. The stats as best I can find:

So it looks like Stratolaunch as a first stage provides less than a seventh as much energy as a Falcon9 first stage. Does this look reasonable or is there a better way to look at this?

How much of the Falcon9's first stage fuel is used to get to a Stratolaunch energy level? It is a lot more than a seventh but I don't know how to figure this.

Breaking down the cost of a space journey is typically not done with what energy is required, but by the Delta-v (change is velocity) required. In the case of an orbital launch, that's 8 km/s to get orbital velocity + some extra costs. In the case of Earth, that some extra costs part is a bit troublesome since the rocket has to fight against strong gravity for quite a while, and gain sufficient altitude to avoid the thick atmosphere.

The altitude numbers are also relevant, but the main observation to be made there is that the Falcon first stage deals with most of the atmosphere, while Stratolaunch is still low enough that the air can still lift a plane.

The above should show that the Falcon 9 first stage is a much larger part of the launch configuration than the aircraft is for Stratolaunch. In a sense, this is "higher performance".

Applying the inverse rocket equation to that 1600 m/s velocity gap gives a mass ratio of about 1.5 (about 170t to the same velocity that the Falcon stage delivers to), which makes the Stratolaunch aircraft a slightly heavier lifter than what Falcon 9 is. In a another sense, this is also "higher performance".

A third way to measure performance is the cost of a launch. Since no actual Stratolaunch missions have been flown yet, a plausible cost comparison is not yet possible.

As pointed out the ranking of best to worst really doesn't make sense here. There are a lot of issues that come into play. (Even if we ignore things like reliability and cost...).

The main reason is that it hugely depends on what options you have for the next stages. If you have very good rocket technology (high TWR and ISP) then high mass to low speed is more helpful than low mass to high speed, compared with poorer tech.

So the question "how much faster to you have to go to make it worth having half the mass?" doesn't have a natural answer. It depends on the final goal and what stages you have left.

There are also some other things that make this question really hard to give a meaningful answer to, for example:

[*] Imagine the TWR was 1.001 but somehow had 1000 time the dV, it would gain height and speed, but would be using almost all of the thrust to fight gravity with very little gain however once in space this is all gets used to add energy to the orbit.

Keeping with the energy criterion as a measure of "goodness" in spite of its limitations, I found this Falcon 9 altitude/velocity graph and the spreadsheet from which it was built. 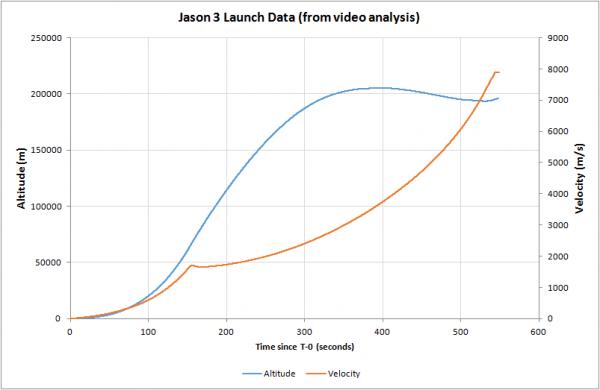 Taking 90t of 2nd stage and payload from the 250t total mass of a Falcon 9, I used 160t as a rubber 1st stage. MECO is at 147 sec so I subtracted 1/147th of this mass for each second of flight, figuring that useful weight was everything that was left. Then calculating KE and PE for useful weight on the Falcon 9 flight profile, I found the point where total energy matched that of Stratolaunch.

This point turned out to be 70 seconds into the flight. Useful weight was 174t, altitude was 10,700m and velocity was 406m/s. So Stratolaunch is about half a Falcon 9 first stage as measured by energy. At roughly the same altitude, Stratolaunch carries half again as much weight at half the speed of a Falcon 9.

Not the answer you're looking for? Browse other questions tagged rockets payload or ask your own question.

12
What went wrong, Falcon 9 1.1 first flight with first stage landing attempt?
13
What is the most widely used first-stage rocket engine in operation today?
18
How will SpaceX achieve landing of the Falcon 9 first stage?
10
How good was the precision of German V2 rockets?
1
What kind of maneuver Falcon9 & Dragon follows after separation
13
How would the Saturn V have differed if the first stage was also LH2/LOX?
17
Has SpaceX re-used a first stage twice yet?
12
Was the R-7 the first two stage rocket of the Soviet Union?
3
Can a first stage be a booster?
3
Testing of a first stage using dummy upper stages?