What is the feasibility of launching a probe to Sedna?

This dwarf planet reaches perihelion in the summer of 2076. At a distance of 76 au, is it feasible to launch a probe that would reach Sedna in time? With an orbital period of over 11,000 years, this may be humanity's (as we know it) only opportunity. Repeated internet searches have failed to reveal any nation or group making plans for this mission yet, but is this because of lack of vision, or is the task itself impossible?

It appears that Neptune may be in a position to help provide a gravity assist around 2056. If at all possible, such a mission should aim for an orbital capture and/or landing.

Besides the scientific goals & boasting rights, such a mission would also serve as an interstellar precursor. Any orbiter/lander, logically, would need to be designed to last as long as we can make it last, centuries if not millenia. Imagine having an interstellar beacon at the edge of our solar system! 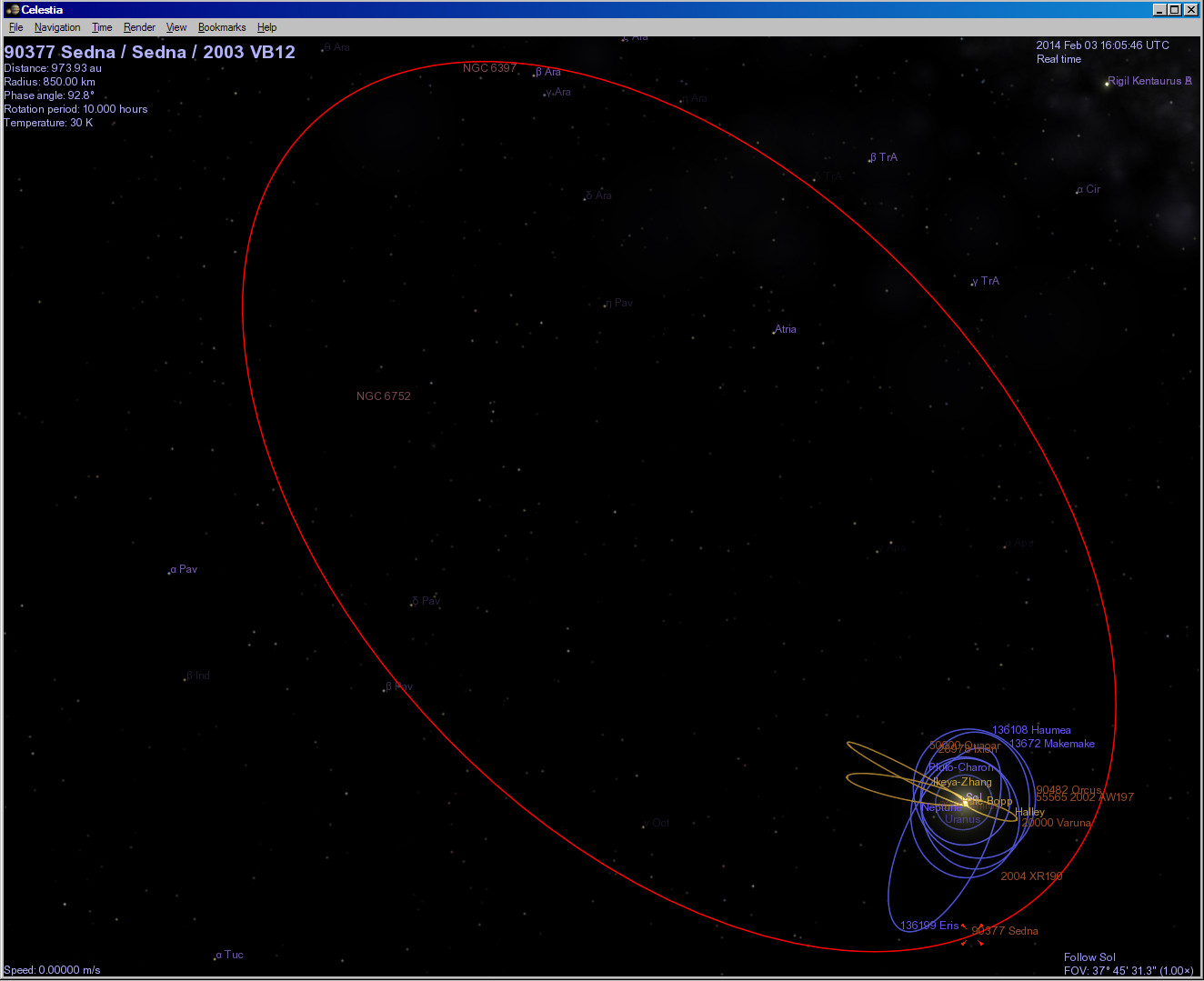 Given that we have practical ion thrusters, it's time to look at them.

The craft is not tanks-dry, either. It has approximately 6 months (180 days) of fuel per design. That's a roughly 20% fuel design, and my estimate on the mass of the thruster itself is 10kg - about 0.01N per kg, and linearly scaling, with about 16x thruster mass in fuel per year. (These numbers are rough, but provide a baseline)

In the inner solar system, solar power is viable for an electric thruster; out past the asteroids, it becomes pretty much non-viable.

Radio-thermal generators, likewise, are measured in kilograms per watt... one of the most efficient was on the voyagers, at around 40W of electricity out per kilogram... to get a reasonable 0.2mm/s^2 acceleration, they become impractical.

Which pushes us into the range of nuclear fission reactors. Which also means large masses - the SNAP-10A was 290kg and 30kW.

We need a multi-ton spacecraft. There is a design for a 100kW Electrical output, ~520kg nuclear reactor. This would be adequate to power 50-some NSTAR units at 91mN each; assuming only 20 such units, and 80kg each per 6 months in reaction mass, and 10kg each, plus a 200kg science payload, we can get a good first order hypothesis. I will assume for now a 5 year plant duration, since the SAFE400 has been in testing for several years, and I cannot find documentation for its fuel use.

However, the actual acceleration would increase over the mission, and the mass of fuel being the largest proportion, we can use the average mass of around 4000kg for figuring overall - nearly doubling the engine-off speed, and cutting the coast time to about 20 years. The remaining issues are fuel for the power plant, which I lack the data to calculate.

A larger fuel mass could be used, increasing duration, but decreasing initial acceleration. A 4 year fuel duration, for example,

This would put a rough mission travel time on the order of 6 years, and about 1/2 of it thrusting outbound, 1/3 coasting, and 1/6 decelerating into orbit.

Unfortunately, the technologies are not all fully proven. By not fully proven, I mean (1) we don't know that they actually will survive a 4-year constant "burn"... tho' we know they will last at least 160 days, and (2) the fission system hasn't been in existence long enough to establish that it will in fact last the 4-10 years needed for a mission

Yes, a first order analysis indicates it is plausible that a mission could be made, and with a flight time of under 10 years.

There are a number of vagaries, however, in the available data. Structural mass is simply estimated; fuel mass may be insufficient for the indicated duration, etc.

Considering that Voyager 1 is already 126 AU from the Sun 36 years since launch, there should be no reason that it would not be possible energetically using a normal launch, small maneuvers, and planetary flybys. Just a Jupiter flyby should be sufficient. Jupiter will also provide the necessary change in inclination.

Designing a probe that is assured to operate for that long would however be quite difficult. (The Voyager spacecraft were not assured to work past Saturn.)

I will try to answer your question.

At every 12 years, Jupiter can be used for a gravity assist. A second gravity assist can, at current position, be performed by a Neptune flyby. All spacecrafts that are now escaping from Sun's gravity, have used a Jupiter gravity assist. This includes the Pioneer 10, Pioneer 11, Voyager 1, Voyager 2 and New Horizons. All 5 spaceships had to travel (or will have to) about 30 years to get to Sedna's current distance.

With current technology, we can send a space probe towards Sedna, similar to New Horizons. We will need to wait for about 30 years to conduct a flyby and see what is there.

Propulsion. A space probe to Sedna can be very similar to New Horizons. It can be launched with an Atlas V rocket and travel with a similar speed. It might be possible to use a solar sail or an ion engine, but nobody has tried this on such a scale. So, I will only talk about classic, chemical engines, that have been used for previous ships.

Sending a probe for a Sedna flyby is probably as difficult as sending New Horizons towards Pluto. If the probe weights the same as New Horizons, the amount of fuel needed will be almost the same. However, if you want to build an orbiter or even a lander, everything is more complicated. Sedna is smaller then Pluto and so it has little gravity. If a spaceship approaches with similar speed to New Horizons (14.5 km/s), there is nothing that can stop it. There are two ways to insert an object on orbit around Sedna:

If we want to touch Sedna's surface, we should better build an impactor, like the one used by Deep Impact probe. The impactor will provide us with images from near the surface. The impact will expose materials below the surface.

Technical challenges. The most important problem is that the radioisotope thermoelectric generator (RTG) has a limited lifetime. The plutonium isotope used has a half life of 87 years, so it should be enough. However, the thermocouples used in an RTG also have a limited lifetime. The Pioneers have lost contact roughly at the same distance where Sedna is. The Voyagers have survived further away in space, but they hardly can power up their antennas. New Horizons is expected to stop functioning at Sedna's orbit. So, our spacecraft will have to use a much larger and more powerful RTG.

Conclusion. With our current technology, we can build a space probe similar to New Horizons. The probe, with the help of a Jupiter gravity assist, will travel 30 years to Sedna and will conduct a flyby. The RTG must be larger then the ones used for previous probes (probably it will carry 50 kg of plutonium). Data from the encounter will need a few years to be downloaded to Earth.

Sending an orbiter or a lander to Sedna is, with current technology, not feasible.

Not the answer you're looking for? Browse other questions tagged trajectory future-missions deep-space gravity-assist sedna or ask your own question.

12
What's the best flightpath to get to Sedna by 2076?
13
Could radiated heat propel space-craft in outer space?
2
Do the proper ephemeri yet exist to calculate trajectories to Sedna?

14
What is the United States' current plan to get back to launching people into space?
16
What probe received the most gravitational assists?
15
What software can be used to determine deep-space trajectories?
5
What is the best approach vector for orbital capture by an outer solar system body?
2
Do the proper ephemeri yet exist to calculate trajectories to Sedna?
12
What's the best flightpath to get to Sedna by 2076?
21
How precise must be the antenna orientation to communicate with a deep space probe?
11
What will happen to Parker Solar Probe in the long term?
7
What is the point of launching EM-1 on DIVH/F9H?
2
Have space probe gone to unplanned destinations?