I'm trying to find the temperature of a CubeSat in orbit at 140km. I'm trying to use the Stefan-Boltzmann law but don't know how to incorporate the energy from sunlight. I'm using this as a check for a code that models temperature of the spacecraft through time and am considering the case where the plate is directly between the Earth and the Sun. 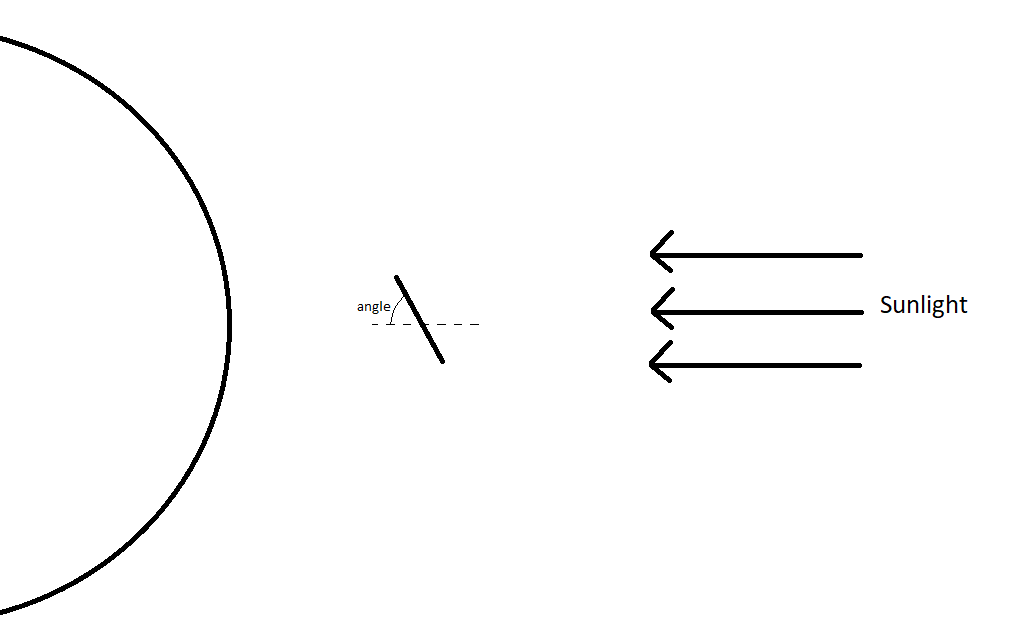 As you want to apply Stefan-Boltzmann, I will assume that you are interested in vacuum heat and radiation dynamics. As some comments have pointed out, at 140 km, interactions with the atmosphere would be very significant or dominant. That doesn't quite look like what you are after though, so I will completely ignore the atmosphere.

For a starting point, let's first also ignore the Earth. In a vacuum, exposed to the Sun, any object will reach an equilibrium where $\Delta W = 0$, that is

For $W_{in}$, that's the solar constant of 1360 W/m², times the cross section area and what portion of the light gets absorbed (for real satellites, you may also want to add a term for the heat produced onboard).

$A_1$, the cross section area, is for the case of planar object, $\cos(\alpha)A$, where $\alpha$ is complementary to the angle in your diagram.

For the radiation, we can apply Stefan-Boltzmann directly

But this is still just an object floating in space. The next thing to factor in is the night side of the Earth.

For an object with large thermal mass, the temperature will stay approximately the same over the time it takes to complete an orbit. For the simplest case of an object orbiting in the ecliptic plane, the shadow angle of the earth can be expressed as:

Where $r$ is the orbital radius and $r_e$ the radius of the Earth. For large orbits, you may want to take into account some shadow cone effects due to the physical size of the Sun, but at that point the Earth's shadow isn't really relevant any more.

You could make use of this immediately, and calculate an "average" adjusted solar constant, but there's still one important factor we have not yet taken into account:

The Earth both reflects and emits radiation, in fact, exactly as much as it receives, because it too is in a thermal equilibrium. As a first order approximation, the Earth receives radiation in a circular cross section, and scatters it in a sphere, the area ratio being 1 : 4 (in practice, since the Earth does not have perfect heat transport, the number will be somewhere between $\pi$ and 4 for the equator) For a low Earth orbit, this means around 300 W/m². You can scale this by multiplying by how much the radiation spreads, a factor of $\frac{r^2}{r_e^2}$

When adjusting for this, you have a usable model, at least for the case of large thermal mass. A piece of aluminium foil doesn't, so we have to go one step further.

For a small thermal mass, it will quickly reach a local thermal equilibrium, so it will have a day-side temperature and a night side temperature. Again, there would be some twilight effects and delay in practice, but at that point we would require numerical simulations. The temperature variation would in any case be between the two extreme temperatures and only dampen them somewhat.

The Earth does not directly absorb all the radiation that hits it. We have to subtract what's reflected throught eh bond albedo, which leaves about 2/3 absorbed. It's also a little colder at night most places, so a surface flux of 200 W/m² on the night side should be okay for calculating that equilibrium.

On the day side, we will still have this have this flux on top of the Sun light, and we will also have reflected light from the Earth, by area ratio of diffuse reflection about half of the bond albedo portion, or another 200 W/m²

Not the answer you're looking for? Browse other questions tagged orbital-mechanics artificial-satellite cubesat temperature or ask your own question.

12
Temperature of a satellite orbiting in low Earth orbit
2
ULA's plan for LH2/LOX 2nd stage that can maintain propellant for an extended period of time?