After asking Have astronauts in space suits ever taken selfies? If so, how? I started to think about the photo below, and especially the cropped and rotated section that I found in the Wikipedia article for Opposition Surge. 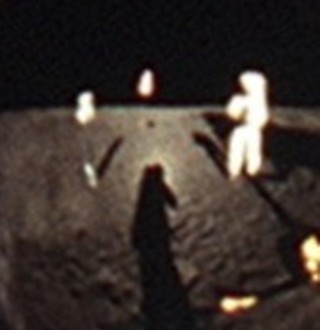 I always get confused by this pair of images. The sun is behind and to the side of Buzz Aldrin, who is inside the large spacesuit in the center of the large image below. That's why Aldrin's shadow is cast forward obliquely towards the camera.

I have wondered for a while if this is just a fortuitous thing, an unintentional "selfie", or if it was planned or at least anticipated that an astronaut taking a photograph of another astronaut facing them at medium to close range would also have an image of themselves reflected in the visor, thereby imaging both astronauts on the Moon simultaneously.

below: NASA/Apollo photo AS11-40-5903 from here (larger size available there and at the bottom of this page. 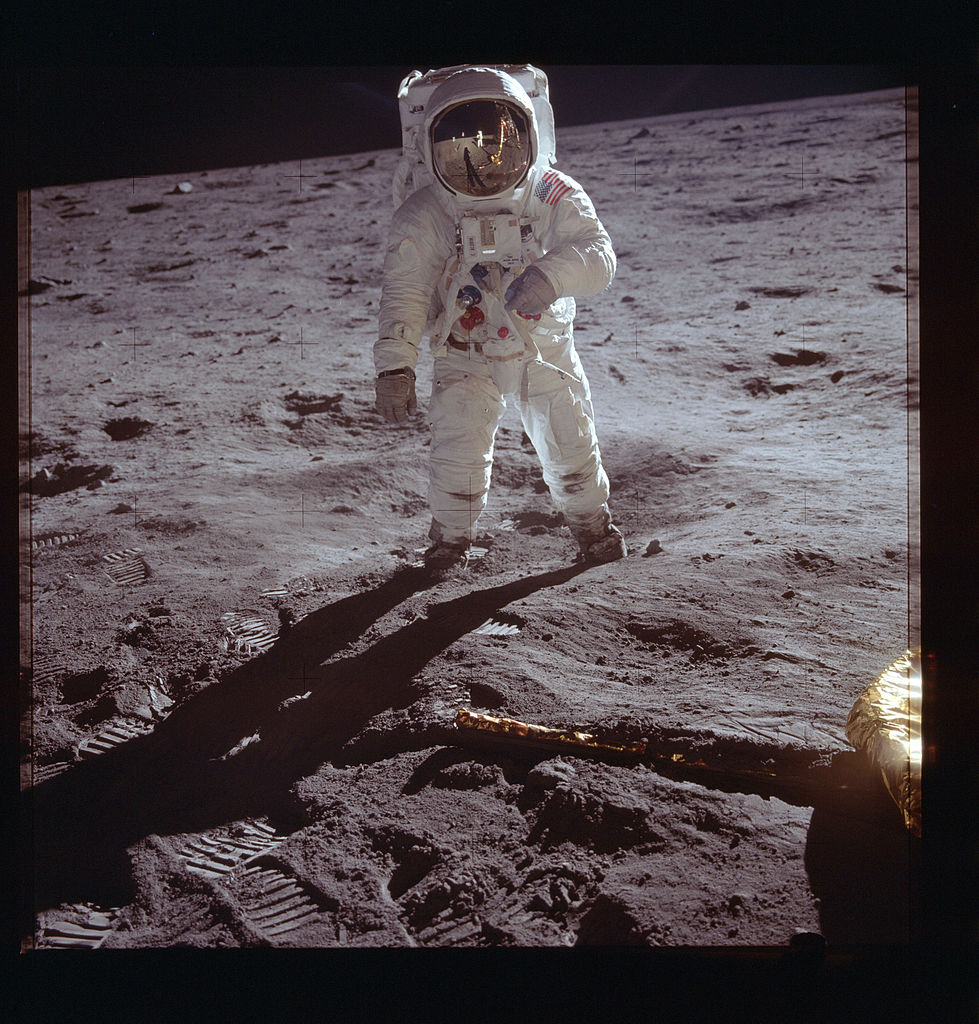 The Apollo astronauts underwent intensive training in preparation for their Moon explorations. Over the several years prior to the Moon missions, scientific and photographic training was provided. Astronauts were encouraged to take training cameras on trips to become more familiar with the camera operation and to enhance their photographic technique.

Tutorials were provided to the crews on the equipment, its operation, as well as on the scientific purposes. The crews visited geologic sites in Nevada, Arizona, and Hawaii, frequently simulating their lunar traverse, completely outfitted with sample bags, checklists, simulated backpacks, lunar rock hammer, core-sampling equipment, and typically using Hasselblad EL cameras similar to those they would use on the Moon.

As the use of the camera was mostly automated, the most crucial training was in pointing the camera which was attached to their chest control packs for the suit's environmental control system. The astronaut would point his body in order to aim the cameras. Films taken during the practice exercises were processed and returned to the crewmen who would study the results.

NASA named Richard Underwood its first chief of photography. “He was a visionary who advocated for experimenting with cameras during the Mercury and Gemini programs,” notes Wired. “Later, he taught Apollo astronauts how to frame shots, set exposures, and calculate focus, and encouraged them to tote their Hasselblads on personal trips to hone their skills. ‘Your key to immortality,’ he told them, ‘is in the quality of your photographs and nothing else.’”

See also these questions about the 500 mm lens and its use for panoramas. 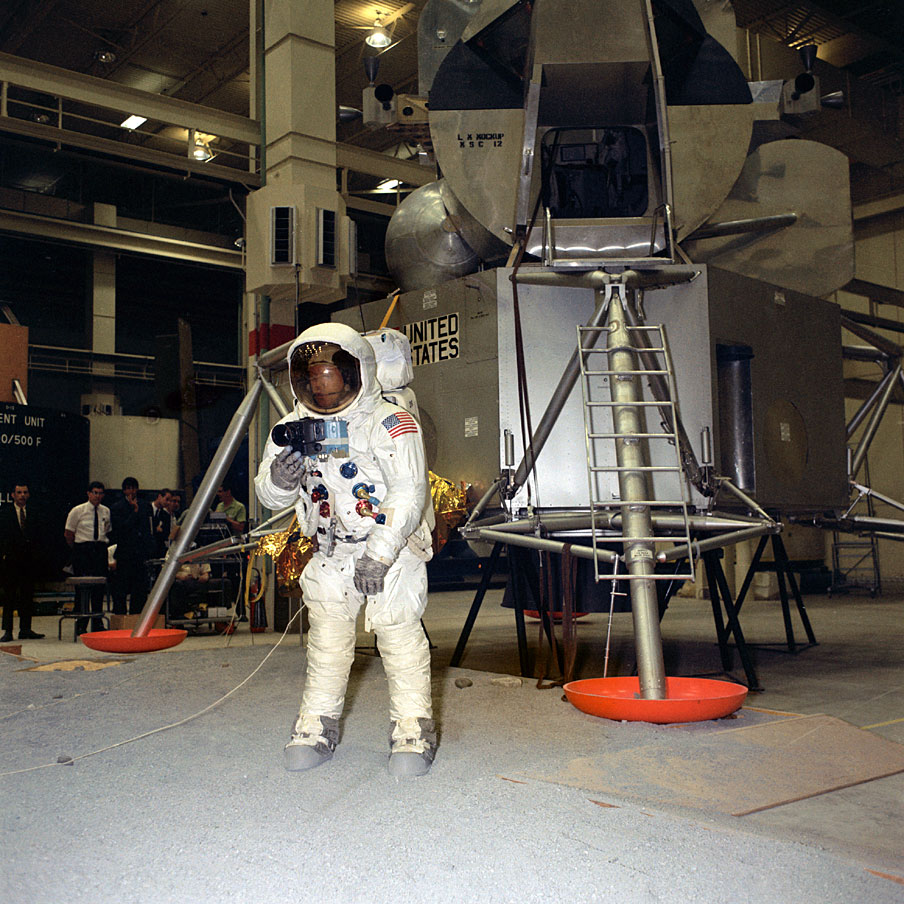 A photo of Neil Armstrong wearing a suit with attached camera during a training from this page. 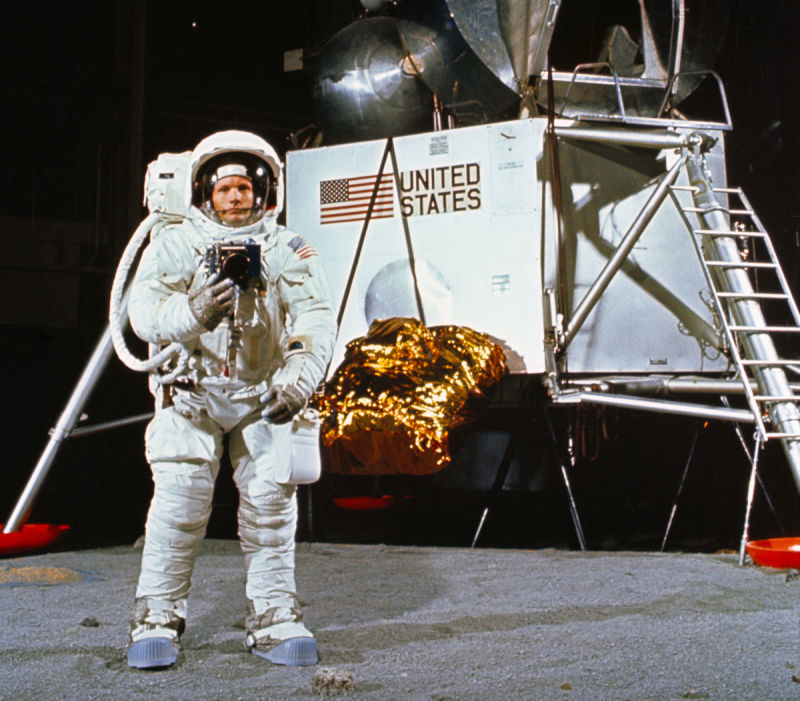 Neil Armstrong, standing in front of a Lunar Module mock-up and holding a camera during a simulation in Houston on April 22, 1969. Source

It is unlikely that astronauts of Apollo 11 had practiced photographing each other. According to Neil Armstrong’s biography “The First Man” they did not think of taking pictures of each other, it just didn’t cross their minds. Both were taking pictures and held camera according to schedule laid out in the flight plan, and that seemingly included only rocks and landscapes.

As a side note, there is not a single portrait of the first man on the moon, on the moon .... because “no one thought about it” - not during the months of planning nor when the guys were actually on the moon. Different times.

Apollo astronauts rehearsed everything they planned to do on a mission, including taking photographs, in their training before a mission. They also rehearsed hundreds or even thousands of "what if?" scenarios that they hoped they would never need to put into practice during an actual mission.

Not the answer you're looking for? Browse other questions tagged apollo-program photography apollo-11 or ask your own question.

26
Why is the Apollo LEM ladder so far from the ground?
19
Usage of Apollo Lunar Surface Hasselblad Camera with 500 mm lens?
14
Were stereoscopic pictures taken during the Apollo missions?
13
Have astronauts in space suits ever taken selfies? If so, how?
6
Were panoramic images taken during Apollo 15 planned and trained before on Earth?
7
How does the thin gold film in the glass of spacesuit helmets block thermal IR but transmit visible? What's the property?
2
When was stereoscopic photography first used intentionally on solar system body?
2
What spacesuits did the Apollo astronauts wear on Earth in their training for the Moon?