Why are images from DSCOVR EPIC unavailable for certain dates?

I am in love with the images available at https://epic.gsfc.nasa.gov/ taken from the DSCOVR satellite. I am curious though as to why some dates are unavailable to select.

The calendar date picker tool has dates that are unavailable to select. For example 2019 February on the 5th and 19th.

Is it because no images were taken on those dates, or none scheduled, or is there some other reason why they wouldn't be available? 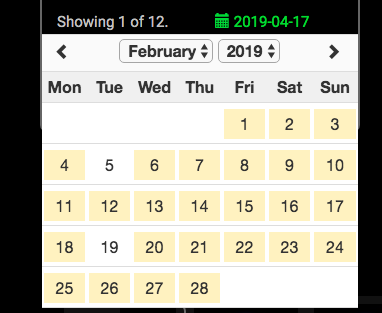 I can't say for sure, I but would guess that it's due to maneuvers. There are other satellites in Libration Point Orbits that maneuver on the 2-3 week time frame. (They do so no matter what, it's not on an as-needed basis) Also there are a couple of factors associated with maneuvers that can preclude the ability to 'do science' on the spacecraft:

Most likely it's just the first one, but these are all things I've heard bandied about with regard to other satellites.

For the irregular outages, those could be other satellite maintenance issues, such as momentum unloads, or as you speculated scheduling conflicts, or even hardware issues.

It's not lunar interference, they take images throughout any transits:

Actually as part of my application Blueturn (http://app.blueturn.earth) which makes interpolated video feed out of EPIC images, I have been following the EPIC feed a lot and I observed that except the memorable Moon transit of July 5th 2016, we don't have other images of the Moon photobombing the Earth.

There is a reason for this; the presence of the Moon in the images poses a problem in the extraction of the RGB images published on the website. These images are made up out of 3 separate Red, Green and Blue channels (The P of EPIC is for Polychromatic camera), whose respective shots are taken a few minutes apart. Presumably at least part of this delay is from the movement of the two filter wheels between each of the ten wavelength exposures described below. During this time, there is significant movement of the Moon's position relative to the Earth, making it difficult to align the colors. Besides that, the presence of the Moon within the frame also interferes with the edge location algorithm.

On 7/5/16 they did Moon-Earth images, but on this day Blue was only a couple of seconds away from Green, so that worked quite well.

My sources are from a few conversations I had with the NASA team behind DSCOVR operations and EPIC images. Sorry I don't have a link to support my explanations.

A little bit more about the EPIC camera:

EPIC is a 10-channel spectroradiometer that uses a Cassegrain type telescope, built by SSG Inc., comprised two filter wheels with six positions each (the open hole plus five spectral filters). It is a reflecting Ritchey-Chretien design with an aperture diameter of 30.5 cm, f 9.38, a FOV of 0.61° and an angular sampling resolution of 1.07 arcsec. (Once at L1, Earth varies from 0.45° to 0.53° full width.)

It images the irradiance from the sunlit face of Earth on a 2048x2048 pixel CCD (charge-coupled device) in 10 narrowband channels: 317, 325, 340, 388, 443, 552, 680, 688, 764 and 779 nm. The wavelength spans ultraviolet and near infrared, and the exposure time for each channel is about 40 ms. This combination of UV and visible channels is unique to DSCOVR, and they were selected, in part,to match with other satellite imaging instruments so data products can be directly compared. These comparisons will validate both calibration and data reduction algorithms.

To increase the downlink cadence of retrieved 10-channel image sets, the resolution will be averaged on board to 1024x1024 pixels resulting in spatial sampling at 17 km from pixel to pixel with a resolvable size of 25 km. The time cadence will be no faster than 10 spectral band images every hour.

Not the answer you're looking for? Browse other questions tagged nasa photography earth-observation dscovr noaa or ask your own question.

6
What is the timeliness of DSCOVR-EPIC image acquisition and public release?
2
Why does DSCOVR's camera EPIC see at least 13 sunrises and sunsets per day?
1
How could the recently explained “glints” seen by DSCOVR appear so compact considering the finite size of the sun?
6
Why does the NOAA require a permit to be issued to stream images of the earth?
5
How was DSCOVR “fixed” so that sufficiently dynamic attitude determination is gotten from star cameras?
3
Why Are EPIC/DSCOVR Images delayed for a day?