In a question about communicating with Voyager, an answer asserts:

[70 meter dish antennas deployed in space] just isn't done, and it probably won't be, since optical communication is definitely the way to go in the near future. We've already had demonstrations from Earth to the Moon, and there are no known roadblocks to extending optical communications to deep space. Since the wavelength of light (about 1 micron) is so much smaller than the wavelengths used in deep space (centimeters, perhaps millimeters in the future) the "dish" shrinks from a huge steel monstrosity to the mirror of an optical telescope tens of centimeters in diameter. This can be managed quite nicely on a deep space probe.

In more detail, considering also path loss and technological considerations in the construction of the receivers and transmitters, just what is it that makes optical communication favorable?

Reference systems for a spacecraft downlink to Earth will be loosely based on Voyager for X-band and NASA's DSOC (Deep Space Optical Communications) for optical.

Using the longer optical wavelength of 1550 nm instead of 850nm lets you have a nice optical fiber communications single-mode laser diode efficiently coupled to a single mode fiber, then use EDFAs (erbium-doped fiber amplifiers) to optically amplify the signal to several Watts while keeping it within a single mode fiber. This is necessary to take advantage of the diffraction limited optics of the telescope to produce a narrow transmit beam.

I used 0.5 meters for the spacecraft's optical "dish" because that's the diameter of an actual telescope mirror that is on each of the voyagers now.

So right off the bat we see that by shrinking the wavelength by 20,000 times more than offsets smaller diameters of the "dishes".

A really surprising thing to me is that the number of photons ($E = h \nu$) is almost the same! At a handful of GHz we usually don't talk about photon rate because they are very difficult to count and even at liquid helium temperature the background photon rate is quite high.

But at optical frequencies we can certainly count individual photons! So instead of comparing the received power 1.5E-18 W to $k_B T$ (about 1.4E-22W at 10K) we can just go directly to photon counting statistics. Even at room temperature, the rate of thermally produced optical photons is very low. We are no longer in the Rayleigh-Jeans regime, discussed further here.

I will leave further discussion of photon counting to a future question and answer session. Instead of photomultiplier tubes which work well for visible and just barely infrared (say 800 nm) what is in vogue now is superconducting nanowire position-sensitive photon detectors for the downlink receivers at least. See the images below for example (demonstrated by LADEE's Lunar Laser Communication Demonstration.

According to Spaceflight 101's Lunar Laser Communication Demonstration and ESA's LADEE efficiencies are in the range of 1 bit per detected photon. It relies on precision timing of the photons and a bit more math than I'd like to learn today to show this.

So instead, I'll just quote @MarkAddler:

No, you don't need "at least some photons per data bit". 13 bits per photon has been demonstrated with laser communications.

You should read the full answer for context and to view the sources cited.

That's a (potential) increase in received data rate of 1,000 times!

Screenshots from Overview and Status of the Lunar Laser Communications Demonstration: 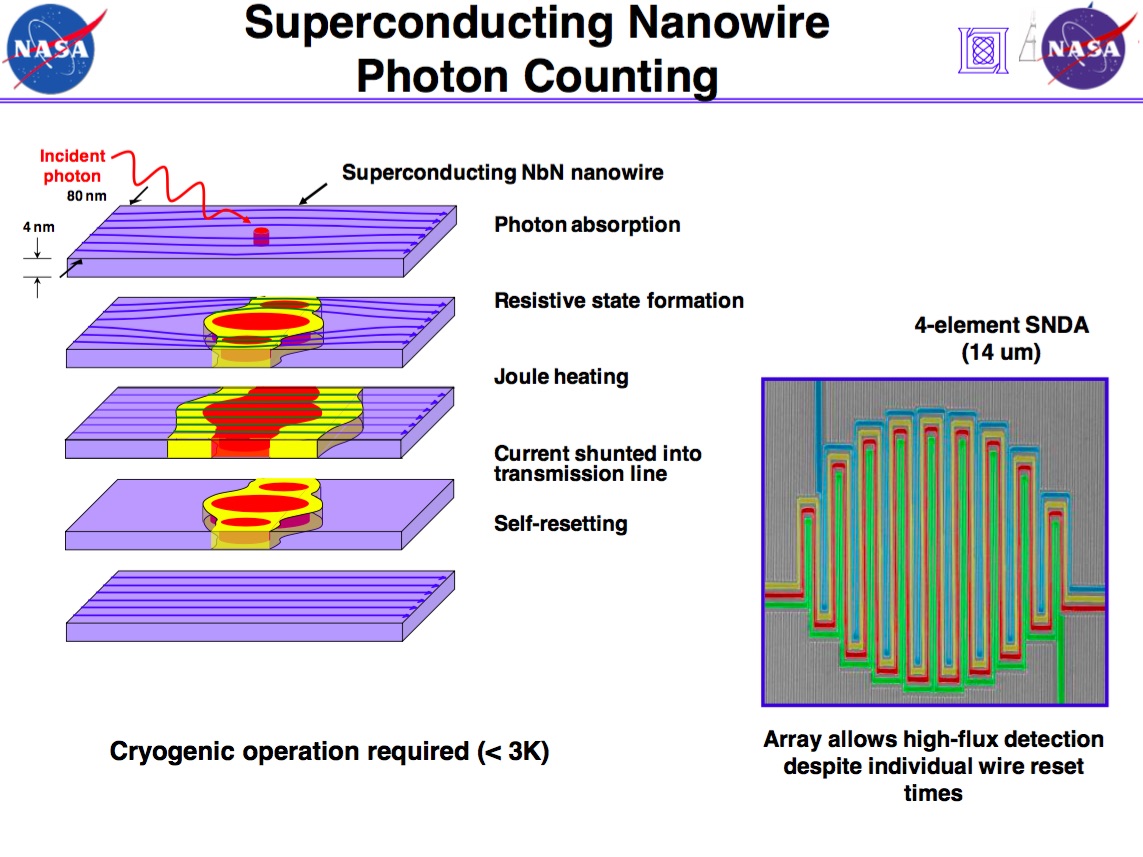 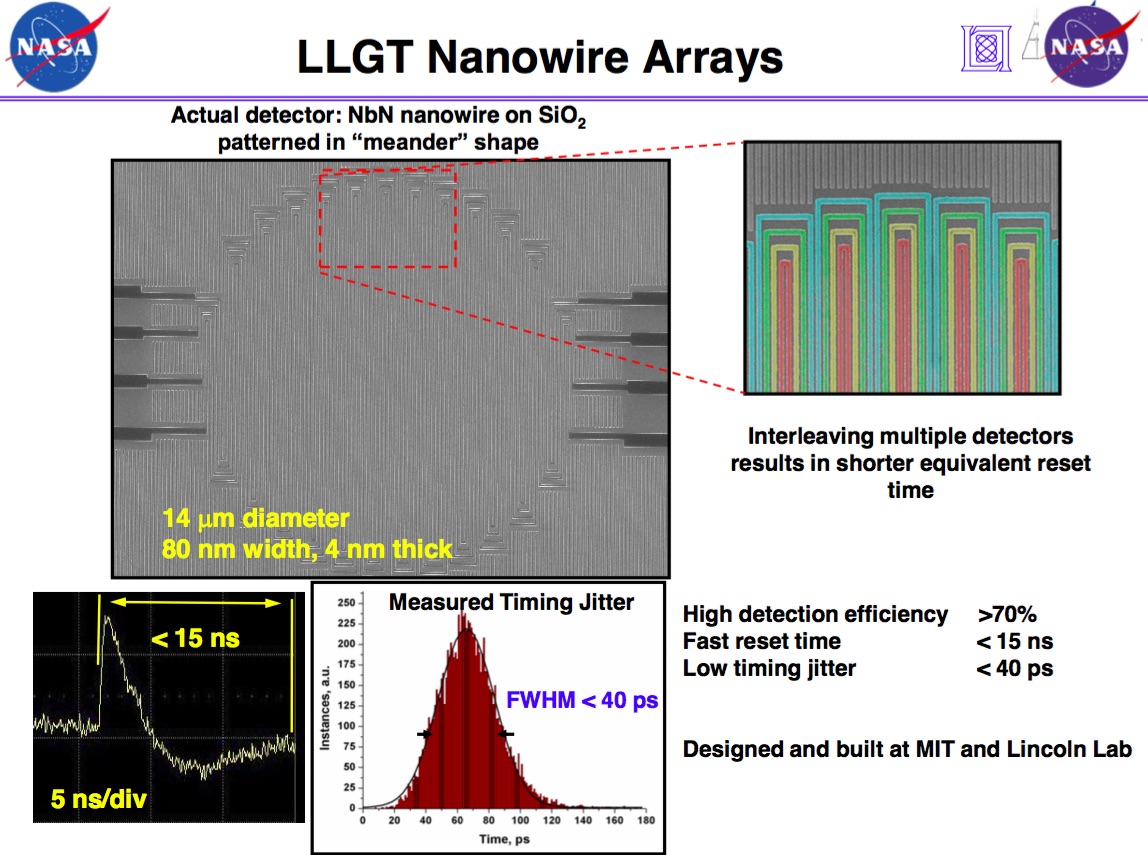 X-band microwaves are about 3cm in wavelength. Light’s wavelength is roughly 1 micron (IR) or smaller; a factor of 30,000 smaller. That means that it’s much easier to create a narrow beam back from a spacecraft, concentrating more power onto the area of the receiver.

For example, to do as well as a 10m Xband transmitter, you need (in theory) a 0.3 mm transmitter (!). That Xband transmitter might be sending to a 30m receiver, and those are hard to build in optical. So you could narrow the beam by another of 30, to get the total power in a 1m telescope, and still be only using a 1cm transmitting telescope.

Put a bigger telescope at each end, and your total received power starts to go up a lot.

Not the answer you're looking for? Browse other questions tagged communication or ask your own question.

19
Why not send Voyager 3 and 4 following up the paths taken by Voyager 1 and 2 to re-transmit signals of later as they fly away from Earth?
18
What's the largest aperture telescope sent beyond the Earth-Moon system?
11
Why doesn't thermal radio emission from a DSN "hot dish" completely swamp the benefits of a cold LNA?
13
How to calculate data rate of Voyager 1?
5
Is there a way (working or in development) to track satellites in lunar orbit like we track objects in Earth Orbit?
9
Is it possible to extend high speed data transmission with lasers to the distance Earth to Mars?
4
What would be merits of placing space telescope after the asteroid belt or closer to the Kupier belt?
5
Does the Ingenuity helicopter on Mars have a radio call sign?
5
Why does NASA use higher frequencies even though they have worse Free Space Path Loss (FSPL)?
7
Will there be a command moratorium for Mars spacecraft again in 2021?
See more linked questions