What was Apollo 13's "Little Jolt" after MECO?

Disclaimer: This is a question about the 1995 film Apollo 13; I know Hollywood should always be taken with a moon-sized grain of salt, so the question should read as both "Is this true" and "What was going on?"

During the Saturn V launch (about 30 min into the movie), there is a particular sequence that bothers me:

Just before main engine cutoff (MECO), Jim Lovell (Tom Hanks), the only crew member that has already flown an Apollo mission, warns his crewmates to "Get ready for a little jolt, fellas".

Right after that, we see the crew thrown violently forward against their seat restraints, only to be pushed back into their seats after a few seconds (again, very violently).

I understand the second push will happen after second stage ignition (maybe ullage), but the first push looks like the whole spaceship was suddenly stopped mid-air (not much air at 70Km, but still).

So, was this some Hollywood artistic license or did the Apollo crews experience such violent jolts during launch? If so, what was stopping this ~750-ton vehicle (launch mass minus first stage fuel)?

The film gets this mostly right.

Merely taking the thrust, and, therefore, the acceleration of the rocket down to zero wouldn't throw the astronauts forward; there are a couple of other effects at work.

The first is air resistance; 1st-stage cutoff happens at about 42 mi (68 km) altitude, where there's still some air; this will decelerate the vehicle but not the crew, yielding a very small forward crew movement relative to the capsule. This doesn't explain the violent jolt, however.

The main thing is that, immediately prior to 1st-stage MECO, the structure of the Saturn V is compressed under 31,000 kN (about 7 million pounds-force) of thrust. The rocket actually gets a little bit shorter, like a compressed spring. When that force is removed as the engines shut down, the structure rebounds, abruptly stretching back out past its "natural" full length, then recoiling and shortening again in a decaying oscillation (just imagine the "boing!" that goes with that!); that pushes both the capsule and the astronauts within forward. The astronauts aren't rigidly attached to the capsule, so when the structure reaches its full extension and begins to recoil, they are effectively flung forward into their straps.

The crew being thrown back into their seats just as violently with the second stage ignition is a little overdone, or mistakenly attributed to the second stage instead of the recoil effect. As @motosubatsu's graph shows, the thrust doesn't come up instantly, and hits only about 0.8g when the engines come up to full power.

A similar effect occurred at staging on the Gemini flights as well, though obviously on the smaller scale of the Titan booster.

Many of the Apollo astronaut biographies allude to the violence of this jolt. The technical debriefings usually downplay it a little.

Jim Lovell had experienced the jolt of Saturn V staging previously on his Apollo 8 flight, so the "get ready for a little jolt" line would be plausible, but nothing like that appears in the transcript of the command module voice recorder at the time of staging:

And once safely in Earth orbit, there's this exchange (h/t to Tristan for finding this):

Frank Borman, Apollo 8 technical debriefing: "The S-1C/S-II separation was nominal; the crew was thrown forward in their seat, as you would expect in a staging."

According to Jeffrey Kluger's book "Apollo 8", Bill Anders had his hand in front of him during staging, and banged the metal wrist ring of his suit off his helmet hard enough to leave a visible scratch; Kluger attributes this to the acceleration of the S-II but I think it was more likely part of the compression rebound. I seem to recall that Anders on Apollo 8 wasn't the only case of "wrist ring rash" at S-IC staging, but can't find a reference.

Tom Stafford, Apollo 10 technical debriefing: "Now at this time [MECO], we had expected a negative g, and we thought it would just be one pulse, but what we had was a tremendous structural pogo oscillation. It was approximately 4 cycles and we were slammed forward, back, forward, back, forward, and back; the instruments, to me, were kind of blurred."

Michael Collins, in his book "Carrying the Fire":

Staging, it is called, and it's always a bit of a shock, as one set of engines shuts down and another five spring into action in their place. We are jerked forward against our straps, then lowered gently again as the second stage begins its journey.

Gene Cernan, in "The Last Man on the Moon", reports on both his Saturn V flights, first Apollo 10:

We had anticipated the same sort of staging jolt as on our Gemini flights, but this shutdown was unusually violent and we were thrown back and forth against our straps as hard as if we were hitting a wall. The tailing fireball swallowed us whole. John Young later likened the impact to a great train wreck.

Crewmate Stafford also uses the "train wreck" comparison in his book, We Have Capture.

At two minutes and forty seconds, the first-stage rockets burned out and we were gobbled up by a fireball the likes of which I had never seen, a maelstrom of flame that toyed with my certain knowledge that we were not burning up. We're not. This is normal. The straps holding us to our couches strained as we were slung forward and back, side to side, again and again.

We were pressed down in our couches, feeling heavy, when the first stage engines shut down. It felt like we’d slammed on the brakes of a speeding sports car. Jim and I instinctively threw up our arms, fighting the feeling that we would break through our restraining harnesses and smash right through the instrument panel. Dave [Scott], on the other hand, hardly moved. After we finished flailing around, I looked over at him, took a deep breath and asked, “Dave, what is happening?” Dave gave us the confident smile of someone who had flown a Saturn V before. “Oh, that’s normal. No big deal. I just forgot to tell you about it.”

“Man, you aren’t kidding,” I replied, with a raised eyebrow. It had scared the hell out of me.

John Young: "At inboard cut-off, we got this minor damped unloading [i.e. a smaller rebound when the center engine turned off, reducing the thrust load by 20%] and when the outboard engines cut-off, we got at least four times as much."

Ken Mattingly: "I was well braced for it. I'm sure glad I was. That really gets your attention!"

Young: "I mean to tell you it does. I was holding on to the bottom of the T-handle [abort control], at that point, because I sure didn't want to do the wrong thing [i.e. accidentally abort the flight]."

Charlie Duke: "It's a good idea to brace yourself."

If so, what was stopping this ~750Ton vehicle (launch mass minus first stage fuel)?

I can't speak to the severity of the "jolt" but there would certainly be one at MECO - not because the vehicle had "stopped" but because it had stopped accelerating upwards (for want of a better word).

This graph is from Apollo 8 but should be close enough for our purposes: 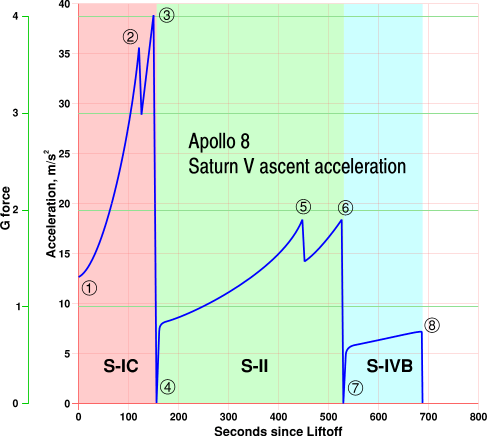 So at pt 3 on the graph when the S-IC cuts off before S-II ignition the spacecraft no longer has any upward acceleration but is still experiencing downward acceleration in the form of our old friend gravity (at ~70km that's going to be around 9.59m/s2).

The very sudden (essentially instantaneous) removal of that level of acceleration is going to be a little jarring to experience - whether it would throw them forward into the belts as the movie shows.. well I'm not convinced it would do quite that (my physics isn't good enough to work out whether that would happen or not) but it would make sense as being the only real way to show the violence of the motion on film.

Not the answer you're looking for? Browse other questions tagged launch apollo-program apollo-13 or ask your own question.

3
What are the G-forces of Soyuz 3rd stage engine cutoff
-1
Can I do "car surfing" on empty space?