Are there any possible methods for keeping surface water on mars?

I've been reading this wikipedia article on terraforming mars. One of the major issues with terraforming mars is essential molecules and elements escaping the planet. There have been several proposed solutions to stopping solar wind degradation that seem feasible, however it still leaves the possibility of molecules escape velocity being low enough to leave the planet easily, especially if the planet were to be heated up.

According to this graph, it looks like water vapor would easily escape mars's atmosphere: 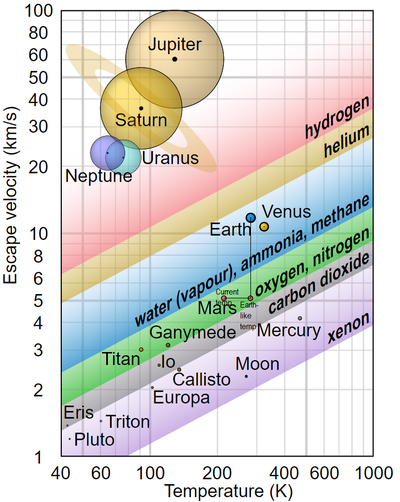 What could we conceivably do to keep liquid water exposed on the surface of Mars when any evaporation could leak large amounts of water from the planet?

The short answer is that ruling out world-building thought experiments to increase mars' escape velocity; nothing can be done to prevent water vapor from escaping which is precisely why it has so little water compared to Earth.

With that said, Mars' water escapes on astronomical timescales while the goal of any type of terraforming activities would be to liquify mars' water on human timescales. Assuming that you could heat up the planet enough to have meaningful quantities of atmospheric water vapor, it would not escape at a rate sufficient to interfere with those efforts and would only become a problem thousands if not millions of years in the future.

Not the answer you're looking for? Browse other questions tagged mars water terraforming escape-velocity or ask your own question.

2
How is Martian water lost to space?
0
How will Mars terraforming missions really work, how do pioneers like SpaceX plan on conquering Mars?

8
Why are Martian rovers still looking for water?
4
Water needs for a manned journey to Mars
16
How feasible would it be to move a Kuiper Belt object (a good sized one) into an orbit around Mars?
23
Is there any economical way to move the water from the Martian poles to the people?
4
What are the technologies that can identify, validate, and quantify water-rich locations on Mars?
5
Is there any life from Earth that can live on Mars?
8
Are there methods of lightning detection on Mars?
1
Does the polygonal pattern on the floor of this "crater" on Mars mean that there's water ice below its surface?