Have there been any spacecraft with an ecliptic Earth orbit?

Have any spacecraft (manned or unmanned) orbited the Earth in the same plane as the Sun?

(Please read the question carefully. It is not an orbit centered around the Sun, nor an equatorial orbit.)

This is an interesting question!

tl;dr: I don't know about artificially maintained orbits, but for uncontrolled orbits Earth's strong oblateness and the Moon's gravitational perturbations will not allow for an orbit parallel to the ecliptic to remain that way.

We're looking for an Earth orbit with an inclination of 23 degrees, and a ascending node which either precesses naturally or is artificially precessed with a period of one year, so that the orbital plane approximately coincides with either the Earth's orbital plane or the official ecliptic (only a difference of 0.00005° at the moment).

I first though of geosynchronous junk and objects in a graveyard orbit. I know that without station-keeping those objects will drift in inclination away from geostationary, but will they eventually reach the plane of the ecliptic?

Wikipedia's Geostationary orbit; Orbital stability links to Anderson 2005, 66th International Astronautical Congress, paper IAC-15,A6,7,3,x27478, Operational Considerations of GEO Debris Synchronization Dynamics which explains that perturbations of both The Sun and The Moon (luni-solar perturbations) will cause the orbital plane to slowly oscillate between some limits in inclination, with the appropriate oscillation or monotonic advancement in the ascending node.

The plot below cuts off at 20 degrees but I think it's clear that orbits can peak at 23 degrees as well.

However, they don't stay there very long, and will turn around and head back to lower inclination before repeating the cycle.

The periods in both cases are around 53 years, according to the paper.

This is for orbits near GEO altitude and slightly elliptical but close to circular. If you are closer to Earth, or closer to the Moon, behavior will be dominated by other effects. 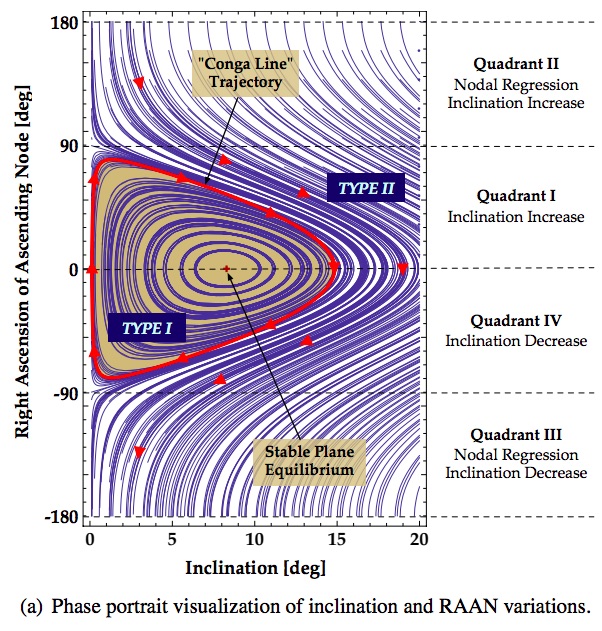 If you get out close to the Earth's Hill sphere (around 1.5 million kilometers) the effects of the Sun could dominate that of the Moon and would certainly dominate Earth's oblateness, and you might be able to have a fairly stable Earth orbit that stays close to the ecliptic.

These are heliocentric orbits that are loosely tethered by Earth in a 1:1 resonance. If the Earth disappeared, the orbit would continue nicely around the Sun with only a small bump in eccentricity.

What Else (for uncontrolled orbits)?

Equations 1 and 2 in the linked paper Anderson 2005 can be applied to other orbits. One could try to scan a much larger range of orbit sizes to see if there is something that stays close to inclination of 23 degrees and where the nodes precess at $2\pi$/year.

Not the answer you're looking for? Browse other questions tagged orbit earth ecliptic-plane or ask your own question.

27
Why is the ribbon of decommissioned geosynchronous satellites skewed?
8
How do stable equilibrium points work in GEO? If all geosynchronous spacecraft suddenly lost stationkeeping, would most “fall into” one or the other?

8
Are sun synchronous orbits possible for any place on Earth?
3
Why does a spacecraft have angular velocity relative to Earth?
4
What attitude have past and modern manned spacecraft maintain(ed) relative to Earth?
7
Have any humans orbited the Earth in anything other than a prograde orbit?
7
Do satellites in orbit undergo translational motion or rotational motion, when initially they are not given any additional spin?
18
How does a Spacecraft change its orbit?
5
Apollo PTC roll orientation and communication with earth
18
If the Earth spun clockwise, how would that affect Space Exploration?
1
Does the Earth's orbiting the Sun influence spacecraft in Earth's orbit?