We all know the 2 stages LM design used by Grumman was intended to discard the mass of the landing gear (+ other components) at the moment of launching off the Moon surface to reach back the Service module. But was it really necessarily for the LM to have two stages? The reason I wonder is that, when Armstrong landed, there was fuel left for about 25 seconds - however, this was actually 25 s before aborting the landing, not before running out of fuel. After these 25 seconds of burning fuel, the complete LM still had enough fuel to ascend with both of its stages right back to the Service module. In other words, the LM was designed to be able to take off from the Moon surface with BOTH stages, even right after touching the surface, in case something would have gone wrong. Then, why did it use two stages? It surely added complexity, weight and a second engine.

After these 25 second would have ended, the LM still had enough fuel to ascend with both of its stages right back to the Service module. In other words, the LM was designed to be able to take off from the Moon surface with BOTH stages, even right after touching the surface, in case something would have gone wrong. Then, why using two stages which surely added complexity, weight and a second engine?

Your assumption is not correct. Aborting from the "bingo" (low fuel) call would have required the ascent stage to be used. The stages can be separated, and the ascent engine fired, while in flight; this was demonstrated on Apollo 9 and Apollo 10.

The ascent from lunar surface to rendezvous orbit took about 7 minutes on the ascent stage; there was nowhere near enough fuel in the descent stage to do that.

Early conceptual designs suggested that two stages would save weight. Another issue came up that made a single-stage lander unreliable.

Pressurizing the fuel and oxidizer tanks of the lunar module was a considerable engineering challenge. Because of the temperature changes that happen during launch and Earth orbit, the tanks were kept unpressurized until right before they were needed. At that time, the astronauts would fire some explosive valves (i.e. you can open them but never close them again) which would release a small amount of supercritical helium to pressurize the tanks.

Development and testing of the LM pressurization system took 6 years and had a lot of problems. The fuel froze, so they added a heat exchanger. A test article exploded, so they had to change the alloy used in the heat exchanger. The pressure regulator cracked. You were supposed to be able to raise or lower the thrust of the descent engine; the pressurization system wasn't compatible with that, so there was another re-design. Another heat exchanger was added. The descent engine shut down prematurely on Apollo 5. It was under-pressured on Apollo 9. When Apollo 11 dumped their excess descent fuel, the fuel lines froze and over-pressurized.

Suffice to say, once you've popped the valves on the LM pressurization system, you have a few hours to use the engine before it becomes unreliable. This was enough time to land on the moon, but not reliable enough to last several days on the moon. A one-stage craft is just too risky. Instead, the ascent stage had its own fuel and pressurization system. (Apollo 13 took the risk of reusing the descent engine, and was lucky.)

Update: The existance of time limits on pressurization of the LM propulsion systems is confirmed by the Apollo Operations Handbook: Lunar Module vol. 1, section 2.8.6:

The Soviets designed a manned lunar lander, the LK. To save weight, it would have had a single engine for descent and ascent. However, it still would have left some parts behind on the moon. 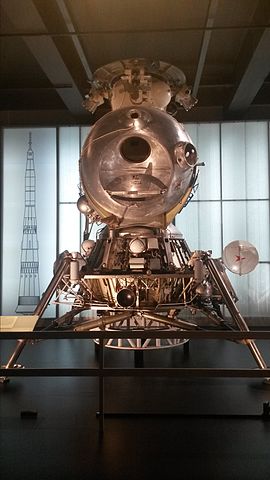 You all seem to have far greater scientific background than I, so please forgive my input if it's too basic. My father was one of the people responsible for the electrical systems (life support), and from what I remember him telling me the reason for the two stage system really came down to two things: minimizing weight on ascension (meaning less fuel was needed) and the fact that there were just too many uncertainties about what they would find out about the moons surface once they got there. They needed to account for excessive sinking/tilt whatever. The best way to overcome this was to bring your own launch platform with you that could compensate for this. Finally it was the simple fact that that whole landing system was not needed after liftoff. Jettisoning almost half the mass of the ship gave them the extra room for ascent and rondevius. As a personal observation I would wonder if the top of the ship would have had the integrity to survive liftoff with the gear still attached. Those walls were paper thin.

28
Could the lunar module have moved to a different spot?
12
Did the Apollo lunar module descent stage have a role as a sort of service module?
17
How was reserve fuel calculated for the Apollo missions?
8
Could the Apollo LM abort mode be engaged after touchdown? What would have happened if it was?

9
Where is the first Lunar soil sample currently located?
8
Could the Apollo LM abort mode be engaged after touchdown? What would have happened if it was?
5
Did the combined Command and Service Module and Lunar Module perform another 180° turn after transposition, docking and extraction?
8
How long is the Apollo Lunar Module extraction window?
5
Launch window for the Apollo Lunar Module?
7
How much were the LMs maneuvered to their landing points?
28
Could the lunar module have moved to a different spot?
1
How was a safe tilt angle ensured for liftoff of the Apollo LM?
17
Apollo 14-17 - Why didn't they keep the Lunar Module docked as a lifeboat for the way back to Earth?