At what surface gravity can't astronauts do full steps anymore?

We know that on the Moon in ~1/6 g the Apollo astronauts couldn't make full steps because they jumped with each step. At what surface gravity could you walk more like on Earth and at what gravity would you rather hop like on the Moon? Would walking on Mercury (0.377 g) and Mars (0.38 g) be more like on Earth, the Moon or something inbetween?

Short answer:
You would transition to running at what is a comfortable walking speed on Earth, and movement would take about half of the energy it does on Earth (Source 1). This does not take into account the effect of wearing a giant, restrictive suit.

Explanation:
Imagine walking as if you were switching between support points (legs), and using them as a sort of inverted pendulum. Put one leg out in front of you, it falls down, then meets the ground and pushes you up. Once you are directly over that leg, you start falling down again, but before you face-plant, you put out your other leg, and the cycle repeats. As you walk, your center of mass moves in a sort of bouncing motion. 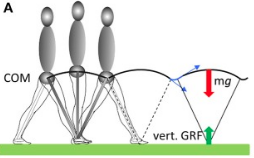 From this idea we can derive the Walking Froude Number (Wikipedia link), which is the centripetal force needed to hold the "pendulum" to the ground divided by the force available from the weight of the person: ((m*v^2)/l)/(mg), where m is the mass, v is the forward velocity, and l is the length of the leg. This equation simplifies to: v^2/(gl). A value for this number greater than 1.0 means that the center of mass (the person) will start to float off into space as the foot is pulled off of the ground.

Now, it turns out certain values of the Froude number indicate movement transitions--from walking to running, from running to sprinting, etc.--and the upper bound of walking corresponds to a Froude number of about 0.5 (Source 2). This means that we can calculate the speed at which walking vs. running is preferable, based on the local gravity. Choosing a leg length of 1.0m, the speed of the walking transition on earth should be about 1.9 m/s, while at 0.38g it would be about 1.0m/s. As you had less and less gravity, the speed at which you would transition to running/"hopping" would be slower and slower.

This is not a perfect model, and it turns out that at lower gravity levels, effects such as swinging your arms can lead to more "downforce" available to keep your feet planted than the Froude number would indicate, so the transition at 0.38g would actually take place at around 1.25m/s (Source 2), and at very low gravity levels, the transition will actually take place at a Froude number greater than 1.0. Source 2 goes into a greater depth of analysis if you are interested.

4
Predictive simulation of gait on Mars?

7
Any scholarly or serious work in Sports Science for the low surface gravity of Mars or the Moon?
2
What is the blue box that the Exp. 53 Astronuats/Cosmonauts carried with them?
11
What would the human gait look like on Mars?
6
What would a candle flame look like in low gravity?
3
How low would gravity have to be for the balance system to fail?
1
What counts as "0 mGal" in these gravity maps?
17
What would ice-skating be like on Europa?
2
History of investigation of lunar and Martian surface gravity
8
What does the Moon's gravity feel like? If you don't move, could you still tell you're on the Moon?