What are the ISS's eight "power channels"? How do they work?

Monday morning, teams identified an issue with the International Space Station’s electrical power system and are working to identify the root cause and restore full power to the system. There are no immediate concerns for the crew or the station. An issue is being worked with a Main Bus Switching Unit (MBSU) that distributes electrical power to two of the eight power channels on the station. Flight controllers have been working to route power through the remaining six power channels. Electrical power generated by the station’s solar arrays is fed to all station systems through these power channels. Discussions are underway to determine any impacts to SpaceX’s CRS-17 cargo resupply mission targeted for launch May 1.

Is this like house wiring, where a circuit breaker box will split the power and hard wire it to different locations, and if one breaker gets thrown, that area is blacked out until you route extension cords? Or can areas choose or select from at least more than one channel?

My answer to this question shows one power channel: How does electrical safety system work on ISS?

You can read about the gory details of each channel in section 3.1.3.2 and subsequent of this document

This diagram shows how the eight channels can be interconnected through the four main bus switching units (MBSUs) (normally all the channels are isolated from each other). The small boxes inside the MBSUs are Remote Bus Isolators (RBIs) - essentially switches that can be commanded open or closed. 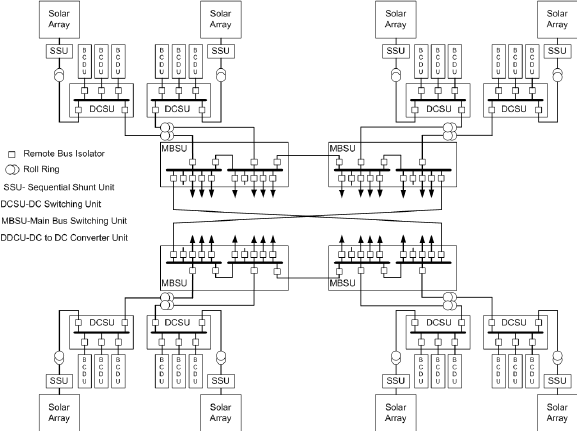 The arrows are where the users of power connect. Depending on what the failure in the MBSU is, the ground may be able to command workarounds to restore the user power.

MBSUs have failed before and been replaced by EVA or robotics. The last time one failed, it simply lost the ability to be commanded so it was "stuck" in its last configuration but still provided power.

The Station’s four MBSUs all reside on the central S0 Truss and each accepts primary power from two of the station’s power channels which it then distributes downstream to direct-current converters that create the secondary power flow to the various users. MBSUs can be cross-tied to re-wire the Station’s power system architecture in the event of an upstream failure.

So depending on what failed, you could lose all the user power to one or two channels from an MBSU, or you could lose the ability to reconfigure the power supply to those channels. Or both.

That last linked article is pretty good and includes an explanation of how the crew can install "jumper cables" to regain some power if the MBSU goes down completely.

Update: This nasaspaceflight.com article reports that the failed MBSU was MBSU 3, and that it was a total failure, resulting in the loss of power channels 3A and 3B.

Not the answer you're looking for? Browse other questions tagged iss solar-power power electronics or ask your own question.

14
How does electrical safety system work on ISS?

16
What is the power requirement of a spacesuit?
3
What are low-mass ways of supplying power for a 4.5kW ion thruster?
2
What are the challenges in building a supercritical CO2 gas turbine power plant for a Mars habitat of 6 astronauts?
1
What is the relation between the rocket equation and work, energy and power?
5
How are the silicon PV cells constructed in the ISS's solar panels? Are they as flexible as they appear here?
9
How are the orientations of the ISS' eight independent solar arrays optimized?
3
How many "main" batteries does the ISS have? How many are still nickel-hydrogen?
4
What are the Basics of CubeSat Power Supplies and Systems?