The space probes Pioneer 10, Pioneer 11, Voyager 1, and Voyager 2 are the first man-made devices to have escaped from our solar system.

The main problem they face is the lack of power source in them.

So they are not able to contact Earth correctly....

Is there any way to find or track these probes with any of the newest technologies?

Voyagers are still active, and albeit they don't have the power required to run all the scientific equipment onboard and some of it stopped working by now, they still transmit telemetry data streams towards the Earth that is picked up by NASA JPL's 70-meter antenna at Goldstone, California, part of the Deep Space Network. Quoting from Wikipedia on Voyager program:

The two Voyager spacecraft continue to operate, with some loss in subsystem redundancy, but retain the capability of returning scientific data from a full complement of Voyager Interstellar Mission (VIM) science instruments.

Pioneer probes are however not transmitting anything any more. Well, they might be but their signal is too weak at the distance to the Earth they are at (currently, Pioneer 10 is roughly 110 AU, and Pioneer 11 roughly 89 AU away) and due to deterioration of the thermocouple junctions in their RTGs, they don't generate enough power required to operate their transceivers and their signals being picked up by even the most powerful radio antennas. According to NASA, Pioneer 10's last, very weak signal was received on Jan. 22, 2003, and the last time a Pioneer 10 contact returned telemetry data was April 27, 2002. For Pioneer 11, NASA assessed that its transmitter will fall silent altogether some time in late 1996 and in September 29, 1995 announced they're ending Pioneer 11 operations.

Before Pioneer probes went completely silent on us, SETI used to use Pioneer 10 as a test target during their Phoenix Project, serving as a good approximation target for an ETI signal. Problem with detecting Pioneer probes now is their distance and the power of their transmissions, if they still transmit at all (likely not, and their RTG thermocouple junctions deteriorated beyond supplying required power to transmit anything by now). So even moving much closer to the probes and listening in likely wouldn't result in success.

For example, for omnidirectional transmissions at 120 AU, the required transmission power is 1.6 kW using EIRP isotropic antennas, defining detection range of a 305 meter diameter circular aperture receiver antenna, similar to the Arecibo radio telescope. Pioneer probes of course used directional 2.74 meter diameter parabolic dish high-gain transceiver antennas, so the total power required would be much smaller, but their 8 W output simply wouldn't be enough for the very faint signals not to be lost in the background noise.

Direct optical imaging would of course also be impossible from Earth or its vicinity, with Hubble Space Telescope (HST) resolving Pluto at roughly 16 x 16 pixels, and all these probes are far more distant to us than Pluto is, and of course, Pluto is a dwarf planet, that's orders of magnitude larger imaging target.

We currently cannot track Pioneer 10 or 11.

Someone on the XKCD forum calculated how much radiation the Voyager probes emit besides their radio transmissions. The heat they give off is emitted as infrared light:

Note that the radiation we're talking about would be in the infrared frequencies, not visible light. Still, an apparent magnitude of 30 is about the limit for the biggest ground-based IR telescopes.

But this discounts the angular resolution of a telescope. The Pioneers and Voyagers are much too small to be resolved. For example, here's a Hubble image of Pluto and its moons. Pluto is only a few pixels across: 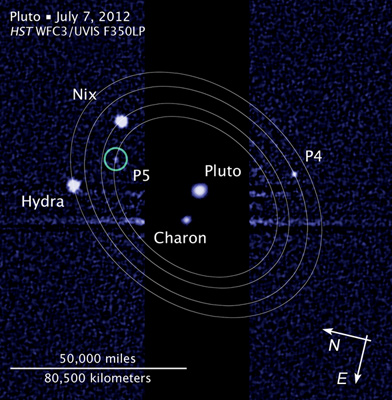 So a space probe at that distance would fill only a fraction of a pixel. Here's a Spitzer IR image of a dwarf planet: 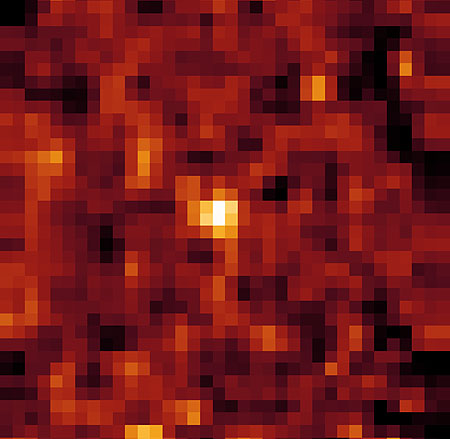 I suspect a space probe would be lost in the noise.

Given that they are (1) powered by radio-thermal generators, (2) therefore above background temperature, and (3) on known trajectories, they are pretty easy to track. An orbital infrared telescope should be able to find them pretty easily. They are a small warm object on a known course.

Pretend we are using the best we have (Hubble?) at 0.05 arcsecond resolution (meaning that's the smallest object that can be detected above the background noise)... at P10 of roughly 120AU, the current radius being imaged by Hubble at 0.05 arcseconds, is roughly 4500 km. Obviously Pioneer 10 is much smaller. Another perspective, Hubble can't see the lunar landers on the moon's surface, here is an article covering that... http://hubblesite.org/explore_astronomy/hubbles_universe_unfiltered/blogs/angular-resolution-and-what-hubble-cant-see

Not the answer you're looking for? Browse other questions tagged artificial-satellite probe voyager interstellar-travel pioneer or ask your own question.

36
Is there any way to communicate with Pioneer 11 through Voyager 1 or 2?
20
At what approximate distance will the New Horizons spacecraft resolve Pluto better than the Hubble Space Telescope?
9
Why has the Earth's motion carried it out of view of Pioneer 11's antenna?
6
How are precision trajectory measurements made of trans-Neptunian spacecraft?
-1
Voyager location
2
Did anyone suggest theories on the sounds voyager 1 captured from 2012-2013?

13
Does cosmic dust pose a problem for long-term satellites, telescopes and probes?
36
Is there any way to communicate with Pioneer 11 through Voyager 1 or 2?
12
What significance did Pioneer 10 & 11 have?
7
Any evidence for a KBO fly by from one of the Voyagers or Pioneers?
33
How do we know that Voyager's data is correct?
9
Why has the Earth's motion carried it out of view of Pioneer 11's antenna?
43
Would we be able to detect an extraterrestrial "Voyager" if it came near us?
7
Unknown Moons and Planetary Flybys
6
Could the Voyager spacecraft be spin-stabilized to keep their high gain antennas pointing towards the Sun (and therefore Earth)?
1
Where can I get data on deep space satellites or probes like voyager 1