How much of a rocket's energy is used to achieve altitude vs horizontal velocity?

Given how it is significantly easier to achieve suborbital spaceflight, I was wondering about how a rocket spends its energy budget. If you magically could launch a rocket from 0 km/s but from an altitude of 100km, how much energy would you "save" for not having to climb that vertical distance.

I'm wondering this because someone suggested space planes could provide significant savings over rockets due to not having to expend as much energy climbing through the atmosphere, but my understanding is that most of the energy is expended in generating horizontal thrust, so getting to skip 25/50km of altitude but still having to accelerate laterally wouldn't produce savings. I tried finding the answer but I couldn't find much beyond variations on "getting to space: easy, staying there: hard".

So it’s frequently pointed out energy the energy of orbital speed is around 30 times as much as potential energy of 100 km altitude. For example this XKCD piece concluding achieving altitude is a piece of cake compared to reaching orbital velocity.

What Randall Munroe fails to consider is gravity loss. Each 102 seconds of vertical ascent inflicts 1 km/s of gravity loss.

So there is a big incentive to minimize the time it takes to reach the Karman line. A booster stage will have more rocket engines and often lower ISP but higher thrust propellent.

Even though a booster only provides a fraction of the delta V budget it can easily be 2/3 or a rocket’s cost. SpaceX’s reusable boosters is very important accomplishment.

I’m attaching graphics of two pages from the coloring book I’m working on. (Note to other Space Stack Exchange particpants -- I’d be grateful to anyone who reviews and critiques this material -- I do make mistakes and hopefully most of them will be caught before publication).

I constructed an Excel spreadsheet attempting to model a trajectory with Saturn V ‘s acceleration profile. My (questionable) model seems to show starting from 100 km would save about 1 km/s delta V. Even starting from that height your thrust must have a vertical component or you would fall back into the atmosphere. 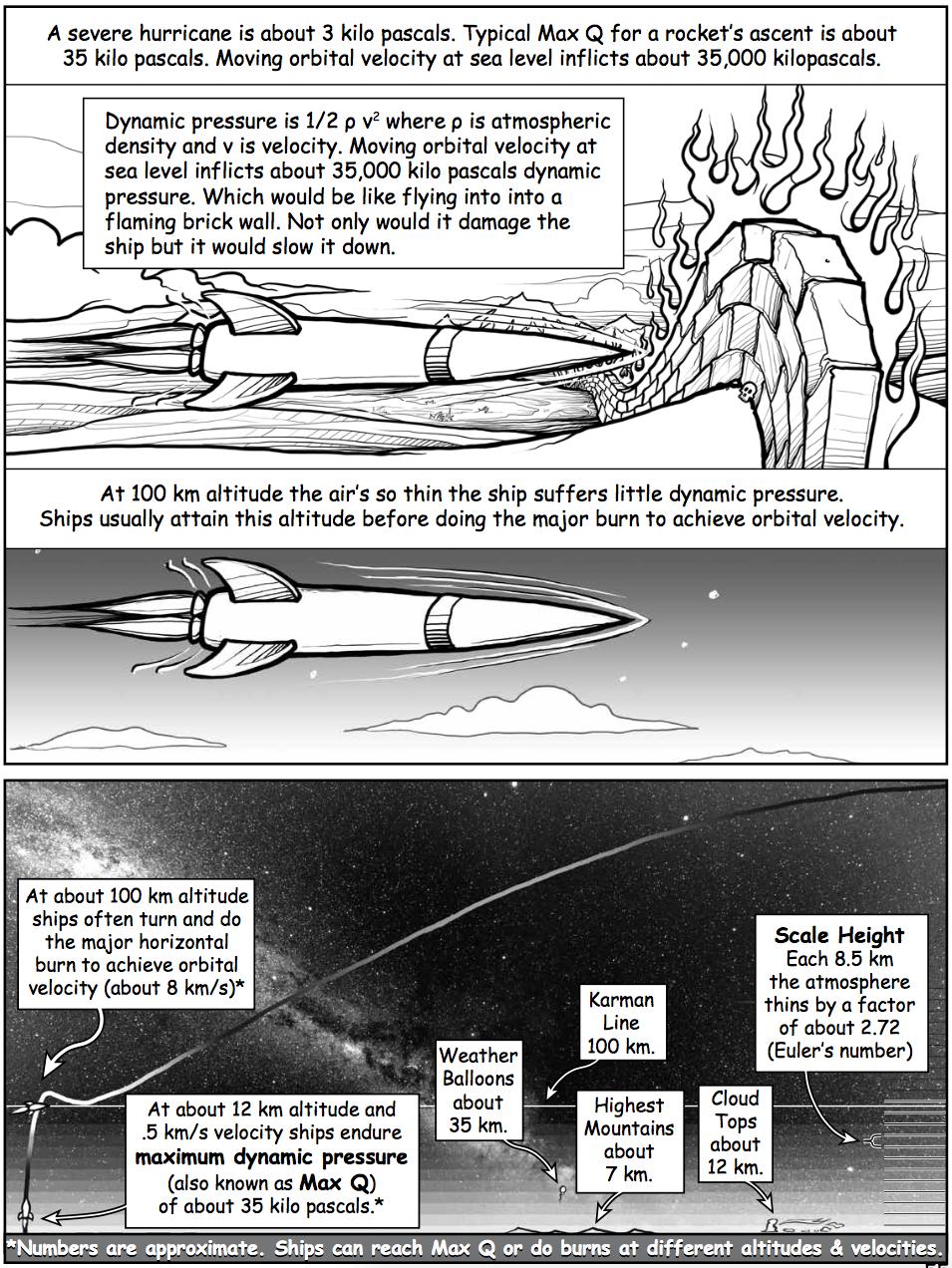 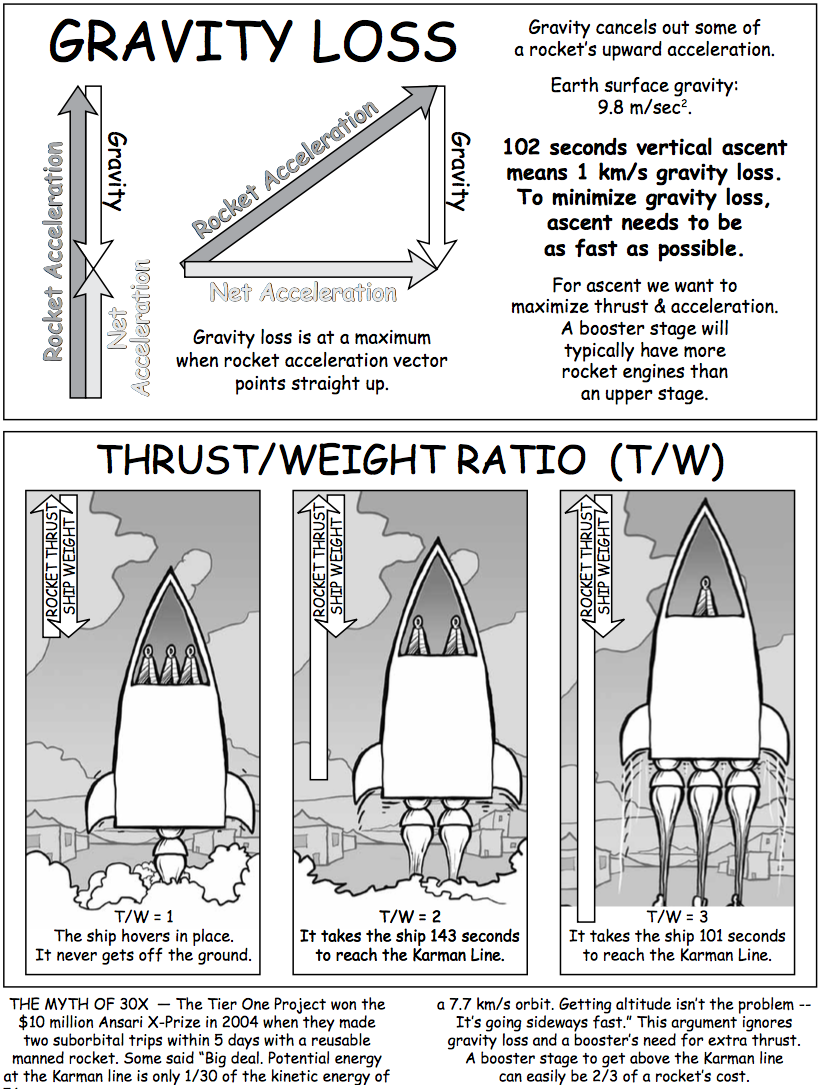 One of the things to think about is rockets don't have energy budgets. They have delta-v budgets. Try and think of it that way but: The majority of the energy in a 100km orbit above earth is in 'going sideways'. However besides the lack of numbers this doesn't answer your question. For example how much dV is needed to gain attitude is at least the amount you would need to coast to your target altitude in a vacuum. But doing this as part of a way to get to orbit is only one (inefficient) way of getting there. The dV saving is at most this. There is no good bound in either direction.

A few things are worth considering to get a feel for the problem:

Let's do the simplified theory first. If dV was the only concern and there was no atmosphere. With infinite TWR, you could reach a "sea-level" orbit without any energy or dV being expended upwards. Further the theoretically most efficient way to use dV to gain altitude is a Hohmann Transfer, the Hohmann transfer from sea level to 100km around earth is small. Concretely around 60m/s, which compared to 7800m/s for the orbital velocity in the first place is tiny.

So yes, there are many meaningful ways in which your intuition and the saying about staying there are correct. If you simplify things down too much, then especially when you consider that going there then going fast enough to stay there is not a very efficient way of doing things: then 100% lifting rockets up before you launch them is silly, it gains very little for a lot of effort.

However, these are way to big assumptions to ignore. When you add these factors back in things start to make more sense. Drag and gravity losses are a significant factor in current rockets and they are designed to compromise these things. If you didn't need to worry about TWR and being aerodynamic rockets could be made much lighter, which is the holy grail as this means less fuel is need, which makes them lighter. Etc, etc.

I know this is anti-climactic but its really hard to put a number on how much mass/money this would save as it changes a lot of factors, but its hard to imagine this not being at least a 20-30% mass saving.

Another thing is wings etc don't just get you altitude, they might also get you speed. By not needing to use valuable dV just to keep you up, you can fly through the air for long enough to make use of atmospheric engines. Jet engines are a lot more fuel efficient than rocket engines at low speeds, so if you can it would make sense in theory to want to use them when you can.

If you usefully use this extra speed and knock mach 1 off your dV requirements the savings could be huge.

To achieve a low-earth orbit, you must spend about 9.4 km/s worth of fuel. Low earth orbit velocity is around 7.8 km/s. Most of the energy expended goes into moving sideways, and only about 1.6 km/s or 17% is spent fighting gravity/aerodynamic forces/gaining height.

My answer is corroborated by this XKCD what-if. Getting to an altitude that counts as 'space' is relatively easy. Getting the rocket to stay there is much, much harder.

Not the answer you're looking for? Browse other questions tagged launch rockets orbit spaceplane or ask your own question.

5
Benefits of air-launching a rocket

19
How much fuel was used for a Space Shuttle launch?
15
How much Energy is required to put 1 kg in LEO?
9
How much potential volume in a rocket's tank is actually used for fuel?
4
Is an orbital launch more like a vertical climb or a Hohmann Transfer?
5
How can the delta-V to a specific altitude in Earth orbit be calculated?
5
How can I find the time required to achieve certain velocity in orbit with changing mass?
16
How much propellant is used up until liftoff?
4
Just how pointy does a rocket's nosecone need to be?
18
How much of the energy of a rocket ends up as a noise?