Why does the Electron rocket throw sparks; especially at SECO?

The RocketLab YouTube video STP-27RD Launch - 05/05/2019 shows the exhaust plume from the second stage engine evolve as the atmospheric pressure drops. During this time there are frequent outbursts of presumably hot glowing particles in the exhaust, some of them appear to be moving far slower than the exhaust velocity.

The engine burns RP-1 and LOX. Usually when we talk about soot for example, it appears to be a continuum of so many fine soot particles (I'm guessing microns in size or smaller), but these have got to be much larger in order to be so individually bright and distinct.

What are these exactly, and why are the so prevalent from the Rutherford engine? 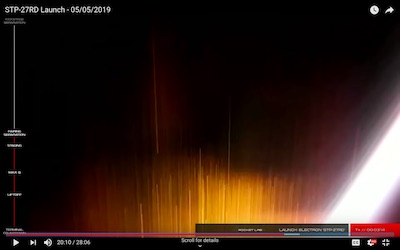 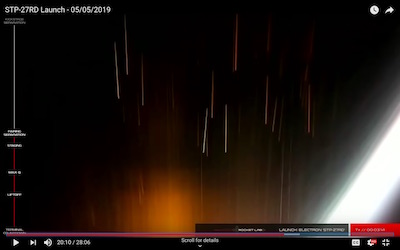 Tim Dodd, the Everyday Astronaut, just uploaded an interview with Peter Beck from Rocket Lab where he asked exactly this question. His answer was that soot build up at the injector and breaks lose from time to time. So basically its just carbon that lights up due to the heat.

Unofficial transcription based on listening and watching YouTube's inacurate closed-captions:

Dodd: Second stage has a bunch of sparks that always shoot out the nozzle. What’s that from again?

Beck: Yeah, so the Rutherford engine is really high performance, and what that actually is, I know it’s quite funny, you see people talking “that must have been an ablative nozzle”, despite the fact that it’s glowing bright red! But no, they’re little soot deposits.

So the soot deposits kind-of build up on the injector face like stalactites, and then they get to a certain size and break free and then it’s soot entrained — carbon entrained in the exhaust plane.

Not the answer you're looking for? Browse other questions tagged identify-this-object exhaust rocketlab electron or ask your own question.

14
What are they doing to this rocket following its test fire?
7
how much reusable are electric pump fed rocket engines like Rutherford Engines of Electron rocket?

1
Why does Rocket Lab plan to deploy first, circularize later?
2
Is it coincidence that the Electron has very similar dimensions to the Pegasus?
4
Air-launching an Electron-like LOX-based rocket from a plane; technical challenges?
0
How does the camera make the exhaust of the Electron's RP-1/LOX exhaust transparent?
6
Electron rocket holding & releasing mechanism
7
Why parts of RocketLab's Electron become white before launch?
1
Payload capacity of Electron rocket?