Why don't all SSME turbopumps gimbal with the engine?

Some of the joints are visible in the picture below: 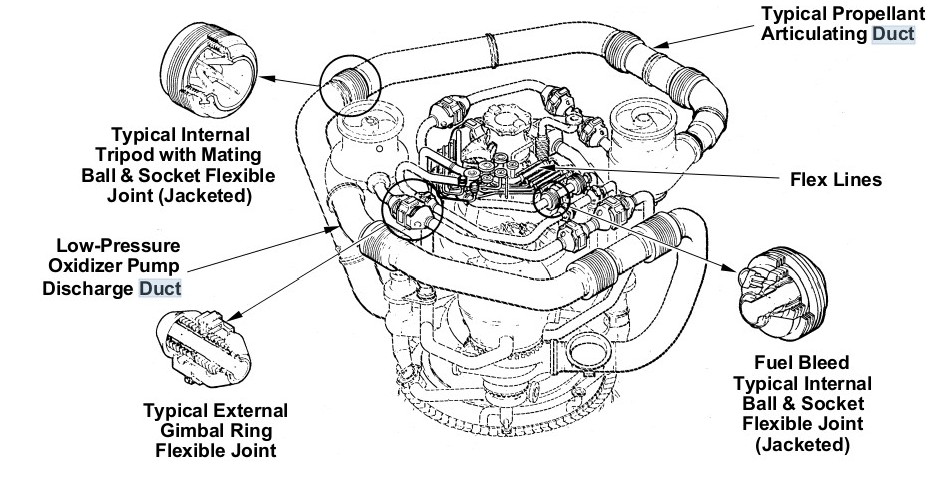 What is the reason behind such engineering decision? Why are the low-pressure pumps not gimbaling with the engine? If they were mounted to the engine, all the lines downstream would be rigid. The flexibility of the propellant lines would be provided by the supply manifold upstream of the low-pressure turbopumps. This looks like a simpler solution, because of:

There must be some hidden reason why the SSME designers chose to fix the low-pressure turbopumps to the orbiter and forced themselves to use multiple articulating joints on high pressure lines. I would like to understand that reason.

Start by thinking about why the low pressure pumps exist as all. Why can't the entire pumping task be done by single (multistage) pumps on the engine? Why did the engineers feel the need to have separated low pressure (LP) and high pressure (HP) pumps at all?

Because the engine gimbals, there needs to be a flexible lines to feed fuel and propellant to the engine yet still allow motion. That line also has to handle temperature (length) changes, work when iced up, have low mass, etc.

That line feeds large quantities of liquids near their boiling point to an HP pump. The pump is sucking really hard to move that mass. Because of the pressure drop of moving through that line, the end near the HP pump is below the pressure at the start of the line. If that line starts at just tank pressure, this is pretty much a recipe for cavitation(i.e. spontaneous boiling), which causes all sorts of problems up to destruction.

To avoid cavitation, the LP pumps were included. Pretty much by definition, they had to be before the long flexible line so that their output would pressurize that line; the additional pressure from the LP pump meant that that the input suction pressure of the HP pumps would never be below the vapor pressure of the fluids, so they wouldn't cavitate (i.e. spontaneously boil). So the LP pumps were mounted to the large, fixed tank piping, hence directly to the Shuttle framework.

TLDR: The LP pumps entire job was to pressurize the feed to the HP pumps. That feed starts at the bottom of the tank piping, so that's where they were put.

(Another approach to cavitation reduction is subcooling the fluids, which is interesting on its own)

Not the answer you're looking for? Browse other questions tagged space-shuttle engines engine-design ssme or ask your own question.

4
At what pressure ratio did the fuel turbopumps of the F1 and J2 operate?
8
What is the source of the 'whoop' sound made before the liftoff (T-3s) of Atlas-V rocket?
6
SSME propellant duct routing
10
Why is SpaceX's Raptor's design so simple in comparison to SSME?
8
Why is multi-spool pump very rare on rockets?
5
Why don’t any engines use turboelectric oxidiser pumps?