Could the Voyager spacecraft be spin-stabilized to keep their high gain antennas pointing towards the Sun (and therefore Earth)?

A suggestion has been made that the Voyagers may run out of propellant and so may not be able to maintain pointing near the Earth for communications.

Although the craft can be turned if necessary, the voyager probes are not intentionally rotating. They use small thrusters that try to zero out any rotations.

These thrusters aren't infinitely precise, nor are the instruments that drive them. So there is some error in the firing that means the probe has a (small) residual rotation. Instead of having a perfectly fixed direction, it will slowly drift away from the intended attitude over time. When the residual rotation moves the platform too far from the antenna pointing at earth, the thrusters fire to to return the alignment.

With what little remains of the Voyagers' cold gas thruster propellant, could the spacecraft be given a slight rotation in order to approximately stabilize one axis of their attitude? 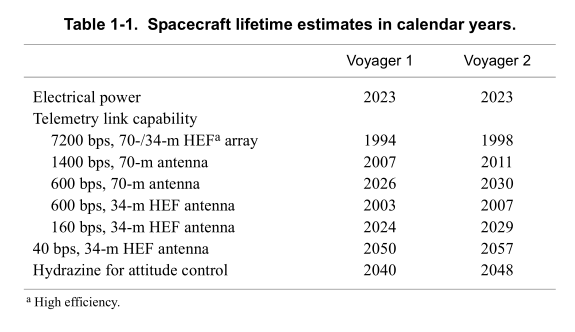 As in all communications around the end of life for Voyager operations, this lifetime estimate considers the mission to end when there's no longer enough power to run any of the science instruments and/or the transmitter and keep the spacecraft alive.

The mission objective of the VIM is to obtain useful interplanetary, and possibly interstellar, fields, particles, and waves (FPW) science data until year 2020 and beyond when the spacecraft's ability to generate adequate electrical power for continued science instrument operation will come to an end.

Not the answer you're looking for? Browse other questions tagged attitude voyager antenna end-of-life spin-stabilisation or ask your own question.

10
How long could we communicate with Voyager 1/2 if power wasn't a problem
8
How would the Voyagers finally die if allowed to transmit to the bitter end?
3
What does it mean when the Voyagers "switch thrusters"?
4
How much do the Voyagers' attitudes drift over time? How often are their thrusters used for attitude control?
3
Have there been any Foucault pendulum demonstrations beyond Earth?
1
How to compute footprint(size) of beam of sat.system?

9
Coordination of RCS on Apollo CSM/LM
12
Xenon vs Hydrazine, "Should I Stay or Should I go?" Dawn mission decisions
3
How many times would two astronauts have to run around Skylab to turn it by 10 arc minutes?
5
How exactly was Apollo CSM attitude changed (from a current one to a new required one)?
6
Solid state thrust vectoring
3
Attitude determination with phototransistors and magnetometer
3
How (the heck) can thrusters alone stabilize New Horizons well enough to take high magnification 30 second long exposures in order to see +21 m objs?