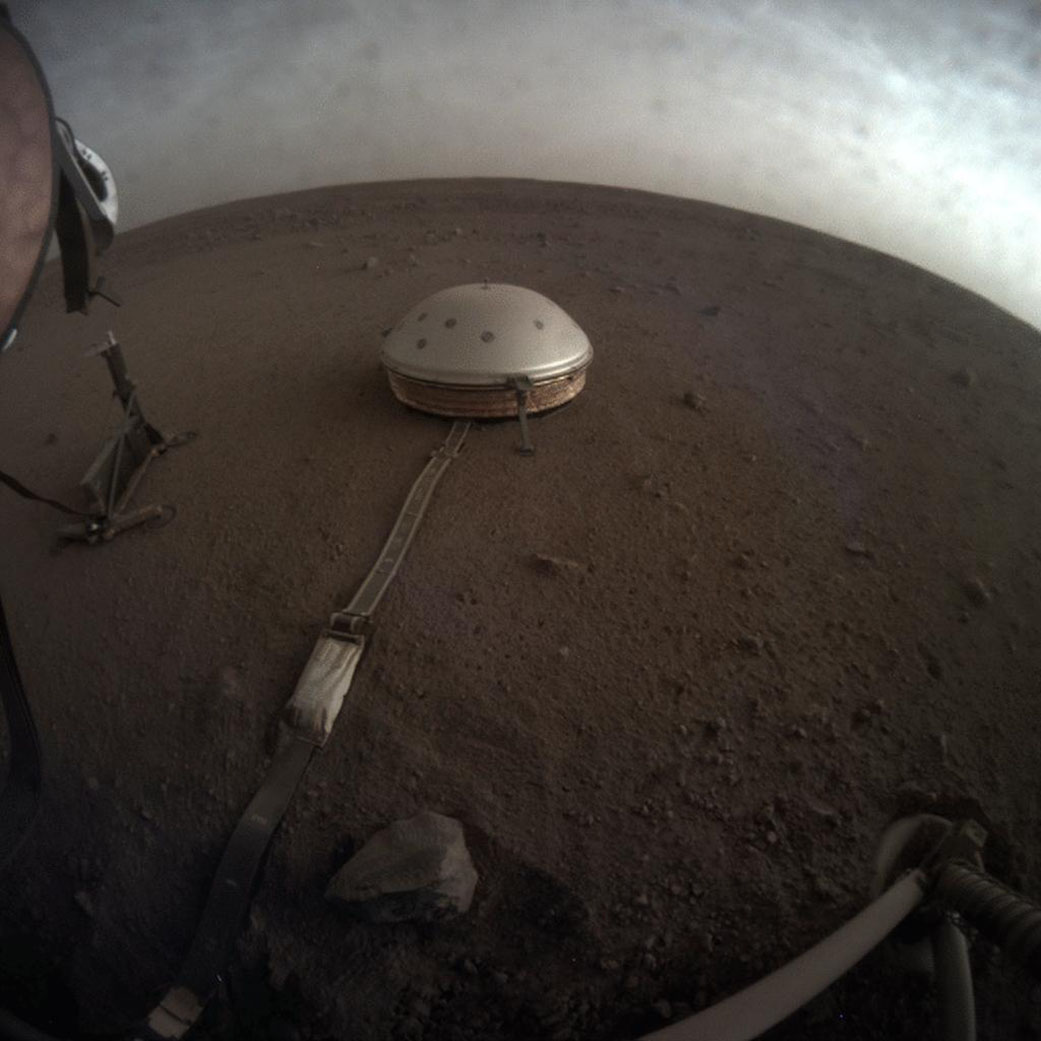 tl;dr: $\text{HP}^3$ and SEIS compliment each other, SEIS listens to $\text{HP}^3$. SEIS adds a digital filter to prevent saturation of its most sensitive instruments.

"The most powerful jackhammer on Mars" is minuscule.

The Heat Flow and Physical Properties Package ($\text{HP}^3$) is a "self-hammering nail". The whole assembly weighs 3kg. It uses a 2 Watts to compress a spring and release it against the head. In testing it took over 5 hours to go 5 meters.

Is anything done to them to make them less sensitive to the shocks produced...

SEIS listened to $\text{HP}^3$ with special filters in place to avoid overloading its most sensitive instruments.

The SEIS team had this to say in Review of the commissioning phase of the SEIS seismometer on Mars.

During the same period as the calibration operations, the SEIS seismometer also began listening to the vibrations caused by the HP³ mole as it headed down through the Martian sub-soil during sols 92 and 94.

The data collected showed that the SP sensors of the SEIS seismometer, well-suited to high-frequency measurements, record a variety of information—not only on the penetration operations but also on the mole’s internal operation. The signals are so strong when the mole begins hammering that the VBB pendulums saturate.

The objective of the SP sensors is to determine as accurately as possible the arrival time of the signals generated by the complex movements of the mole’s various moving parts whenever it hammers to move forward. A dedicated digital filter will be uploaded to the eBOX electronics unit that controls SEIS to increase the temporal resolution. Depending what the SP sensors hear, the project engineers will know whether the mole is continuing its downward journey (even slowly), if it is just bouncing off something in its path, or if it is completely blocked.

A second digital filter will also be activated to prevent the seismometer’s ultrasensitive VBB sensors from saturating when HP3 uses its hammering mechanism. By analysing the difference in seismic wave propagation depending on the materials encountered, it may be possible to identify the presence of a very hard layer some 30 cm deep.

Not the answer you're looking for? Browse other questions tagged mars planetary-science insight seismology or ask your own question.

21
Has sound ever been used to diagnose a problem not shown by other measurements?
7
Has Mars quaked yet? Any scientific speculation when it might?
4
Just how sensitive is the Insight seismometer?
5
How was InSight's vertical seismometer (accelerometer) tested in Earth's stronger gravity?

0
How long was the trip from Earth to Mars for Insight?
4
Just how sensitive is the Insight seismometer?
13
How unreachable are Jupiter's moons from Mars with the technology developed for going to Mars?
1
What is VBB recentering (InSight lander's Very Broad Band seismic pendulums)?
7
Has Mars quaked yet? Any scientific speculation when it might?
1
When and where on Planet Mars are the Sun's rays the most blueshifted?
3
How Ingenuity ensures it does not fly away from the range of connection from Perseverance?
3
Which is currently further from their landing site: Ingenuity or Perseverance? How far away are they from each now?