Does being in outer space, without the glare of the Sun, have any impact on human vision? Is dark-adapted vision improved when astronauts are orbiting the Earth and in its shadow?

Answer: Yes and no.

Being in a dark environment (such as dark side orbital transit) will allow the retina to dark adapt. But a half LEO (lasting about an hour) is not long enough duration to fully dark adapt compared with 2 hours in a dark room on Earth. Dark adaptation “in outer space” will be appropriate to the ambient light level, but no more than can be attained on Earth.

Spending 2 hours outdoors in a moonless, light pollution-free rural location will likely give better dark adaptation (and allow more dim stars to be seen) than 1 hour during a dark side transit in a lighted spacecraft cabin.

The human retina constantly adjusts to the ambient light level. There is 2 hour “dark adaptation” after light level decreases, when the retina becomes up to 1,000,000 times as sensitive to light. Full adaptation takes up to 2 hours, although reasonably good “night vision” is attained after about 10 minutes. 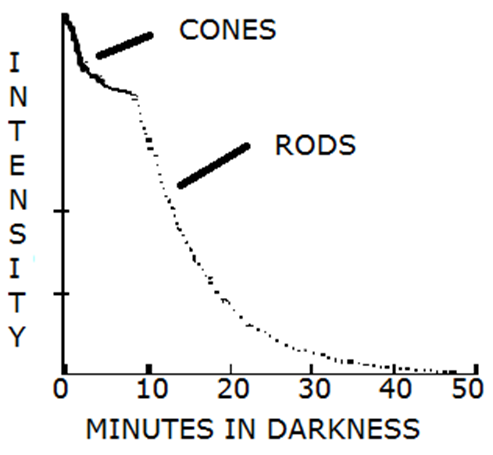 There are 2 different photoreceptors in the retina:

Cones are color sensitive. They provide our color vision. They are also densely crowded in the centermost portion of the retina so they provide that small area with our highest visual acuity. Cones are also found in lower concentration in the peripheral retina which has relatively poor color vision.

Rods are widely distributed in the periphery of the retina. They have far greater light sensitivity than the cones. Once they have adjusted to low light levels, they provide us with night vision. Their maximum sensitivity is in the blue/green portion of the spectrum, but we perceive this light as grey, not green. A forest at night is seen in black and white.

Rods are not sensitive to red light. When submarines are “rigged for red” (the crew dark-adapts their vision in preparation for surfacing at night), they wear red goggles or illuminate the crew space with dim red light. Since rods are not sensitive to red light, they "think they are in the dark" and the rods dark adapt. The red light is still sensed by the cones, so the crew can still see while the rods are being adapted to night vision.

When dark adapted, dim stars “disappear” if we look directly at them. They reappear if we avert our gaze just a few degrees since the star’s image now falls on an area of retina with rods.

The brighter stars can be seen (in color) while looking directly at them because they are bright enough to be detected by the cones in our central vision. Bright stars (like Betelgeuse) may have perceptible color but dim stars appear colorless regardless of their true color.

No, but you see more stars than ever, the Milky Way and near galaxies due to the lack of a thick atmosphere and no light pollution. Also, due to no atmospheric refraction, you see every celestial body at the place it really is.

6
What's the orange star I can see in the sky right now?
22
Does long-term residence on the ISS affect eyesight?

13
Would human "superpowers" in low gravity fade away through reduced muscle mass?
1
Footage of Space Shuttle astronauts during launch and reentry
3
Which current (2016) ISS resupply vehicles are human-rated, and how many astronauts can they each support?
4
What does space look like from space?
7
Have any space stations experienced a total solar eclipse?
144
Nudism in space: Why wear clothes anyway?
4
Does reflected sunlight from the ISS prevent astronauts from seeing the stars during an EVA?
2
Have lunar (or martian) rovers exploited shadows, perhaps for terrain comprehension or obstacle avoidance?
12
How brightly does Venus's hot surface glow at night? Could you see it? Could you see well enough to walk around?