How did Skylab's “space shower” work?

Skylab had a shower to help the astronauts bathe.

Related: Is there a better way for astronauts to bathe?

Here is a schematic of the shower system. 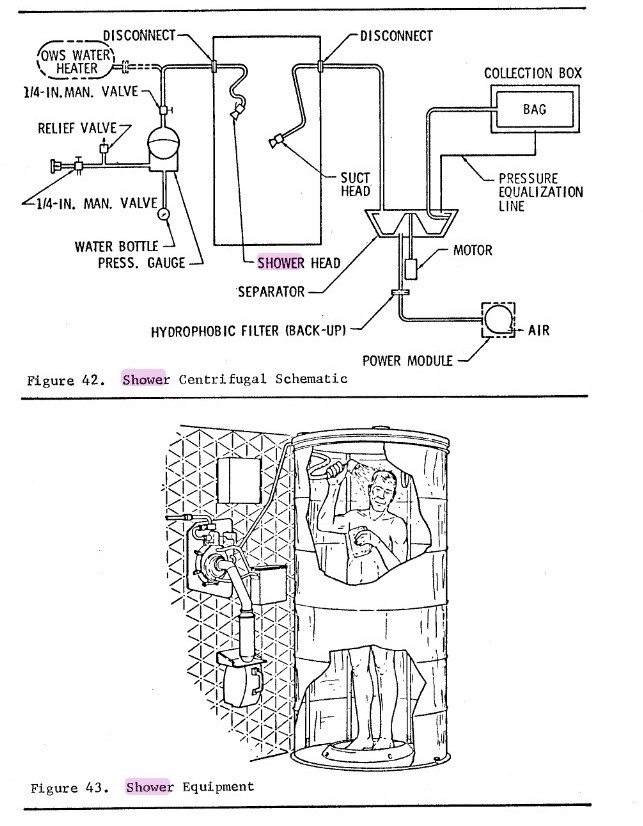 A description from here.

This is an enclosure which uses continuous airflow as a gravity substitute to move the water over the crewman. A 6-pound capacity water bottle is filled from the waste management compartment water heater, pressurized with nitrogen, and attached to the grid ceiling at the shower location. The nitrogen gas pressurant expels water from the bottle through a transfer hose and a crew- operated hand-held spray nozzle. A soap dispenser provides the crewman with 8 milliliters of liquid soap for each shower. During the shower this dispenser fastens to the ceiling with Velcro. A suction head removes water from the crewman and the shower interior. The suction head is connected by hoses to the centrifugal separator, which deposits the waste water into a collection bag. A blower pulls the air from the separator through a hydrophobic filter that protects the blower.

Jack Lousma commented in a official document recording the results of a project which sought to learn from Skylab experience to help the ISS design:

You had to mix water in a 3-quart container – so much hot, so much cold. You had soap that was probably better used in a veterinary practice, because it made you itch. We sprayed water on ourselves with a sprayer and then had to vacuum it off with a suction device.

One thing worth noting is that we were in this low-pressure environment and so whenever you got that water on you and went to dry yourself off, it got extremely cold because it was evaporating so rapidly. It took a lot of vacuuming to get all of the water out from inside of cylinder. You had to use a lot of towels to get dry. During our mission we usually just took sponge baths every night with a washcloth and a towel.

Well, I took a shower every 10 days whether I needed it or not. But I found the shower to be quite refreshing and I enjoyed it. The only downside was that it just took too doggone long to do all that stuff. So if they can find a way to take a shower a little more quickly, they’d be on the right track.

The average time for a shower was about 1 hour. You can clean up with a wash cloth in 10 minutes or less. To me, I would skip the whole thing. You don’t need a shower, even on ISS.

It worked in orbit, but, to the surprise of the author, many of the astronauts did not feel it was required nor needed. Because of the time to operate and clean up, few of the crewmen thought it worth the effort. Future systems should be simpler to operate.

Not the answer you're looking for? Browse other questions tagged astronaut-lifestyle skylab hygiene or ask your own question.

45
Can/should you swim in zero G?
11
Is there a better way for astronauts to bathe?

11
Is there a better way for astronauts to bathe?
22
How are hair and beard lengths maintained in space?
16
How is the space station's interior cleaned?
4
How did Skylab's electrographic ultraviolet camera work?
15
How was Skylab's orbit inclination chosen?
1
Did Skylab report different results on impact of zero g on humans?
10
At what altitude did the Skylab space station disintegrate?
6
What did Skylab 1 carry in its nosecone?
1
How far will I have to hold my “space binoculars” from my eyes during a space walk?
1
Did anybody on the ISS photograph this partial eclipse? How long did it last? How did they safely photograph it?