Was there any period of time when other U.S. launchers were abandoned in favor of the Shuttle?

The comments to this recent question disagree on whether the U.S. briefly abandoned other launch systems in favor of the Space Shuttle.

The Shuttle was designed to be capable of bringing all U.S. crew and cargo into and out of Earth orbit. However, the actual frequency of launches was never high enough to meet this goal. While the Shuttle continued as the exclusive vehicle for crew transport and cargo return, other launchers were being used to send up cargo.

The question therefore is: Were there any families of launchers that were discontinued because of the Shuttle, only to later return to fill the launch capacity that the Shuttle couldn't fulfill?

(The question would be best answered by considering each of the launcher families in use at that time.)

nasa space-shuttle launch-vehicle
Share
Improve this question
asked May 12 '19 at 3:07

Despite the stated goal of shifting all US launches to the shuttle, all three major US uncrewed launcher families of the era remained in production. Each family reduced production and launch rates significantly during the early shuttle era (1981-1986), but I think there was a general sense even before the 1986 Challenger disaster that the shuttle wasn't going to meet its flight tempo goals easily.

Titan production was slowed, but production of the Titan 34D bridged the gap between the Titan III and Titan IV. The Titan family flew only one successful mission out of 4 attempts in 1985 and 1986, but after Challenger, the Titan IV program was expanded, flying until its retirement in 2005.

From this overview of the Atlas family, it appears Atlas never stopped flying during the shuttle era.

Here's the chart for the Atlas family: 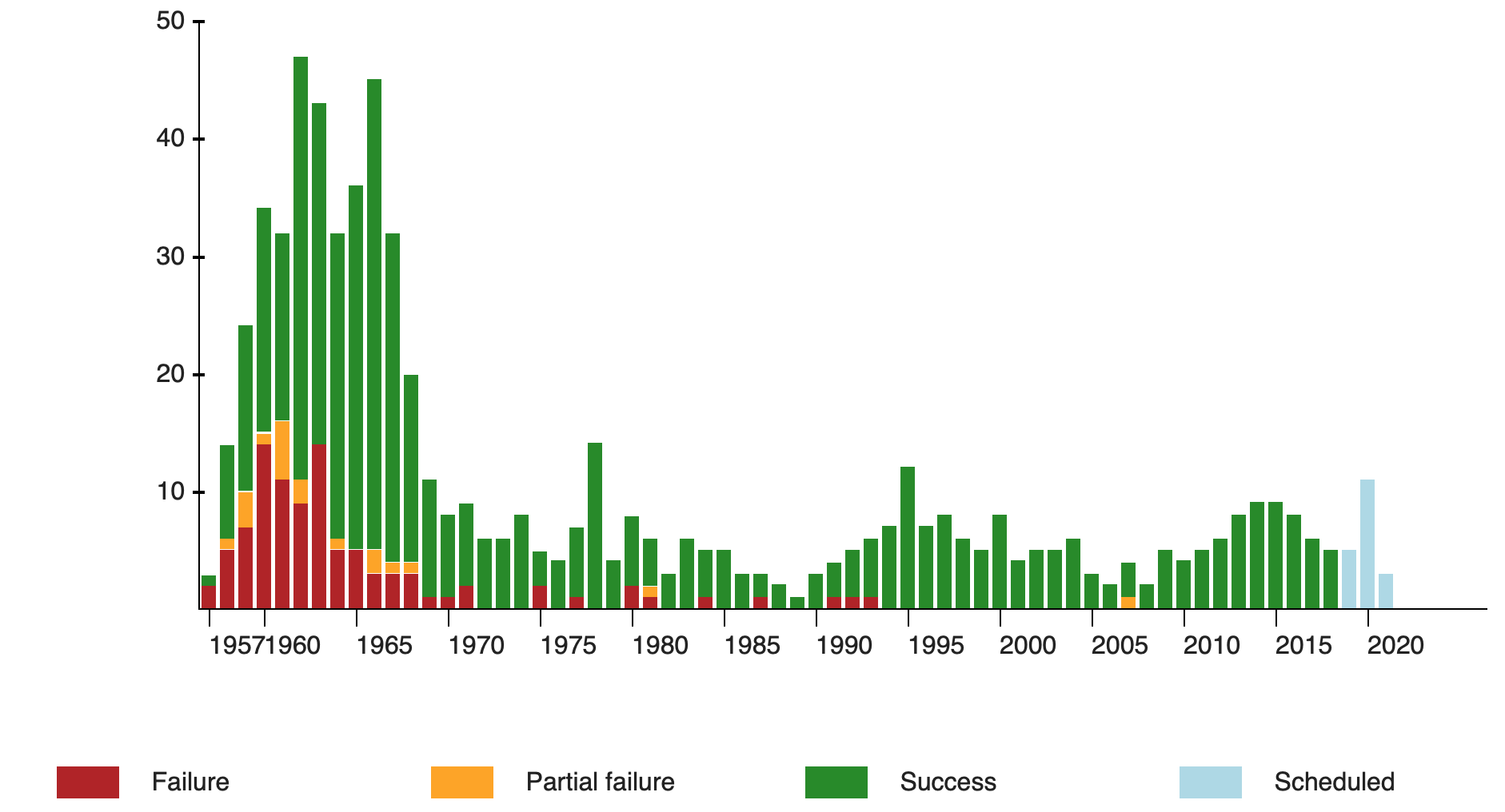 Likewise the Delta family; it came close to going out of production, and didn't fly at all in 1985, but was never quite discontinued.

Here's the chart for the Delta family: 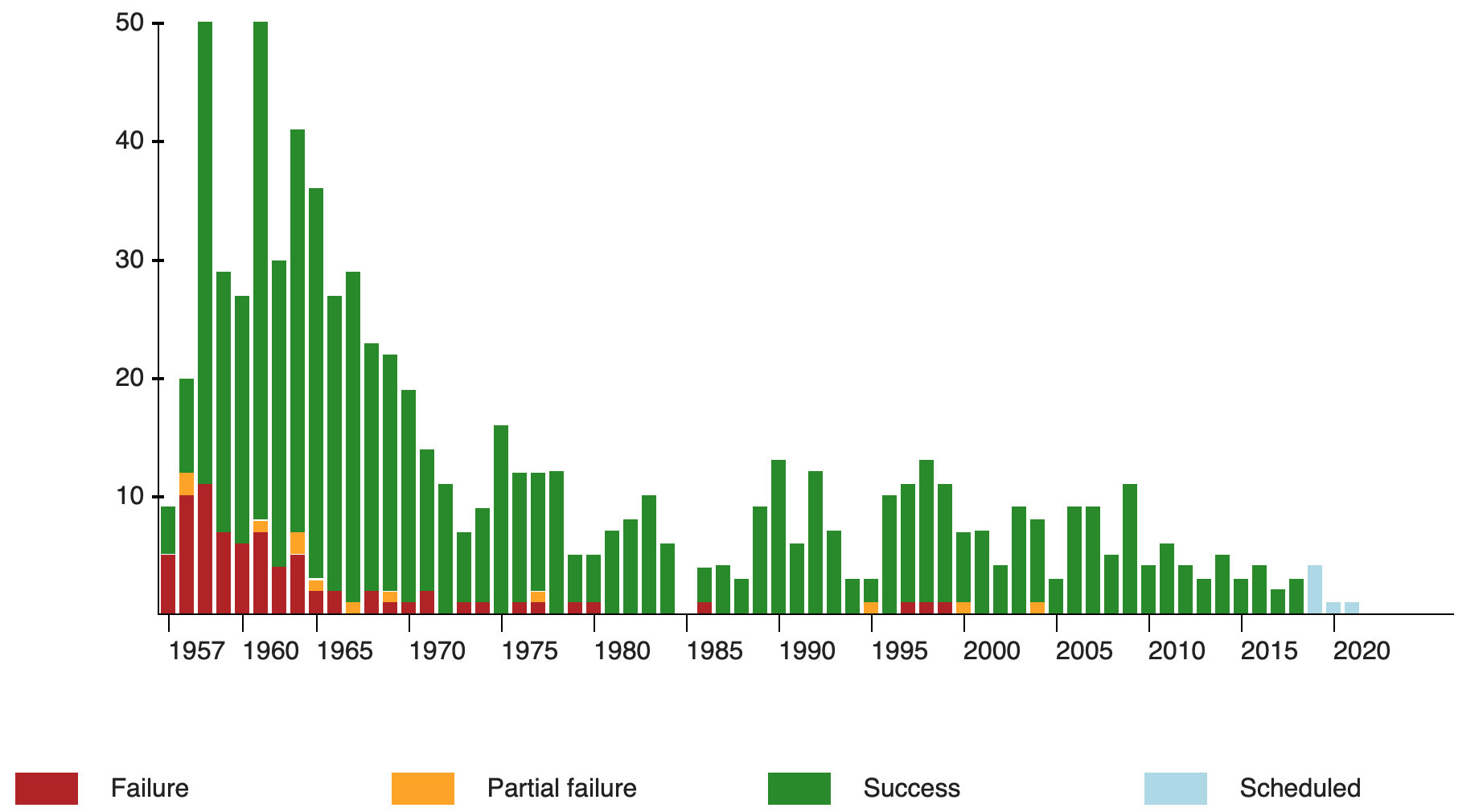 Not the answer you're looking for? Browse other questions tagged nasa space-shuttle launch-vehicle or ask your own question.

9
Why did the Americans abandon kerosene after F-1 while the Soviets continued to develop it to very high sophistication?
3
Were there contemporary criticisms of NASA's pre-Challenger plans to exclusively use the Shuttle for US launches?

20
Technology: How would a state-of-the-art space shuttle be built?
8
Why did NASA design the SLS do the job of both the Ares I and Ares V?
8
Have there been any other cheap, modular launcher designs like the OTRAG?
9
Why aren’t rocket stages modular and interchangeable?
11
How close was the U.S. DoD to getting their own space shuttle?
5
Why would the Shuttle-Transtage have been unusable for science missions?
7
Were there any cases of woodpeckers damaging Shuttle External Tank insulation other than that of STS-70?
8
How much of the printed materials (manuals, instructions etc.) were allocated for the crew's use in Space Shuttles?
3
Were there contemporary criticisms of NASA's pre-Challenger plans to exclusively use the Shuttle for US launches?