Could two satellites in the same orbit, but phased differently, be tethered in a sustainable manner?

Was reading this, and I immediately saw the problem with the angular momenta not lining up. Unfortunately, my mind likes to keep turning scenarios over and asking what would happen if x? So my question is best described by the following diagram: 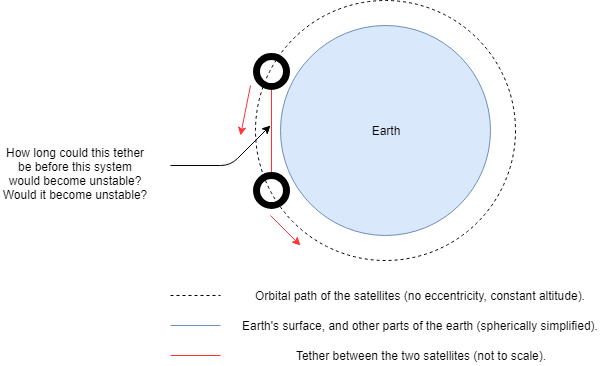 Would this system be sustainable, or would the tether being closer to Earth create a pull on the central part of the tether after x separation between the two? What would the separation be before this system becomes unstable? I currently am under the assumption that if the tether was massless, there would be no problems; you can assume any rope material if you're doing calculations.

KBelder pointed out that the tether would not look like that in certain scenarios, I suppose the scenario I want to consider is as I've mentioned in the comments:

I was assuming the two objects would be connected by connecting one end, then performing a phasing maneuver (allowing slack during the transfer) to get to the other one. This would mean that it would not be following the same orbital path (though I do not know what the path it would follow is).

I've been playing what-if in my head. If all of this is stupid, that's a completely valid answer.

Let's assume the Earth's gravitational field is spherical (no oblateness or other lumps) and stick with the OP's draglessness. Let's also assume the cable has some finite mass.

If we place just the two satellites in the same circular orbit but phased differently, then they would continue in that orbit spaced by the same amount, indefinitely.

If we then started laying out some little 1 cm long segments of cable, unconnected, also along this orbit in between the satellites, they would also stay "in place" relative to the two satellites in their own orbit. We could keep doing this until they were connected, and nothing would change.

So if the two satellites were connected by a cable and the cable perfectly followed the path of the circular orbit, then you would have a stationary state. It would stay that way.

However that doesn't mean that the stationary state would be stable.

For example, the five Lagrange points in the circular restricted three body problem (CR3BP) are all stationary states. Some are conditionally stable, some are unstable to small perturbations.

What would happen if this system were slightly perturbed?

I don't know! It's a dynamical system with large degrees of freedom since as soon as there is some slack the cable can potentially assume an infinite number of different possible shapes.

A definitive answer about this situation probably needs to be addressed numerically. It is certainly possible and probable that this has been done already. It may take some further searching to find it, stay tuned... Others are encouraged to find it first!

Actually there is even an wiki-article about this problem: Space_Tether_Wiki

Summarized: in the real world the satellites will always line up radial.

Not the answer you're looking for? Browse other questions tagged artificial-satellite space-tether or ask your own question.

9
Could I tie together two satellites at different altitudes?
5
Rotating in orbit?
2
Shape of satellite launch vehicle

39
Why are the GPS constellation satellites in such a high orbit?
5
What would be the challenges of a non-rotating tether orbiting the Moon?
1
Space elevator orbit below GSO but slow enough to be caught by an airplane
8
Do satellite uplink/downlink signals spread or leak into space?
7
Do satellites in orbit undergo translational motion or rotational motion, when initially they are not given any additional spin?
24
How did two satellites end up in almost the same orbit except moving in opposite directions?
4
Are there any related groups of satellites that are in a line of 6 or more in a row?