Why does the Earth's atmosphere as seen from space have the colors that it does?

Here is a photo of Comet Lovejoy taken from orbit. 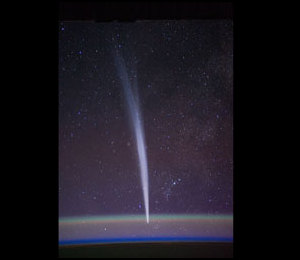 The atmosphere has 3 bands. The lowest is deep blue and so I imagine that is Rayleigh scattering, the same as what makes the sky blue.

I am stumped by the red and green/yellow bands. They are so discrete it seems like some rainbow like refraction but they are in the wrong order.

Why does the Earth's atmosphere have these bands?

atmosphere earth-observation
Share
Improve this question
asked May 14 '19 at 18:50

The upper two colours, that's an ionospheric phenomenon called Airglow which is photoluminescence from various oxygenated ions coming from the dayside of the planet.

Those 'various ions' are only produced in sunlight in the ionosphere. There is some transport of those ions to the nightside of the planet in the ionosphere, and that's how it is possible to see relatively intense colours like in your linked picture.

I'm not sure whether the lower coloured band is in fact Rayleigh-scattering.

Not the answer you're looking for? Browse other questions tagged atmosphere earth-observation or ask your own question.

10
Is Google Earth's view from space geometrically correct?
8
What are the characteristics of the Earth's atmosphere near the Karman line and why?
23
Why does Titan have an atmosphere?
48
What caused this bright light from the ground at night seen from the ISS?
4
What effects does atmosphere have on solar panels?
20
Has the Earth's red atmosphere rim ever been photographed?
7
How does the sunlight affect the height of the atmosphere?
33
Has anyone in space seen or photographed a simple laser pointer from Earth?
8
Why does Himawari-8 have problems with the Sun from 19th February to 19th April?
9
Star-shaped artifacts in SAR images of the "Suez Canal traffic jam seen from space"