Are mechanical pencils used on the ISS?

I have read through this question ("Is it possible to use mechanical pencil instead of space pen in ISS?") and it seems that without specially made pencils, it's unlikely as there are better options. (One answer mentions they were used at one time, but have been phased out).

However, at about 02:19 into the video Demonstration of Acceleration Inside the International Space Station During a Reboost, it appears that there are many mechanical pencils on the left: 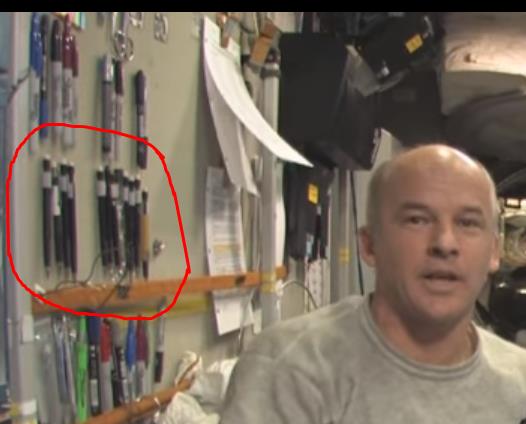 Are those mechanical pencils, or something else? That wall looks like writing utensils and they very much look like them!

iss identify-this-object
Share
Improve this question
edited May 16 '19 at 1:02

Anderson was an ISS resident from June to November 2007. Your video appears to be from 2010.

Looks like the answers to that old question could use some work. One real-world picture can smack down a bunch of theories.

37
Can't astronauts use ball point pens in space?
13
is it possible to use mechanical pencil instead of space pen in ISS?
13
Why did a shuttle astronaut have an open book during ascent?

13
is it possible to use mechanical pencil instead of space pen in ISS?
8
Why did NASA assess 3 separate and over 6 hours long EVAs are needed to replace a single failed Pump Module (S1 PM)?
7
What are the orbital mechanical consideration behind hand-launched nanosatellites from the ISS?
11
What is Astronaut Sunita Williams wearing on their wrist?
2
How are cameras arranged and used to monitor activities outside the ISS?
11
What are the two orange tabs stuck on opposite edges of each window of the ISS cupola?
9
What are these stacked panels on the ISS in this image?
13
What is Earthy controlling in the ISS cupola?
4
How old are the EVA space suits that are currently used on the ISS?
3
Do standard procedures for securing the ISS before an orbital boost burn include making sure that at least large objects are securely “strapped down”?