How will Starlink satellites deploy from the fairing and reach their orbits?

Elon Musk posted this picture of the first 60 Starlink satellites packed densely into the fairing of the Falcon scheduled to launch in a few hours. 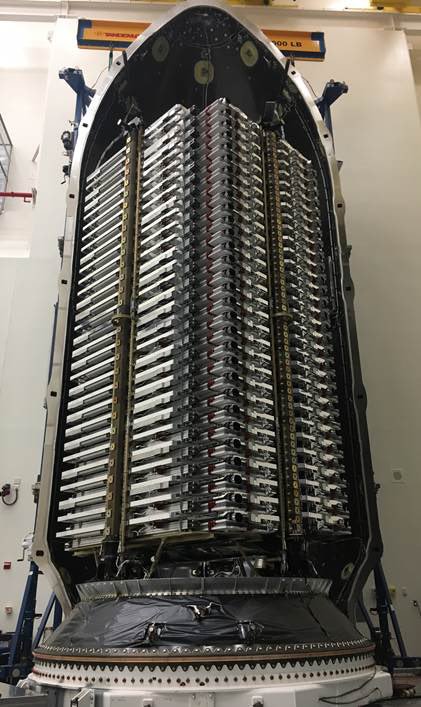 There doesn't appear to be a launcher or ejector to launch the satellites from the fairing once in orbit, so how will they be moved to their correct orbits?

Will they just be dropped off one by one, is there an ejector mechanism, or is there some other way to correctly configure their orbits?

spacex orbital-maneuver starlink
Share
Improve this question
asked May 15 '19 at 22:04

They will spin the upper stage, and release them a few at a time, then spin it up faster, and release more. Source.

In order to save mass, each of the 60 satellites will not have its own release mechanism, such as a spring. Instead, Musk explained, the Falcon rocket's upper stage will begin a very slow rotation, and each of the satellites will be released in turn with a different amount of rotational inertia.

"It will almost seem like spreading a deck of cards on a table," Musk said. There may actually be some contact between the Starlink satellites, he added, but they are designed to handle it.

Not the answer you're looking for? Browse other questions tagged spacex orbital-maneuver starlink or ask your own question.

3
What performance specification would be lower for Krypton than for Xenon in Hall effect thrusters?
3
How do Starlink trains spread into separate orbits with equidistant orbital slots?

16
How strong and “hot” is the wind on the payload after the fairing is deployed at ~110km?
6
How long will we be getting data (pictures?) from Starman and his Tesla?
4
What does the StarLink constellation look like now? Numbers of planes and inclinations?
4
How quickly can the Starlink spacecraft respond to an impending collision?
13
Why is one Starlink satellite not following the adjacent one in this image?
3
How do Starlink trains spread into separate orbits with equidistant orbital slots?
3
Why are some Starlink launches announced as instantaneous and some not?