What performance specification would be lower for Krypton than for Xenon in Hall effect thrusters?

The Ars Technica article SpaceX scrubs first attempt to launch 60 Internet satellites [Updated] (found here) discusses the use of Krypton rather than Xenon in the Starlink Hall effect ion thrusters:

The satellites are designed to control costs. For example, each will maneuver with Hall-effect thrusters—ion thrusters in which propellant is accelerated by an electric field. The conventional fuel for such a thruster is xenon, which offers high performance. The Starlink satellites, however, will use a different noble gas: krypton. It has a lower density, so the satellite fuel tanks need to be larger, and it offers less performance than xenon. But krypton can be bought at just one-tenth the cost of xenon, which matters if a company wants to fuel thousands of satellites. (emphasis added)

"It costs a heck of a lot less than xenon," Musk said of krypton. (He also joked, in response to a question from Ars about this fuel, that the satellites would be immune to invasion from Superman's native world.)

In this answer I argue that using a lighter ion gives a higher mass-specific impulse or Isp than a heavier heavier one assuming both are +1 and voltage is constant.

So I'm wondering exactly what performance specification is lower for Krypton than Xenon as mentioned in the quote.

Hall effect thrusters do not use strong magnetic fields and radio frequency power to heat electrons to high energy for ionization of the gas. Instead they rely on a DC current of electrons accelerated to a few hundred volts flowing through the gas volume for ionization. Since Krypton has a higher ionization potential than Xenon (roughly 14.0 versus 12.1 eV), either the ionization efficiency will be lower or it will require a higher cathode power.

The higher velocity of Krypton (at a given acceleration potential) means higher Isp, but lower overall thrust and/or energy efficiency. With electric propulsion, you trade thrust to power ratio and Isp. It's all tunable based on mission impulse and timelines. Hall thrusters have lower Isp, but more thrust, while ion thrusters have much higher Isp, but far lower thrust. So for long missions with high impulse (like Dawn) use ion systems, while orbital stuff tends to trade better with Hall systems.

Another change is related to the torque produced by a Hall current thruster. As the ions are accelerated through the plasma, the radial magnetic field that traps the plasma electrons will give a small kick to the departing ions. This resulting in a torque along the thrust axis. It's not large because the charge to mass ratio of the xenon ions is very low, but it's big enough that it must be compensated for. Krypton has a higher charge to mass ratio, so the angular deflection will be larger. This will increase the torque relative to the thrust, and require more compensation. Depending on how many thrusters they're using, it could complicate orbital maintenance. 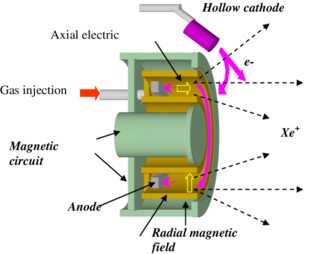 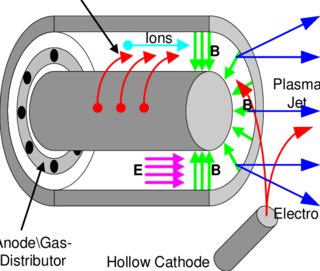 Confirming @ RocketDocRyan's answer higher power is required for the same thrust efficiency for krypton than for xenon.

Erosion rate might be a secondary specification that is worse (faster) for krypton than for xenon.

Starlink satellites use Hall-effect thrusters with krypton gas as the reaction mass[44][64] for orbit raising and attitude control.65 Krypton Hall thrusters tend to exhibit significantly higher erosion of the flow channel compared to a similar electric propulsion system operated with xenon, but at a lower propellant cost.66

Traditionally, xenon has always been the propellant of choice for EP applications due to the optimal compromise between performance and ease of handling. Although xenon has several technical advantages, its high price suffers of a remarkable fluctuation, posing serious budget concerns. To reduce propellant cost, a more economical alternative to xenon needs to be identified, while retaining thruster performance levels, without disregarding crucial system level considerations.

The KHT project plan focuses on an experimental campaign to test, with pure krypton and with different Kr-Xe blends, a 5 kW Hall-effect thruster, the Sitael-HT5k, designed to operate with xenon. Main objectives of the test campaign are: (i) characterisation of thruster performances and comparison with xenon as a benchmark; (ii) assessment of the erosion evolution of the channel walls; (iii) validation of a reduced order performance and erosion model; (iv) extrapolation of the effect of alternative propellants on lifetime and EOL performance; (v) assessment of system level implications related to the use of alternative propellants.

The HT-5k thruster unit showed a stable operation with the selected alternative propellants over a wide range of discharge voltages (250-600V) and powers (2-7 kW). The thruster was capable to reach high thrust efficiencies also with pure krypton. In general, with the transition from pure xenon to pure krypton the maximum of the thrust efficiency showed a shift towards higher power levels (4000-4500W for pure Xe; ~6500W for pure Kr). The thruster showed a stable discharge current trend with no issues of flame-out or overheating. Plume measurements indicated that beam divergence depends on the amount of krypton in the mixture: the higher the percentage of krypton, the larger the beam divergence. As expected, pure Kr and Kr blends showed to increase significantly the initial erosion rate of the ceramic channel. 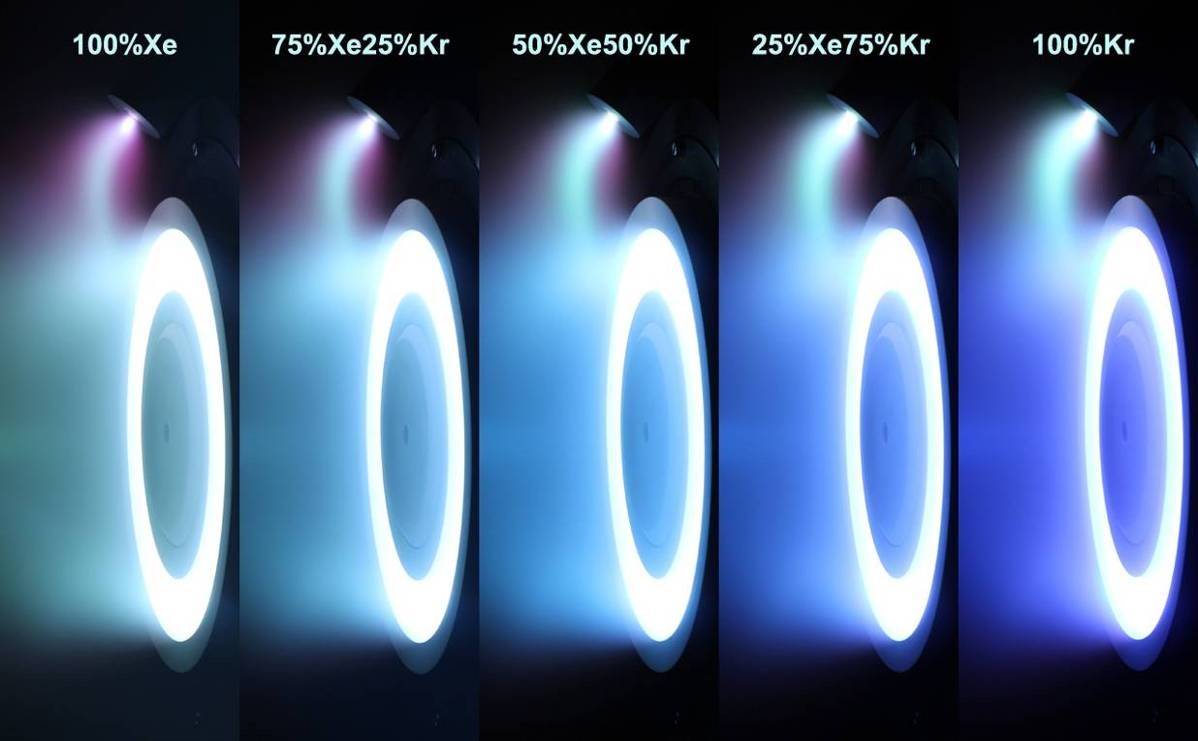 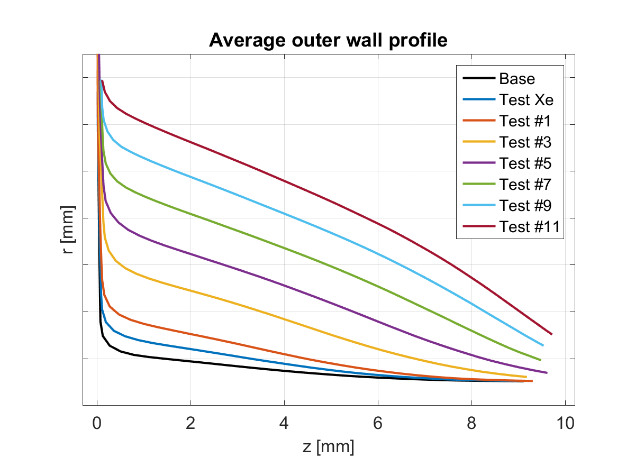 Not the answer you're looking for? Browse other questions tagged spacex engine-design ion-thruster performance starlink or ask your own question.

9
Using water as a high density storable hydro-lox propellant
20
Why will Starlink satellites use krypton instead of xenon for electric propulsion?
4
What could go wrong if someone overpowered an ion engine?
6
How much of the world's xenon has been used in spaceflight altogether? Is it a lot? Did it cost a lot?
8
How will Starlink satellites deploy from the fairing and reach their orbits?
2
Space Debris and Megaconstellations: plans for ~1000kms altitude orbits
3
Why might krypton have a lower utilization fraction than xenon for ion propulsion, and what can be done to improve it?
0
How much krypton do Starlink satellites carry when they are first deployed?

2
How does Accion System's TILE propulsion module compare to an equivalently sized Hall effect or an Ion thruster?
20
Why will Starlink satellites use krypton instead of xenon for electric propulsion?
3
What are Starlink's available momentum unloading strategies?
4
How quickly can the Starlink spacecraft respond to an impending collision?
3
What are the advantages of solid iodine propellant and how is it used for ion propulsion?
10
How much krypton is stored on a Starlink satellite?
6
How much of the world's xenon has been used in spaceflight altogether? Is it a lot? Did it cost a lot?
3
Estimating thrust and kg fuel for a generation ship's journey to Alpha Centauri