Could a chemically propelled craft travel directly between Earth and Mars spaceports?

If in the near future we manage to build out some infrastructure in space--including robotic asteroid mining so that we can get water without pushing it up a gravity well--are LOX/LH2 rockets powerful enough that we could travel directly between spaceports on Earth and Mars without using Hohmann transfers?

How long would it take this ship to reach the Mars spaceport from the Terran spaceport?

(I am a writer working on a novel; yes I love the Expanse, but I want to write in a more near-term future. Thanks for any help!)

engine-design time-of-flight
Share
Improve this question
edited May 17 '19 at 21:42

For hydrogen-oxygen chemical propulsion, you can get on a trajectory that's about three times faster than a Hohmann transfer, but not so much faster that it really changes the game.

The delta-v available to you is given by the Tsiolkovsky rocket equation:

Where $v_e$ is the exhaust velocity aka specific impulse of the engines (about 4500 m/s for hydrogen/oxygen), $m_0$ is the fully fueled mass of the rocket, $m_f$ is the dry mass remaining after expending all the propellant, and $\ln$ is the natural logarithm function.

Getting the mass ratio as high as possible is the way to maximize delta-v for a given engine chemistry, and ratios around 10:1 are achievable if you aren't carrying much payload. The shuttle's SLWT external tank had a 28:1 mass ratio, but that didn't include any engines, payload, or other equipment; that seems like an upper limit for mass ratio for near future designs, so let's say your spacecraft has a 20:1 mass ratio.

Plugging that mass ratio into the equation, you get around 13,480m/s of ∆v.

NASA's trajectory browser lacks some imagination, and won't give any results that require more than 10km/s of delta-v, but it does offer a 9.86 km/s, 80-day flight to Mars that looks like this: 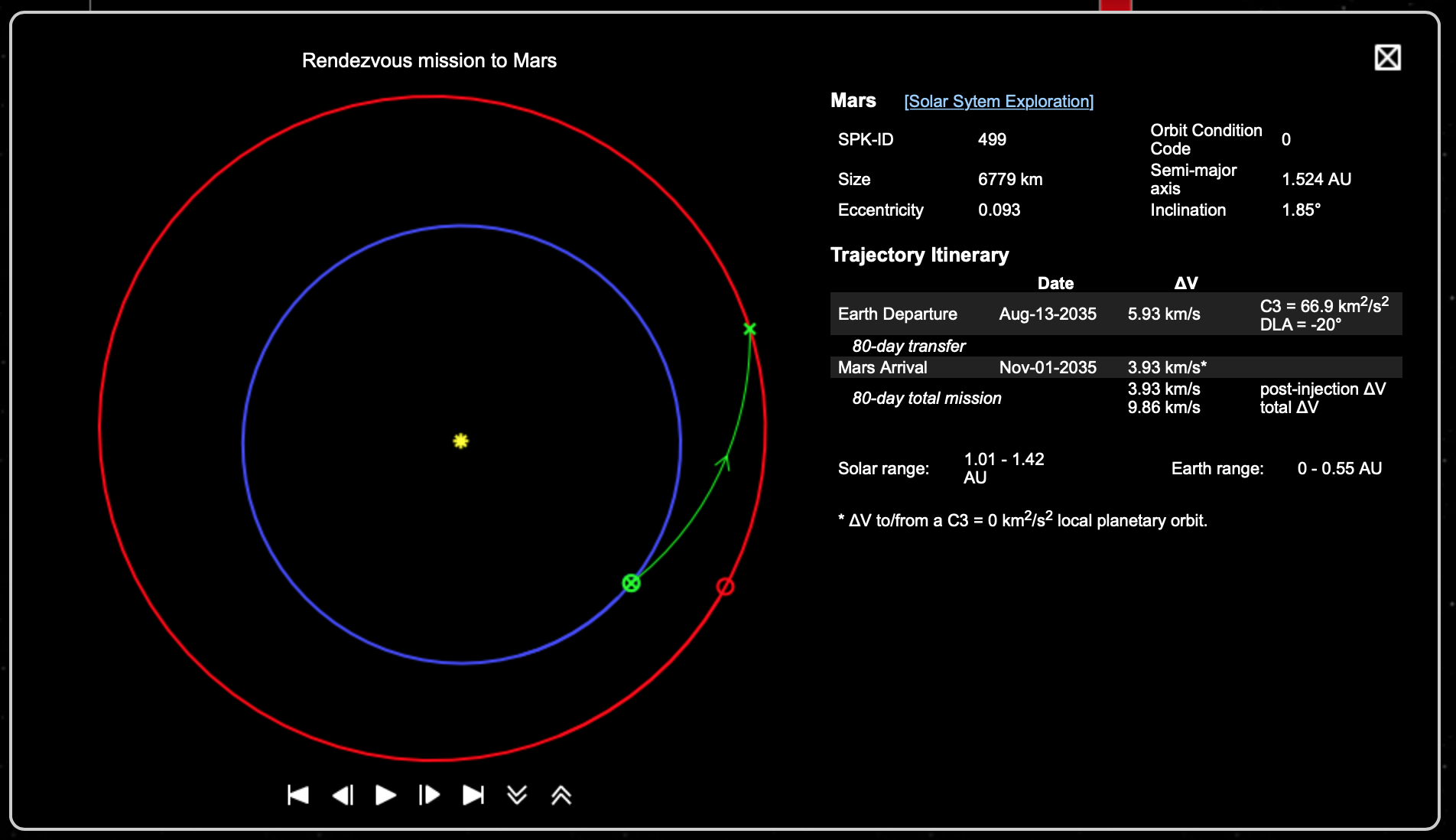 With the additional 3km/s you have available, and some very hand-wavey back-of-the-envelope math, I think you might be able to knock another 10 days off the flight: 70 days.

This is in contrast to 208 days for the minimum-delta-v Hohmann to Mars in the second half of 2035, using less than half as much ∆v: 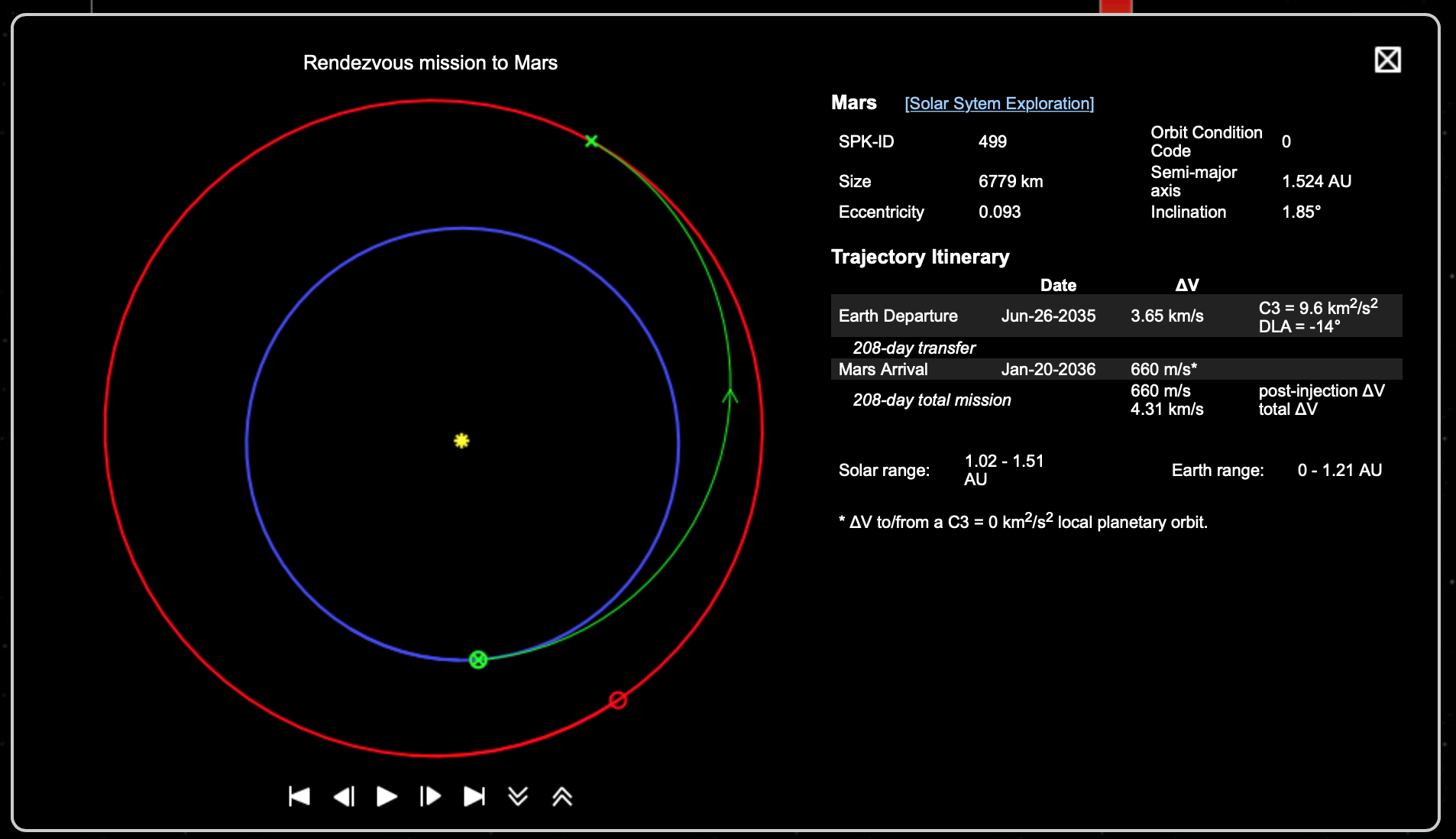 The trans-Mars injection burn, and the rendezvous burn at Mars, would not cover very much of the total flight time; like a basic Hohmann, you spend almost the entire flight coasting in zero-g. Assuming an average acceleration of 1g, the 6km/s injection is done in ~10 minutes.

Note that the mass of the spaceship drops continuously as propellant is used, so acceleration increases over the course of each burn; you'll either want a much lower average acceleration and longer burns (less efficient because of the Oberth effect, but a tradeoff against carrying less mass in engines), or you'll want to throttle back engines (or shut down some of the engines in a cluster) toward the end of the arrival burn for crew comfort.

This analysis is assuming a one-way trip; all the fuel is used up by the time you're in Mars orbit, and you'll need to refuel before you come back. Another issue is keeping cryogenic hydrogen fuel from boiling off over the flight, since you're going to need it to slow down at Mars arrival. Both these problems could be mitigated a bit by using methane instead of hydrogen -- easier to produce on Mars, and easier to keep liquid -- but methane-oxygen rocket engines have poorer specific impulse than hydrogen-oxygen.

You mentioned the micrometeoroid threat and "maximum safe travel velocity"; for the kind of speeds we're talking about, it almost doesn't matter how fast you go. Earth's orbital speed around the sun is around 30km/s. Any random bit of grit that's "part of the solar system" is statistically more likely than not to be orbiting in the same general direction, but could easily be moving nearly perpendicularly to Earth's path for a relative speed of ~40km/s, or retrograde for a relative speed of ~60km/s. With those possibilities, it doesn't much matter if your speed relative to Earth is 5km/s or 10km/s. Once your Earth-relative velocity is up around 100km/s, you're starting to measurably increase the hazard, but you simply can't get there on chemical rockets.

In order to get anything remotely like continuous 1g acceleration to the halfway point and continuous deceleration the rest of the way, you need much more fuel-efficient engines than we have at present. Our modern ion engines get an order of magnitude better exhaust velocity than hydrogen/oxygen, but several orders of magnitude less thrust-to-weight ratio; they won't give enough acceleration for the crew to notice. For really exciting speeds, accelerations, and transfer times, you're going to want a fusion rocket of some kind, which is going to be about 25-50 years away for the foreseeable future. Project Rho has a lot of resources for science fiction writers interested in possible future propulsion types.

Not the answer you're looking for? Browse other questions tagged engine-design time-of-flight or ask your own question.

12
Is the concept of the Epstein Drive based on actual theorized scientific research which is considered plausable?
2
Calculating total burn time for a rocket under constant acceleration with two propellant consumption rates