How were the Vega balloons deployed?

The Vega mission included balloon deployment into Venus' atmosphere. Deploying weather balloons on Earth is easy, but i imagine it is quite complicated in other planets' atmosphere from a spaceship.

The aerostat was stowed in a toroidal compartment fastened to the cap section of the spherical reentry vehicle, fitting around the lander's helical antenna. This included spherical bottles of compressed helium, and a 35 square-meter parachute used during the filling of the balloon. Deployment, diagrammed above, had to be planned carefully and controlled by barometric sensors. If the balloon was filled too early or too quickly, it would burst in the low pressure of high altitudes. If it was filled to slowly, the assembly would drift too far down and be destroyed by high temperatures. 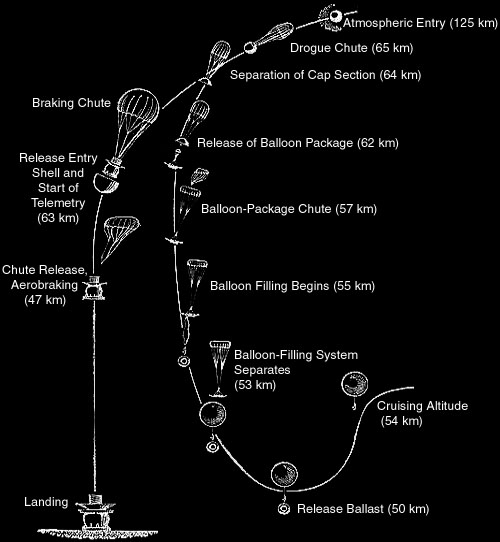 Not the answer you're looking for? Browse other questions tagged venus balloons or ask your own question.

11
Have there been any official feasability studies into descending balloons into outer planetary atmospheres?
1
What are the uses and limitations of moored (powered) balloons? (Compared to GEO, sounding rockets et c.)
15
Is it more challenging to put an airship in the Uranian than in the Venusian atmosphere?
11
Did Echo 2 remain spherical without requiring gas pressure? If so, how is this known to be true?
4
Do space agencies (specifically NASA) face legal issues when flying scientific balloons?
18
What if a Space Shuttle entered the atmosphere of Venus?
5
How did the Venera Probes manage to safely descend to the surface of Venus?