What fraction of launches are classified?

Classified, as in, a government doesn't share the basic parameters of the launch, its purpose, and so on.

I vaguely remember this cropping up in a previous question, but I can't easily find the numbers for this. Not much on Google, so it deserves a question. Any representative time frame would be good enough. For instance, "from 2000 to 2013 there were X launches and Y were classified".

This infographic should be a good representative of how many launches can be considered classified, so I'm reposting it here from the Collection of space exploration related infographics thread on our Space Exploration meta: 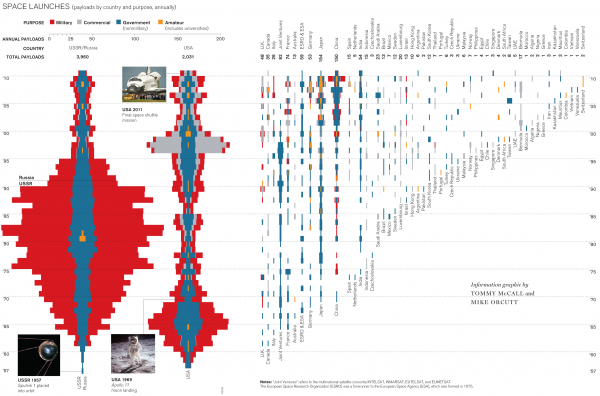 Of the 7,000 spacecraft that have been launched into orbit or beyond, more than half were defense satellites used for such purposes as communication, ­navigation, and imaging. (The Soviet Union sent up a huge number, partly because its satellites tended to be much shorter-lived than those from the United States.) In the 1970s, private companies began increasingly adding to the mix, ­launching satellites for telecommunications and broadcasting.

This graphic groups payloads by the nationality of the owner. A satellite, a capsule of cosmonauts, or a deep-space probe would each count as one payload. The data, which run through July 2011, were drawn from hundreds of sources, including space agency documents, academic journals, and interviews. They were compiled by Jonathan ­McDowell, an ­astrophysicist at the Harvard-­Smithsonian Center for Astrophysics and author of Jonathan’s Space Report, a newsletter that tracks launches.

Infographic collates data on space launches from 1959 through mid 2011 and was compiled by Jonathan ­McDowell, a Harvard-­Smithsonian Center ­astrophysicist, and it was designed by Mike Orcutt, a MIT Research Engineer and Tommy McCall, founder of Infographics.com, a data visualisation agency.

Why I think it's a good representative of how many space launches are classified? Because there's always going to be a debate over what constitutes a classified launch, so splitting these between military and nonmilitary government launches while including non-government launches in the numbers should provide a close enough overview, however we want to look at it. Some payloads might be only partially classified, but the point is, that with military launches, we simply don't know to what extent that is, while we can be fairly certain that with other government launches too many civilians are involved in projects to even be worth keeping any parts of them under wraps.

Please, feel welcome to adding your own favorite space exploration related infographics to our meta post where we're collecting them for easy reference. Thanks!

33
What is the total mass sent into orbit over all history?
11
Is it possible to covertly put an EMP weapon into an ISS-like orbit by masquerading it as a legitimate launch?
3
What sectors spend how much on space launches?

20
What are the end-of-life options for large classified satellites?
17
How are multiple launches handled?
5
Life support: fraction of launch weight?
13
Why are rocket launches so loud?
25
Does anyone who works at SpaceX know the paths of classified payloads?
4
Are westward launches more expensive than eastward launches?
8
If Country A's rocket hits an incorrectly declared satellite of Country B, which institution can arbitrate the dispute? Under which international law?
0
What is a "space launch delta", how many of them are there, and what fraction of them are assigned to Space Force?