Is there any footage of the rocket that launched Sputnik 1?

I am wondering if there is any visual documentation of the Sputnik launcher and/or launch, either video or photographs.

I found a photos, after searching around a bit. I haven't found any video yet. See Space.com for more. 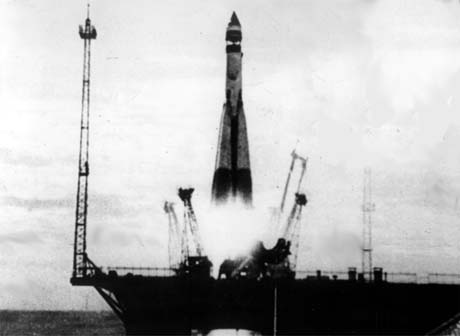 Yes, there are videos of the launch of Sputnik 1, there was no way that the Soviet propaganda machinery of those times would have missed the opportunity, and I've seen at least two separate sources, one filmed on a color camera, and another black & white from a slightly different angle.

From what's available online, sadly none are of quality we've become accustomed to, but they should do:

These footages appear to be legit copies of the launch of Sputnik 1 in 4 October 1957 from Site №1, a pad that is now part of the Baikonur Cosmodrome launch complex in Kazakhstan.

Another interesting thing about Sputnik 1 is how the news was reported in the western media, as seen for example in video of CBS special report. :/

Not the answer you're looking for? Browse other questions tagged launch artificial-satellite history sputnik or ask your own question.

16
What is different from the R-7 that launched Sputnik, to the Soyuz launcher used for Soyuz/Progress launches?
16
Sputnik: What took so long?
28
SpaceX CRS-5 Launch: What is the footage that appears to contain bubbles?
4
What scientific and technological advances were prompted directly by Sputnik 1?
8
Are there any events planned to celebrate Sputnik's 60th anniversary today?
17
Why were the Sputniks launched to such high apogee?
8
Have there been any probes launched that were actually clusters of probes?
35
Did Sputnik 1 tell us more than "beep"? What science was improved by information gained from its orbiting the Earth?