How does Deep Space Network's DSS-14 transmit radar and receive it at (almost) the same time? (monostatic radar)

@Hobbes' concise yet thorough answer to the question What are monostatic radar observations, and how will Deep Space Network's DSS-13 be used to observe asteroid 1999 WK4's flyby of Earth? tells us that NASA's Deep Space Network's DSS-14 dish is capable of both transmitting powerful radar signals and receiving the extremely weak reflections from objects in deep space.

This is called monostatic radar.

This radar is a little different than the kind of radar used to detect speeding cars, aircraft, or ships.

The delay-doppler signal may be used to generate images of 1999 WK4 and it's little orbiting moonlet, so it may have some special coding that is sent in a long stream such that the received signal will be pretty complicated. It's not just a "ping!"

Question: How exactly does Deep Space Network's DSS-14 implement monostatic radar for the study of asteroids in deep and cis-lunar space?

The NBC News article Mile-wide asteroid and its tiny moon to zoom past Earth this weekend; Dubbed 1999 KW4, the "binary" space rock will skim past our planet harmlessly at a distance of 3 million miles. shows the animated GIF below, and links to the Asteroid Tracker page 1999 KW4.

Due to the large antenna to target distances, involving round - trip light times of up to several hours, duplexing in this radar system has been achieved until recently by positioning the antenna sub - reflector to focus either on the transmit or receive feedhorn

(in other words, they could transmit a signal, and re-focus the antenna so that the received echoes would come in to the receive feedhorn, and this was a slow process, but that was okay because the echoes would take minutes or hours to arrive), but

Recent emphasis on the observation of near - Earth asteroids, with round - trip light times as short as 30 seconds present a difficulty in that the antenna sub - reflector requires approximately that amount of time to be re - positioned from the transmit to the receive position. Additionally, this causes a great deal of mechanical wear on the positioning mechanism of the 9 meter diameter, 3600 kg sub - reflector due to the high number of transmit / receive cycles that maybe performed while a near - Earth asteroid is visible in the sky.

and that the QOS allows "switch times in the order of one second, allowing radar imaging of asteroids inside a Lunar orbit".

Unfortunately the visibility of the diagrams in the scanned paper is poor, and the explanation in the text is minimal, but it seems apparent to me that the switching is accomplished by means of a set of radio "mirrors" that are moved into the signal path during receive, to move the focus point to the receive feedhorn, and moved out of the path during transmit.

We will have to observe bistatically with DSS-13, because the quasi-optical switch at DSS-14 has been removed for repairs.

which confirms the necessity of the QOS for monostatic imaging of nearby objects.

with these static image and this animated GIF (it runs about ten times then stops, you have to reload the page to restart the GIF

There is also this 23 second long Quasi-Optical Switch Movie (8 MB MOV file) with sound and "commentary".

Here are two static images with the optical switch in one position and the other. It's basically two mirrors in a periscope or dogleg configuration. When in place it offsets the optical path to one feed horn, and when "pulled back out of the way" the optical path continues to the on-axis feed horn. 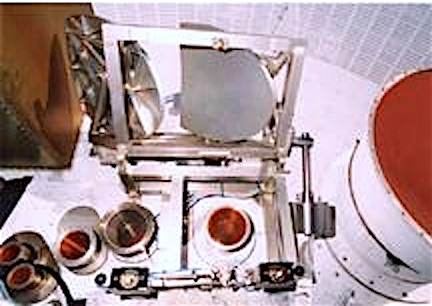 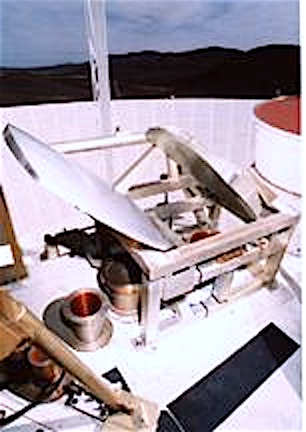 and this drawing from the linked paper in @hobbs' answer: Perez and Bhanji (1997) A Quasi-Optical Transmit/Receive Switch for the Goldstone Solar System Radar (pdf: 1, 2) 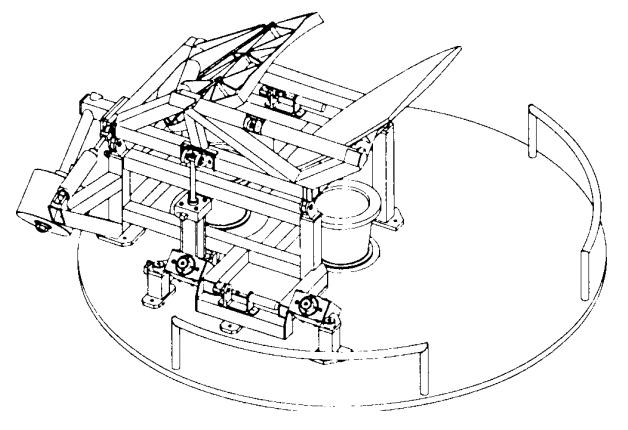 Not the answer you're looking for? Browse other questions tagged deep-space-network antenna electronics radar delay-doppler or ask your own question.

4
Tradeoffs between using two 34 m and one 70 m Deep Space Network dish?
0
What are monostatic radar observations, and how will Deep Space Network's DSS-13 be used to observe asteroid 1999 WK4's flyby of Earth?

5
Why does DSN sometimes uses two dishes at the same time to receive Voyager-1?
12
Why was the 100m Green Bank dish needed together with DSN's 70m Goldstone dish to detect Chandrayaan-1 in lunar orbit?
4
Is delay-doppler radar imaging of NEO asteroids possible only if it spins fast enough?
6
How does a three-way doppler shift measurement work?
0
What are monostatic radar observations, and how will Deep Space Network's DSS-13 be used to observe asteroid 1999 WK4's flyby of Earth?
6
Does NASA's Deep Space Network sometimes listen to other space agencies' spacecraft "just for the heck of it" or other non-mission related reasons?
27
How will the closure of the Arecibo dish impact deep space communications?
7
Why are modern satellite ground station and deep space communications dishes with secondary mirrors almost always Cassegrain?