What spacecraft part is Mike Pence touching in this photo?

In this photograph, Vice President Mike Pence is touching an item labelled "Critical Space Flight Hardware". What is it? Has the photo been doctored? 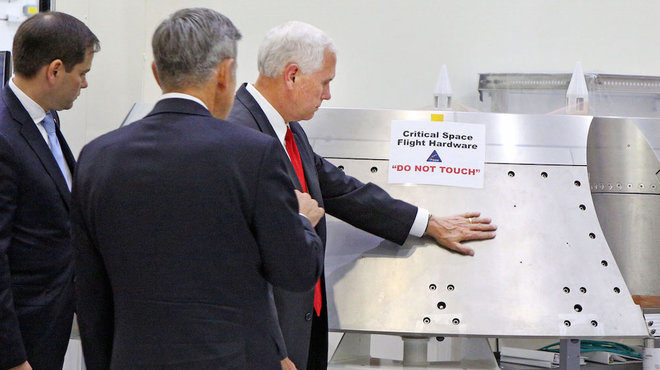 The photo is legit, according to Time, Washington Post, NBC News, The Guardian, etc.

During a visit to NASA’s Kennedy Space Center in Florida on Thursday, Vice President Pence solemnly reached out and touched the Orion spacecraft's titanium forward bay cover, placing his full palm just below a sign that read: “Critical Space Flight Hardware 'DO NOT TOUCH.' "

The manufacturer has an article which discusses the forward bay cover in some detail.

Parachutes aren’t built to withstand the 5,000-degree temperatures upon re-entry – they would be too heavy and unable to generate enough drag to slow the spacecraft down – so the forward bay cover protects them until just the right moment.

11
What is this instrument on the ISS?
11
What is under these four white covers on the upper part of the Orion capsule?
26
In this iconic lunar orbit rendezvous photo of John Houbolt, why do arrows #5 and #6 point the "wrong" way?
5
Help understanding this Apollo 11 docking probe image, what are we looking at, and from where?
3
Does this image of 91-core OTRAG "asparagus-staging" show a real launch, or is it "space-art"?
4
What's the puffy fabric-like material around the upper stage at launch of Ranger 5?
11
Can you help me identify this vehicle outside the VAB?
2
What mission is this Chris Hadfield photo associated with and what is the location? And what is that thing?
7
What is this thing on the right of the frame in this photograph? (STS-71)