Today's Teslarati article SpaceX wants to offer Starlink internet to consumers after just six launches talks about the new website https://www.starlink.com/ shows several images from it, and tries to describe some of the bits on the Starlink spaceraft itself. 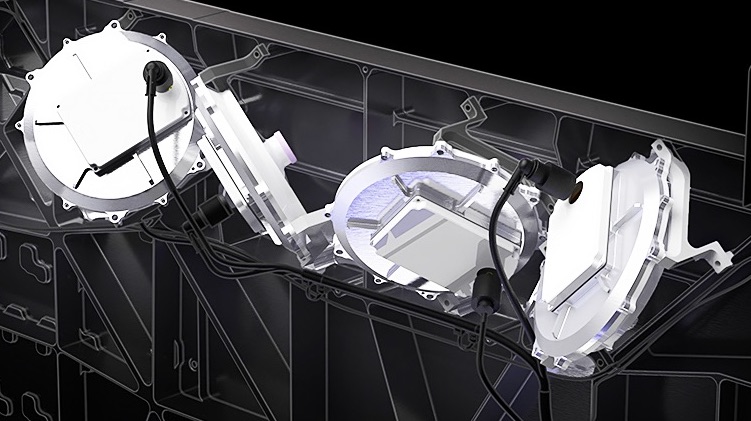 Caption for full image, shown is a cropped section.

Starlink’s star trackers (left; used for precise pointing and positioning) and what are likely four gyros, also used for pointing and orientation. (SpaceX)

I don't think the satellites have cold gas thrusters, but there is one Hall effect ion thruster for orbital maneuvers (e.g. raising, lowering, phasing, station-keeping).

Question: What are the strategies that are available to the Starlink satellites for momentum-unloading of the control gyros?

Not the answer you're looking for? Browse other questions tagged spacex attitude-determination-and-control starlink gyroscope or ask your own question.

5
How quickly can the Starlink spacecraft respond to an impending collision?
1
How much krypton do Starlink satellites carry when they are first deployed?

8
What are damper booms, and how do they facilitate triaxial stabilization?
6
What type of Kalman filters are preferred for satellite ADCS systems; what are the tradeoffs?
1
How are satellites made "demisable" and what else do recent FAA documents tell us about SpaceX's plans for StarLink satellites?
3
What performance specification would be lower for Krypton than for Xenon in Hall effect thrusters?
5
What are these four "debris" objects along with the Starlink satellites?
5
What are the bottlenecks stopping SpaceX from launching more frequent batches of Starlink?
4
What are the orbits of all Starlink satellites launched?
3
Are the (relatively) new "all electric" satellite buses like the Boeing 702SP really all-electric? Are RCS and momentum unloading done with ions?