Just a general question: In regards to the Deep Space Network antennas, how does power from the transmitter of the antenna relate to the frequency used? I believe the antennas use X band frequency for uplink and downlink to communicate with the Voyager spacecrafts, but is there a limit of the power needed to reach that frequency?

When looking for technical information about spacecraft communications and other tech stuff, think DESCANSO. What is that? I'm glad you asked! When was the idea behind the DESCANSO Book Series first conceived, by whom, and what is it's “mission”?

In Volume 13, Deep Space Communications, Jim Taylor, Editor in Table 2.2 on page 34, you can see that the transmit power available for both the 34 meter dishes (BWG = "beam waveguide antenna") and the 70 meter dishes and for both S-band and X-band are all 20 kW.

However, the EIRP (Effective Isotropic Radiated Power) is different in each case because the gain of the antenna varies with the ratio of the diameter to the wavelength squared. So 70 m will have about +6.3 dB over 34 meters, and X-band will have +10.6 dB over S-band.

The 400 kW for the 70 meter dish at Goldstone is an exception that is rarely if ever used Has DSS-43 ever been used in high power mode (>>20 kW) for an emergency situation and the Ka-band is not used for deep space, though it is used in some cases... 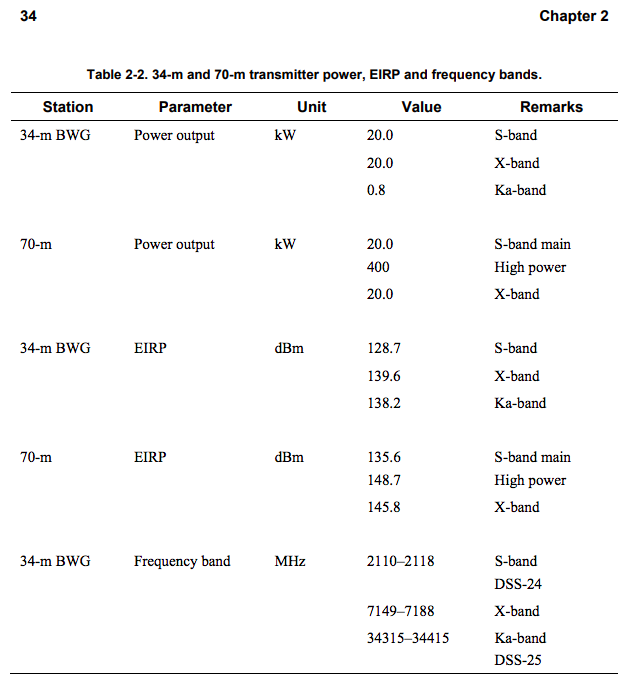 Not the answer you're looking for? Browse other questions tagged deep-space-network or ask your own question.

22
Why was Canberra able to listen to Voyager 2 but not talk to it?
12
Has DSS-43 ever been used in high power mode (>>20 kW) for an emergency situation?
5
Why does NASA use higher frequencies even though they have worse Free Space Path Loss (FSPL)?
4
Tradeoffs between using two 34 m and one 70 m Deep Space Network dish?
1
What is the highest non-optical frequency used or tested for use in deep space communication?
2
Will there be “Near Space” Ka-band allocations for TESS?
1
When was the idea behind the DESCANSO Book Series first conceived, by whom, and what is its “mission”?
1
Will future deep space optical communications “ground stations” actually be in space, or on the ground?

8
How many space-craft can a station on the DSN communicate with concurrently?
12
Has DSS-43 ever been used in high power mode (>>20 kW) for an emergency situation?
1
What is the highest non-optical frequency used or tested for use in deep space communication?
2
Power and frequency units used in Deep Space Network XML data?
2
How many hours each day is Mars reachable by 2 of the 3 DSN complexes?
1
Will future deep space optical communications “ground stations” actually be in space, or on the ground?
3
What is a Beam Waveguide dish and why do deep space communications stations use them?