Why does LRO's laser altimeter telescopes use lenses instead of mirrors?

From Space.com's NASA's Piggyback Experiment on Israeli Moon Lander Could Aid Future Lunar Touchdowns shows an image of the laser altimeter on the LRO. It looks like the "transmit" and "receive" telescopes are both based on lenses rather than mirrors.

I think that this is pretty atypical for space-based telescopes. 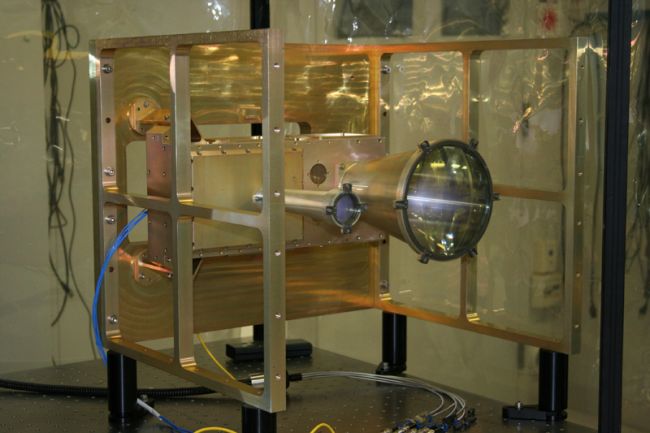 tl;dr: The 125 mm proven receiving telescope design used on the receiving telescope of the MLA laser ranger used on MESSENGER was adapted and enlarged to 150 mm for the LOLA of LRO. I am guessing that this was felt far more prudent than a new design using reflective optics based on exotic materials like silicon carbide.

This page on LOLA links to

and that paper references the Mercury Laser Altimeter or MLA:

...was used on the 2004 MESSENGER mission to Mercury. The design was developed to handle large thermal swings and also large thermal gradients within the spacecraft and within the telescope itself.

It used four telescopes in parallel, each with 125 mm (five inch) objective lenses to collect the weak scattered photons from the planets surface and image them on to silicon avalanche photodiodes (SiAPDs) for timing analysis.

The four MLA Receiver Telescopes have a combined aperture of 417 cm2 and a 400rad-diameter nominal FOV. The collecting area is equivalent to a single 0.25m-diameter telescope with a 15% secondary and spider obscuration factor. The original MLA receiver concept was based on a scaled-down version of the beryllium Cassegrain telescopes used on MOLA (0.5 m in diameter) and GLAS (1.0 m in diameter), but once the MESSENGER thermal environment was better understood it became apparent that this telescope would not meet the MLA on-orbit performance requirements. Although the MOLA and GLAS telescopes are athermal (to first order) under a bulk temperature change, they are very sensitive to axial and radial thermal gradients because of the high coefficient of thermal expansion (CTE) of beryllium and the large longitudinal magnification and fast primary of the Cassegrain telescope design.8 The multiaperture, refractive MLA Receiver Telescope design is not athermal, but this optical design can handle thermal gradients an order of magnitude larger than an equivalent beryllium Cassegrain telescope for a comparable amount of image degradation. The MLA Receiver Telescope operating thermal range is 20 25ºC, and the survival thermal range is 30 to 60 ºC. The optical layout of the MLA Receiver Telescope is in Fig. 3. The telescope is a four-element reverse telephoto design with a 500mm focal length, a 300mm unfolded path length, and a final speed of f4.35. The plano–convex objective lens is made of sapphire and has a focal length of 311.2 mm, a diameter of 125 mm, and a mounted clear aperture diameter of 115 mm. Sapphire was selected for all the optics exposed to the Mercury environment for its ability to withstand thermal shocks,9 its lower absorption in the IR compared with optical glasses, and its resistance to radiation darkening. Although sapphire is birefringent and can generate double images, its imaging performance is adequate for the MLA receiver photon bucket. Ten high-purity, synthetic sapphire blanks are manufactured by Crystal Systems, and the blanks are ground and polished into lenses by Meller Optics. A negative focal-length triplet lens group increases the focal length of the objective lens and corrects spherical aberration and coma. The triplet is manufactured out of radiation-resistant Schott BK7G18 glass by Optimax Systems. The telescope is folded to fit within the allocated MLA volume, which also helps reduce the cantilevered mass. The dielectric fold mirror reflects only a small spectral band centered at 1064 nm, which provides protection against an accidental view of the Sun since most of the visible solar radiation goes through the fold mirror and scatters off its frosted backside onto the MESSENGER instrument deck.

The system was extensively modeled and tested for the thermal performance. The paper describes this in detail, here is a small sample:

The Receiver Telescope optothermal model accounted for both changes to the objective lens shape and index of refraction and mechanical deformations of the beryllium telescope tube. The thermal analysis was performed by Harvard Thermal Inc. based on the calculated absorbed IR flux from the TracePro Mercury MLA model. The thermal analysis showed that the Receiver Telescope develops the expected 30 ºC axial gradient plus a 10 ºC radial gradient (Fig. 6). The perturbed optical system is then ray traced with OSLO to calculate the effects on image size and location: The image defocused as expected, but the telescope line-of-sight change was only 15 rad, which is small enough to be neglected. 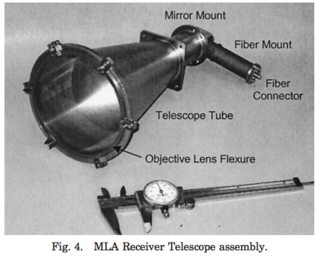 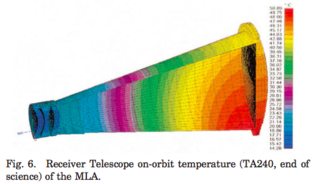 The proven design was adapted for LOLA

I am speculating that rather than develop a reflective optics system based on a new material like silicon carbide for low-thermal-expansion optics and mechanics, the designers opted for a small modification of a proven, well-characterized design.

Not the answer you're looking for? Browse other questions tagged the-moon laser instrument lro or ask your own question.

8
Why does lunar gravity decrease?
4
Can't we use laser transmitters instead of large radio dishes on deep space probes?
2
Does any satellite communicate only through laser?
9
Why was the 100m Green Bank dish needed together with DSN's 70m Goldstone dish to detect Chandrayaan-1 in lunar orbit?
2
Why does the SEIS require a bellows type wind cover?
14
Could we use a narrow paradigm, say laser, to get info faster from New Horizons? (With a moon base.)
7
Do the latest Starlink satellites use inter-satellite laser communications?