Where did the Herschel Space Telescope go in 2013?

The article also includes an animated GIF of Herschel's orbit with the caption:

According to the animation's page the GIF is an:

Herschel's orbit around Sun-Earth L2 as shown in the GIF looks exactly like what one would call a Halo orbit. According to this answer to What is the difference between halo orbits and Lissajous orbits? a Halo orbit is a sub-class of Lissajous orbit where the in-plane and out-of-plane periods are in a 1:1 ratio.

But in the last frame of the GIF suggests something changed in 2013. 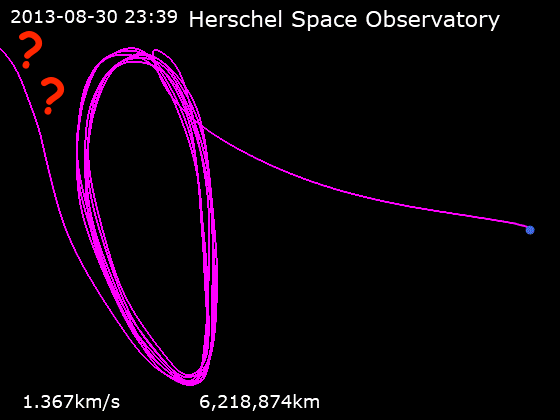 Rather than the circa 1.5 million km from Earth of a Sun-Earth Lagrange point halo orbit, the last frame shows a distance of about 6.2 million kilometers; four times farther from Earth than the halo orbit!

This then leads to the Questions:

On 29 April 2013, ESA announced that Herschel's supply of liquid helium, used to cool the instruments and detectors on board, had been depleted, thus ending its mission. At the time of the announcement, Herschel was approximately 1.5 million km from Earth. Because Herschel's orbit at the L2 point is unstable, ESA wanted to guide the craft on a known trajectory. ESA managers considered two options:

The managers chose the first option because it was less costly.

They have a nifty animated gif of the orbit (sorry, no embed through Imgur or SE)

16
Could JWST stay at L2 "forever"?
11
Why did the Herschel Space Telescope need helium coolant?
7
What is the required burn to keep a satellite at a Lagrangian point?
9
What is the difference between halo orbits and Lissajous orbits?
5
What's the largest optical telescope mirror ever put in space?

17
Are some Halo Orbits actually Stable? (stable orbits about unstable Lagrange points)
9
Why was Kepler's orbit chosen to continue to drift away from Earth?
5
RIP Kepler, how shall we call your orbit? Does this cyclic flip-flop process have a name?
11
Why did the Herschel Space Telescope need helium coolant?
5
Why put X-ray telescope Spektr-RG/eROSITA all the way out at Sun-Earth L2?
8
Why shouldn't we illustrate spacecraft trajectories on top of static zero velocity pseudo-potential surfaces?
6
Why put SunRISE in the graveyard? Why will it "fly slightly above geosynchronous orbit"?
7
How can Artemis 1 take so much longer for Earth-Lunar transit than the Apollo missions did?