Why can’t cryogenic propellants be storable, at least on the ground, via refrigeration?

Cryogenic fuels (liquid hydrogen, liquid methane)1 and oxidisers (liquid oxygen)2 are the rocket propellants of choice where raw performance is the overriding concern, due to the very high performance (by chemical-rocket standards) produced by rocket engines burning cryogenic propellants. However, they come with the disadvantage that, having boiling points well below room temperature (or Space Coast outdoor temperature, or, for that matter, even Plesetsk-in-winter temperature), they start to evaporate as soon as the rocket is fueled; to keep the tanks from bursting from the accumulation of gas produced thereby, the boiled-off propellant is vented through relief valves, and, thereby, lost to the rocket. Insulating the rocket helps somewhat, especially for liquid hydrogen, which has the lowest boiling point of all cryogenic propellants (hence the ubiquitous orange foam insulation seen on essentially all hydrolox rockets and rocket stages), but the boiloff eventually occurs even with insulated tanks.

As a result, cryogenic rockets are best launched as soon as they’re fully fueled (in order to minimise the amount of propellant that boils off before launch), and cryogenic upper stages generally aren’t good for more than a week or so, tops, in space, before enough of the propellant has boiled off to drop the stage’s Δv budget below that of an upper stage using so-called “storable” propellants3 (or, in some cases, a solid-fuel motor).

On the other hand, it is obviously possible to chill liquid hydrogen and methane and oxygen to well below their boiling points (as evidenced by the fact that you have the cryogenic propellants available in liquid form to put in the rocket in the first place), via one or more refrigeration methods. If one could somehow keep the propellants refrigerated to sub-boiling temperatures even once they’ve been loaded into the rocket, it would be possible to greatly reduce, or even completely eliminate, the problem of propellant boiloff.4 This shouldn’t be too hard for first stages, where, after fueling, the only sitting around they do is on the pad; the fuel and oxidiser tanks could simply be plumbed into fixed refrigeration plants via a couple more umbilicals, with valves being closed to isolate the tanks from the ground infrastructure as part of the ignition sequence, and the umbilicals then separating at liftoff: 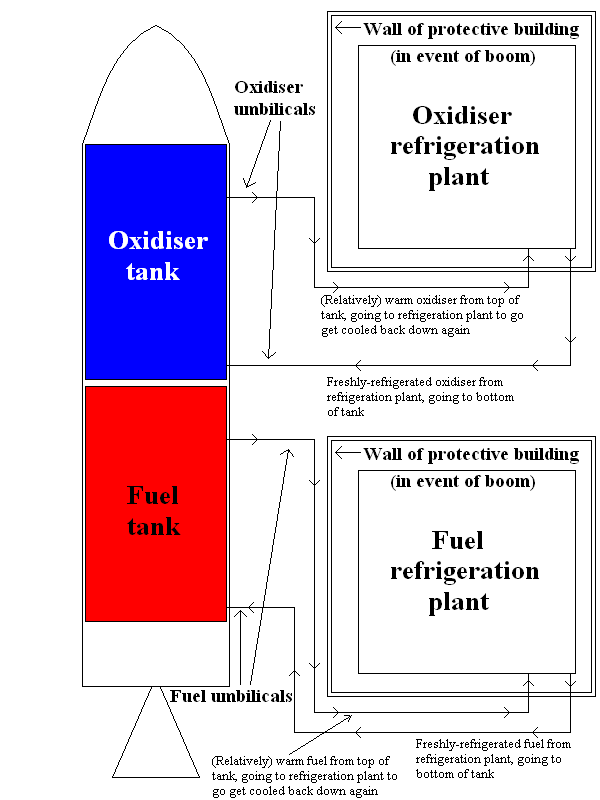 This would be harder for upper stages, as, in order to keep their propellants refrigerated until it came time to use them, they would have to carry (potentially-heavy) refrigeration equipment with them (although this could potentially be mitigated to some degree by jettisoning the refrigerators prior to the stage’s final burn, when they’d no longer be needed); where refrigerated propellants would really come into their own in space would be for an orbiting cryogenic propellant depot, as the refrigeration machinery could (again) stay on the piece of infrastructure that isn’t going anywhere (here, the propellant depot), with client spacecraft reaping the benefits of stored cryogenic propellants without having to pay the weight penalties of refrigeration equipment. Admittedly, refrigeration does require an external source of energy, but solar energy is essentially free for an orbiting spacecraft, with rechargeable batteries to cover the periods of shadow time.

1: Liquid ethane, ethylene, and propane are also cryogenic (although nowhere near as deeply so as liquid methane), but, to the best of my knowledge, have not actually been used in any mass-produced rocket engines.

2: Liquid fluorine is also cryogenic, and is actually a somewhat-better-performance oxidiser than liquid oxygen, but is somewhat more expensive and difficult to handle, results in engines with more spectacular failure modes, and can only realistically be used as an upper-stage oxidiser (due to the vast amounts of hydrogen fluoride it produces with all common rocket fuels); for these reasons, it is not generally used as a rocket propellant nowadays.

3: In practice, this generally means room-temperature hypergolic propellants - generally hydrazine and/or one or more of its derivatives (for the fuel) and dinitrogen tetroxide (for the oxidiser).

4: As well as the related problem of thermal expansion of chilled liquid propellants; all liquid rocket propellants (even those that are liquid all the way up to, and past, room temperature, like RP-1) expand with increasing temperature, which has led some rocket surgeons to chill these propellants almost to their freezing points in order to densify them and let more propellant be packed into the tanks. If the rocket then has to sit around on the pad absorbing heat, the propellants warm back up and expand, and some quantity thereof has to be drawn from the tanks to keep them from bursting, negating the performance advantage of chilled propellants.

I performed a feasibility study for a Soyuz launch site on Christmas Island many years ago in support of the Asian Pacific Space Center. One of their press releases talking about the project is here: https://www.aerospace-technology.com/projects/christmas/

As part of that investigation I discussed the feasibility of adding enough refrigeration capacity to prevent boil off with the contractor (BRPH Construction who installed a fair amount of the Kodiak Island launch facility) who was preparing a bid for me and was told that it was a bad idea from a couple of aspects. First, the cost of producing and storing the refrigerated products is minimal if one can produce just what you need, just before you need it, just based on a pure energy use basis. Second, prior customers had questioned how to maintain purity of propellants if they were kept refrigerated below the boil off temperature, particularly the LOX which was cold enough that it would have a habit of condensing LN2 from the atmosphere if there was any leak, thereby diluting itself. It turns out to be overall cheaper to guarantee delivery of high purity LOX if one is constantly boiling it off at a low level to ensure nitrogen doesn't get back into the cryogenic storage.

Cryogenic propellants can be stored as liquid without boil-off, as long as the vapor pressure at the storage temperature is within the safe working limits of the containment vessel. The relationship between temperature and vapor pressure is given by the compound’s phase diagram. Here are diagrams for oxygen and methane. The graphs are jogged sideways so the temperature axes align. 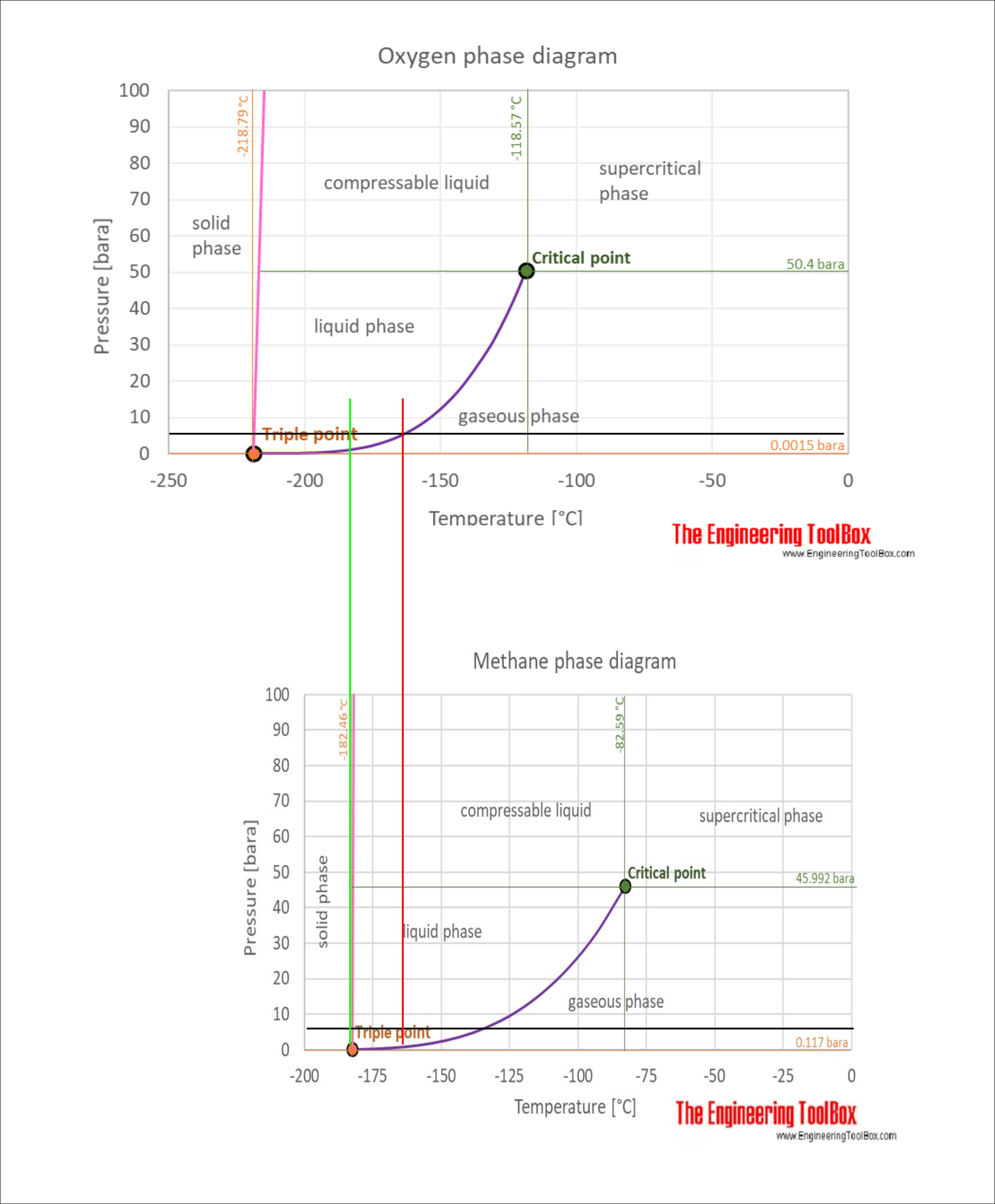 The green and red lines show the temperature limits where both are liquid. Note there is no use speaking of a “boiling point” without specifying the pressure. The boiling point of oxygen at atmospheric pressure is -183 °C, but at Starship tank pressure (6 bar) is -170 °C.

Say you want to hold liquid $O_2$ at -170 °C / 6bar. You fill your tank and subcool it to -183 °C just for good measure. No matter how good your insulation, if the tank is on Earth or LEO, it will warm up. The pressure in the head space will climb until it reaches 6 bar at -170 °C . The safety blow-off valve will now vent gaseous $O_2$ and the liquid $O_2$ will start to boil. The heat of vaporization ($6.82 \frac {kJ}{mol}$) will maintain liquid $O_2$ at -170 °C and pressure at 6 bar until the last drop of $O_2$ boils off. The boil-off becomes your refrigeration system for holding the tank at -170 °C. If you provide another refrigeration system to do the job, it will cost you a lot of energy and complexity. If you have the refrigeration plant handy, it makes more sense to top up the liquid $O_2$ as it boils off rather than pump tank contents in a loop to the plant and back to the tank.

A useful analogy is a pot boiling on the stove. The water heats until it gets to its vapor pressure at sea level (100 °C) and starts to boil. No matter how hot the element, water never gets hotter. As water boils off, you add cold tap water to keep the level up.

In LEO, it’s the same problem as on Earth. Because of IR radiated from the Earth (avg. temp 16 °C) and the Sun (avg. temp dang hot), the tank will try equilibrate to (very roughly) 6 °C. See this source. Active refrigeration would require enormous solar panels (which could shade your tank on the orbital day side: very elegant). Forget about battery storage for the orbital night side. Passive refrigeration using radiators could be used on the night side.

I suspect SpaceX will use "just in time" supply management along with reasonable passive efforts rather than refrigeration.

A Starship tanker in LEO could optimize its tank design for thermal storage, with a double wall “Thermos” design. It would be an interesting design exercise to choose SS304 wall thickness to share tank pressure on launch. The walls get their structural strength by being under tension. If there were no pressure differential across each layer, it would not contribute much to axial strength.

Not the answer you're looking for? Browse other questions tagged liquid-fuel design-alternative cryogenics fuel-system storage or ask your own question.

9
Why would sub-cooled LOX tanks need to "topped-off" until the last minute or so?
1
Could in situ (in-rocket) evaporative cooling/refrigeration be used for methane or hydrogen cryogenic propellants?

8
Autogenous pressurization with sub-cooled propellant
9
Propellant boil-off in zero G
4
Liquid propellant stored as solid
6
How will Robotic Refueling Mission-3's liquid methane tank remain full for six months without any boil off?
5
What methods are proposed for storing cryogenic fuels (esp. hydrogen) in space for months or years?
1
Could in situ (in-rocket) evaporative cooling/refrigeration be used for methane or hydrogen cryogenic propellants?
4
Why can't an expander-cycle engine be built to use RP-1 or other non-cryogenic fuels?
8
Has methylsilane (CH₆Si) ever been considered as fuel in rocketry?
3
Can the cryogenic expansion of liquid oxygen and liquid hydrogen be used to pump a rocket engine?
4
Starship: Methane and Oxygen can't both be liquid, except in a narrow temperature range. Is this a problem for interplanetary voyages?