Luna 15 - Any official confirmation of objectives?

It's widely considered a failed sample return mission, but did Russia ever officially announce that sample return was indeed the objective?

The Soviet space program was famously secretive, and the accepted explanation of failed sample return only seems to be a conclusion drawn from the objectives of later Luna landers - as far as I've seen.

Does anyone know if the Soviets ever published official statements or documents about the Luna 15 plan? Can we be certain it was a sample return mission?

Asif Siddiqi's "The Soviet Space Race With Apollo" mentions the Luna 15 mission here and there. The sample return vehicle was the Ye-8-5, based on the Ye-8 (aka Lunokhod) rover.

Siddiqi cites various articles from the early 1990s (e.g. "The 'Late' Lunar Soil", Novosti kosmonautiki 15, 1994, by Konstantin Lantratov), so I think the details probably became public -- if not formally published -- after the fall of the USSR. Novosti kosmonautiki's online archive only goes back to 2000, unfortunately, so I can't find the article (and I can't read Russian anyway.)

An interesting tidbit in Siddiqi's book is that a last minute 1-kg weight overage on the ascent stage of Luna 15 was resolved by removing a backup radio transmitter. Source: Soviet Space Programs 1966-1970 by Babakin, Banketov, and Smorkalov, and Babakin's biography by the same authors. 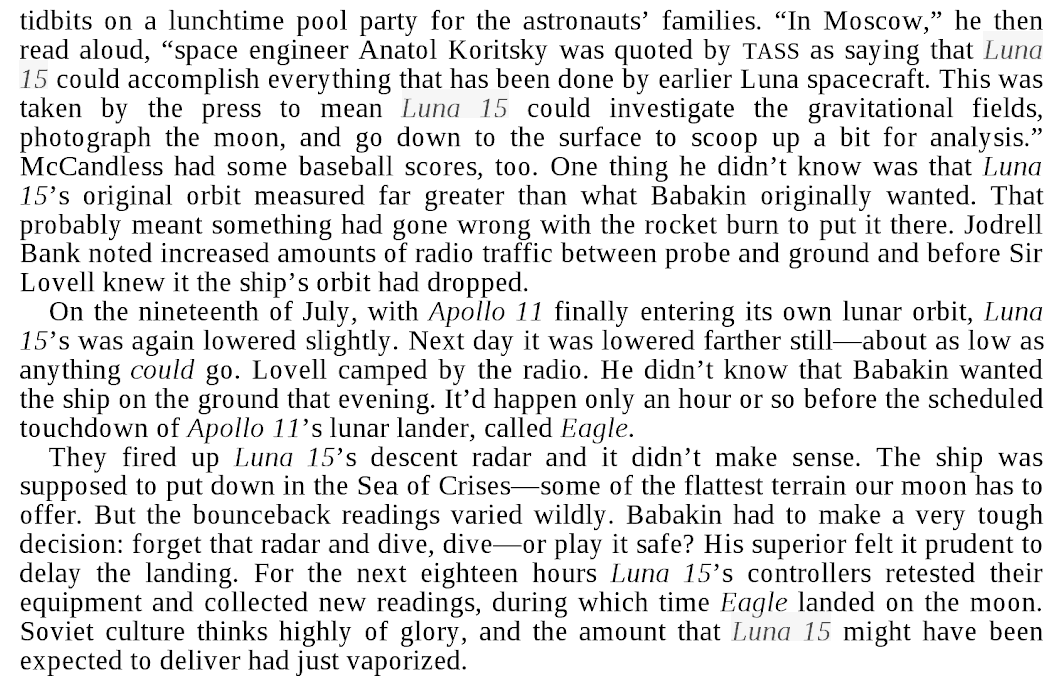 Not the answer you're looking for? Browse other questions tagged history russia apollo-11 soviet-union space-race or ask your own question.

26
Is there any advantage in launching spacecraft from a high latitude, or why was Plesetsk built so far north?
4
Is there any truth to the claims of cosmonauts lost in space?
23
Were the Apollo 11 astronauts aware of any parts of the Luna 15 mission?
19
Would Luna 15 have been visible to any of the members of the Apollo 11 crew?
12
Did Soviets/Russians perform any crewed (intentionally) suborbital flights?
8
How did the Luna spacecraft collect samples of the moon and containerize them for return to Earth?
5
Where in space did Luna 2 release its sodium?
1
How did Luna 3's pivoting antennas and ribbon antennas work?
7
Soviet Luna 16 Spacecraft