Reference to understand the notation of orbital charts

To address various orbital evolutions of spacecrafts, some particular orbital charts are taken into account. For example, the following is used to depict how a chaser reaches a target:

The only thing that I know about this notation is its frame definition, based on which +X is the horizontal axis toward left, and +Z is downward. But I have no idea about the rest, say, the curves, their size variations, those black squares, etc.

Does anyone know any reference in which the interpretation of this graphical notation is thoroughly discussed?

Since you are specifically asking for a reference, I'll refer you to the Appendices in History of Space Shuttle Rendezvous, where these topics are covered in some detail.

Appendix G describes the relative frame used in the diagram.

Appendix H describes the burn nomenclature (the squares in the picture are burns, and this appendix decodes their names). For example:

NSRn – Slow Rate maneuver places the chaser in a co-elliptic orbit with the target, aligning the lines of apsides of both vehicles. NSR burns can be used to meet lighting requirements on the day of rendezvous.

You can also look at this paper, which plows much of the same ground in less words (it's written by the same guy).

This picture (from the Shuttle Rendezvous Training Manual, sadly not online, although it's where your picture in the question came from originally) tries to show how the relative motion diagram syncs up with an orbital diagram. 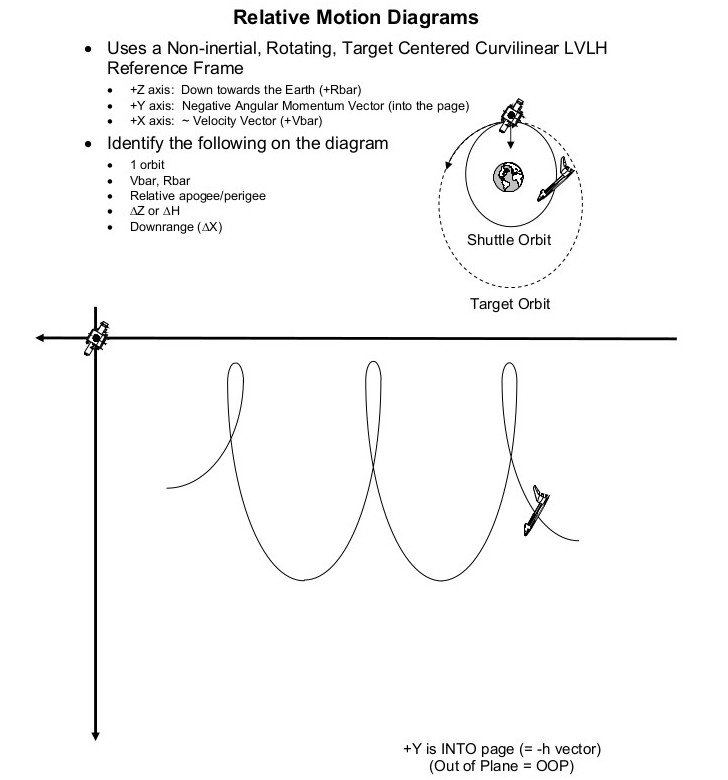 19
What is the "ISS's Keep Out Sphere" and what is its radius?

14
Orbital mechanics: trying to understand counterintuitive behavior (braking to overtake)
15
Do we sufficiently understand mechanics of Lagrange point stationkeeping for EML2 rendezvous and assembly?
8
Orbital rendezvous with low-thrust engines?
5
notation to describe an elliptical orbit? (3000km x 40000km)
3
Would an orbital scaffold or shipyard be useful?
15
What is the frame of reference for orbital speed?
2
The appropriate reference frame for the interplanetary missions
5
What is the purpose of orbital frame of reference for a satellite orbiting the earth?
20
Escaping moons conflict with what I understand of gravity
0
When B is directly below A, as shown, what's B’s velocity (in vector notation) relative to A?