What's the point/area of space called where there is equilibrium between 2+ different gravitational forces?

For some reason I want to call it a 'gravity well' but I know that a gravity well is just the gravitational force distribution in space due to an object with mass.

But regarding my question, isn't there some term that describes this 'sweet spot', like balancing on top of a ball, where the gravitational pull of both/all massive objects is equal, and therefore an object floating on the spot will have less of a tendency to drift about, unless, again much like being on top of a ball, it is perturbed slightly, causing a gradual pull in one direction.

I can't think of the word or description, but I know it must exist. It's hard to google something when you don't know what its called! Thanks in advance.

The term you are looking for is most likely Lagrangian point. Often synonymous, but sometimes used less strictly is Libration point.

It's important to be careful about exactly what we mean when we say "cancels out", "equilibrium" or "static".

When we have more than one body, they can't all be static. If they didn't move relatively to each other, their mutual gravity would soon make sure they do.

Said in another way, it's the gravity of both bodies, in addition to centrifugal force in the rotating frame of reference that together are in balance in some sort of tug of war game.

This can only happen in 5 distinct points: 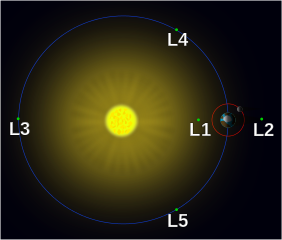 They are commonly denoted with the numbers above, L1, L2 and L3 on the same line as the parent bodies, and L4 and L5 60 degrees before and after (those two also happen to be stable). It's also common terminology to use abbreviations of the parent bodies' names to identify them, so "EML1" refers to the Earth-Moon L1 point.

There are no common cases of such points with more than two parent bodies involved, except for some exotic ones

Also of interest is that inside a uniform shell of mass, gravity in all directions cancel out (the shell theorem)

Not the answer you're looking for? Browse other questions tagged gravity terminology or ask your own question.

11
What is the difference between a "space-oriented" and an "Earth-oriented" satellite?
6
Is there a term for the distance from an object at which it's gravitational pull is negligible?
2
If you swam towards Earth from Space would there be a point when you started falling?
4
What's the difference between zenith and radial?
6
How much is the difference of gravity attraction between the highest and lowest point on Mars?
25
If human space travel is limited by the G force vulnerability, is there a way to counter G forces?
3
Is there a term that references the time delay between two objects communicating in space, especially at great distances?